Warren Buffett famously said (and repeated a lot of times) that he looks for businesses 1) he can understand; 2) with favorable long-term prospects; 3) run by honest and competent people and 4) available at an attractive price. Though Berkshire purchase of 11% stake in the Brazilian fintech company StoneCo (NASDAQ:NASDAQ:STNE) at IPO prices raised eyebrows of the investing community in 3Q 2018, there is no wonder this position deserves a place in the unique Berkshire equity portfolio if we carefully walk through the guide points mentioned above (whether Warren is responsible for the purchase or one of his leutenants).

StoneCo’s (STNE) primary business is merchant acquiring. It is integrated in a set of solutions which is a moving target and now is comprised of Software, Credit and Digital Banking lines (there was only Software a year ago). Software products are proprietary and are involved in active cross-selling with other products including payment processing. 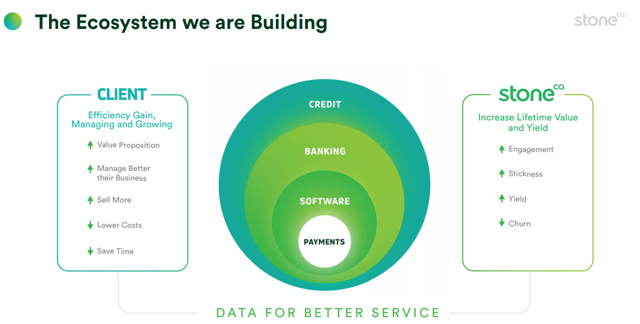 Economics of merchant acquiring are quite superior. In short, StoneCo is the second link of the payment chain: merchant (steakhouse, grocery store) – acquirer (StoneCo) – payment system (Visa, Mastercard) – card issuer (big bank that provides credit). It takes a percentage of each transaction from merchants that were ‘acquired’ by the company, i.e. that agreed to install StoneCo’s system and/or point of sales (POS) terminal. After the installation the company just collects cash from transactions and does not need to invest anything above that (and bears no credit risk). Sometimes it sends a specialist to solve problems.

That is why StoneCo enjoys 84% gross margin and 46% pre-tax margin (mrq). These numbers are up from 2018 because the costs are spreading across larger client base as the business scales up. And roughly 90% of earnings are converting into free cash flow (even without adjusting for growth capex). And this cash flow can be reinvested at very high rates of return as LTV/CAC=10 (i.e. $1 invested in acquiring new customers brings $10 in present value).

StoneCo’s targeted customer group is SMB. But why should merchants go to StoneCo if they can work with other payment processors like PagSeguro or with large banks (like Itau Unibanco)? Firstly, because of Amazon-like customer centricity including Stone Hubs – local operations from where sales and service teams interact directly with new clients in order to better understand their particular needs and build personal relationships – and so called Green Angels providing 24/7 customer support within hours. And secondly, because of highly valuable product mix that StoneCo offers to SMBs. By working with StoneCo merchants get access to new customers by processing credit card payments, software for working capital management, digital banking, factoring, credit that can be repaid with sales and new solutions constantly evolving. One such solution (Collact) gatheres information about customers from their payment patterns and helped one bakery to increase traffic by 8%. Another solution (Raio-X) discovered a food voucher routinely depositing merchant's money in the wrong bank account and also found hidden fees from another payment processor. All these factors contribute to an NPS (measure of customer satisfaction) of 65 for StoneCo against just 4 for competitors.

Brazil is a large country with 200 mln in population and just 28% card penetration. That significantly lags developed nations where this figure is around 80%. The gap is rapidly closing though: $375 bln digital payments market was up 17% in 2018 and is expected to grow at a 12% clip for the next five years.Government policies favor such developments and at least don't get in the way of young dynamic companies like StoneCo that are disrupting environment traditionally dominated by the largest banks.There are roughly 9000 SMBs in Brazil of which StoneCo has 310 000 as clients (+93% y/y). Revenues, margins and profits all reached record highs in 1Q 2019. Growth numbers are simply not representative (for example, profits were up 7-fold) and cannot be sustained over considerable periods of time. But obviously StoneCo is a growing company in a growing industry.It has 6% market share and management thinks this can grow to 25%. That sounds reasonable to me but are management claims trustworthy enough to make judgments based on their comments? (Cisco CEO claimed 50% long-term growth rate just before the bubble popped in 2000s either.)

StoneCo is no startup. It was found in 2012 by Andre Street and Eduardo de Pontes on the basis of several payment and technological platforms that Mr. Street and Mr. Pontes have been developing for over 10 years. Both have seats on the Board as a Chairman and Vice Chairman. Mr. Street also serves at the Board of Lojas Americanas and likely brought 3G Capital to IPO.

Extensive information on the management team is provided by the company itself: Corporate Governance | StoneCo Ltd.

In short, all the managers seem to be honest and capable. Many of them used to run their own businesses (that helps with owner orientation). Augusto Lins (President) have built a successful career in banks - StoneCo's competitors - and knows their systems from inside. Rafael Martins (IR Executive Officer) is from 3G.Thiago Piau's results as CEO are excellent until now. He writes extensive shareholder letters and his discussions at conference calls are very informative and not just about how good things are. Long-term mind and transparency with shareholders seem to be in place (3G and Berkshire are a good margin of safety here).

I'll be short on this one. If the management is right and StoneCo can grab a 25% market share from the market growing at an 8% rate (we'll take more conservative number) than the company's earnings power might be somewhere in $800 mln range (assuming 2% take rate and 30% profit margins). That's from current operations. It will certainly earn something from other solutions like Credit which has an addressable market almost 4x larger than for merchant acquiring. I don't know how to estimate the real potential for this so I'll try to stay conservative and assume 30% contribution to earnings from other solutions. That gives us roughly $1 bn in future earnings power. 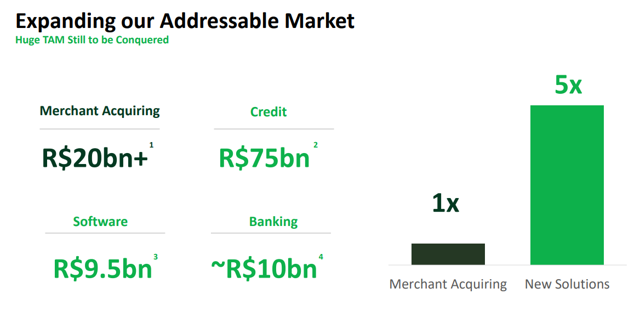 If this point is 5 years away (that implies 59% growth rate, below current pace) than the present value of the company's future earnings is around $51 a share. If it's 10 years away (26% growth rate, well below current pace) the NPV is $35 a share. Let's say there is a 30% chance of the first scenario realization and a 70% chance for the second. Then the weighted average value per share should be $40. Share price at the time of writing is $25.5.Competitors are trading at multiples north of 25: Fiserv is a $33.7 bln company with $1.2 bln in earnings, WorldPay is $37 bln on $1.45 bln in estimated earnings and PayPal is $130 bln ($2 bln in earnings). Bankruptcies in the area are rare. The last big one was Cynergy Data in 2009 and it was levered up significantly which is not the case with StoneCo.

StoneCo is a wonderful business avaliable at an attractive price. The road to intrinsic value is going to be bumpy though. In conclusion, take a look at the charts showing first years of trading for StoneCo and Square. 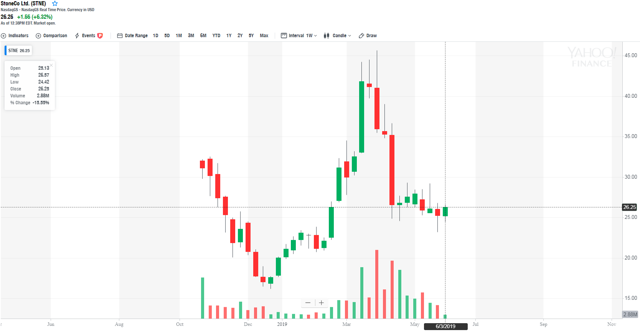 Aton Value
185 Followers
I work as an analyst at the investment arm of Aton Group. Aton is the largest private financial holding in Russia. We have close ties with our partners in Switzerland and the U.S. and are seeking to drive change in our domestic financial market - particularly in the Asset management business. In 2018 we launched a project aimed at building a value investment fortress in Eastern Europe. My articles mostly contain special insights in EM economies because, so to say, I can 'see, smell and touch' businesses here. But I also provide any other ideas which I regard as being inside of my circle of competence.
Follow

Disclosure: I am/we are long STNE. I wrote this article myself, and it expresses my own opinions. I am not receiving compensation for it (other than from Seeking Alpha). I have no business relationship with any company whose stock is mentioned in this article.