Based on our analysis using the artificial intelligence at the core of the Variable Changing Price Momentum Indicator (VC PMI), we find that the weekly trend momentum for the E-mini S&P 500 is at 2882. Therefore, the VC PMI is giving us an indication of a bearish trend momentum coming into this week because the market closed below that level at 2752.50. 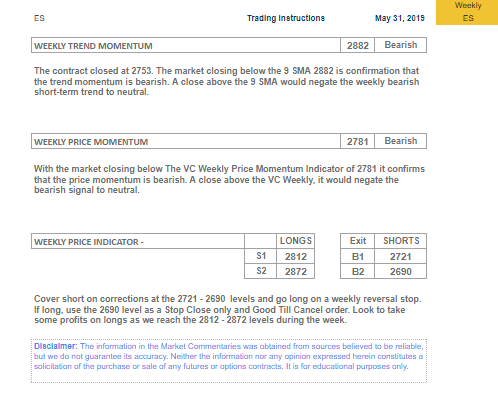 The Alternative: Change to Neutral?

The VC PMI artificial intelligence, however, always gives us the alternative. If the market were to close above 2781, which is the weekly average price, it would negate the weekly VC PMI average price, which has activated a bearish signal and change it to neutral.

When the price closes below this average price or pivot level, the artificial intelligence of the VC PMI automatically activates the level below as the target; in this case (B1), 2721 as the target for next week.

If the market does not come down to test that level and instead closes above 2781, it would negate this bearishness that we have coming into this week and would neutralize it. A second close above 2781 automatically would activate the sell 1 (S1) level above the mean of 2812 to the sell 2 (S2) level of 2872.

Testing Extreme Levels Below the Mean

The market's inability to close above the S2 level of 2872 sometime at the end of May activated the continuation of this pattern to the downside to test the extreme levels below the mean. The S1 and S2 levels act to confirm and validate that those levels represent the distribution of supply, which the VC PMI's artificial intelligence gives you as specific entry points. If the market tests those levels and closes below, it activates a bearish trigger point by identifying a target, which is the level below.

"The VC PMI does not take into account any fundamentals in the marketplace, such as trade wars or political crises," MontesDeOca stressed. It simply creates a mathematical structure for you to use, as a day trader, daily; as a swing trader, weekly; or as a long-term trader, monthly.

It gives you the extreme above the average price by identifying the highest probability trigger points at which to enter a trade. The initial signal is activated the first time when the price touches that level, which is the setup or trigger point using the 15-minute bar. The close of the second 15-minute bar after the setup is your trigger point. If the market closes above the pivot point or level, it would activate a trigger: above is bullish, below is bearish. It automatically identifies your stop below your entry point above if you are long and below if you are short. When the price reaches these levels, it recommends that you go neutral again and allow the process again to be rotated at a new level.

In the case of the E-mini S&P 500 for this week, we are coming in with a bearish price momentum. We are waiting for the price to either indicate a continuation of this bearish trend down to the next level or a reversion to the mean from the B1 level of 2721. We want to watch the market closely next week and see how the market reacts to what appear to be extremely oversold conditions in the E-mini S&P 500 market.

We use the proprietary Variable Changing Price Momentum Indicator (VC PMI) to analyze the precious metals markets and several indices. The primary driver of the VC PMI is the principle of reversion to the mean ("Mean Reversion Models of Financial Markets," "The Power of Mean Reversion in Factor-Based Investing"), which is combined with a range of analytical tools, including fundamental logic, wave counts, Fibonacci ratios, Gann principles, supply and demand levels, pivot points, moving averages, and momentum indicators. The science of Vedic Mathematics is used to combine these elements into a comprehensive, accurate, and highly predictive trading system.

Mean reversion trading seeks to capitalize on extreme changes in the price of a particular security or commodity, based on the assumption that it will revert to its previous state. This theory can be applied to both buying and selling, as it allows a trader to profit on unexpected upswings and buy low when an abnormal low occurs. By identifying the average price (the mean) or price equilibrium based on yesterday's supply and demand factors, we can extrapolate the extreme above this average price and the extreme below it. When prices trade at these extreme levels, it's between 90% (Sell 1 or Buy 1 level) and 95% (Sell 2 or Buy 2 level) probable that prices will revert back to the mean by the end of the trading session. I use this system to analyze the gold and silver markets.

The main strength of the VC PMI is the ability to identify a specific structure which price levels traders can execute with a high degree of accuracy. The program is flexible enough to adjust to market volatility and alerts you when such changes take place, so one can adjust strategies accordingly. Such changes include when the market breaks out of a consolidation phase or a trend accelerates. Such volatility usually happens when the market has produced a signal at the S2 or B2 level, and the market closes above or below these extreme levels.

The day trading program then confirms that a higher fractal in price has been identified, and the market will move significantly higher, although the same principle applies if the market falls significantly. The price closing above the S2 level indicates that the buying demand is greater than the supply. This means that the market has found support for the next price fractal. Conversely, the price closing below the B2 level indicates that the selling pressure has met demand greater than supply at the extreme below the mean and prices should revert back to the mean.

The basic concept of the VC PMI is that the program trades the extremes of supply and demand based on the average price daily, weekly, and monthly.

The strongest relationship we find in the algorithm is when the daily price is harmonically in alignment with the weekly and monthly indicators. We call this "harmonic timing." Such an indication produces the highest probability (90%) that the price will revert from these levels to its daily, weekly, or monthly average.

Disclosure: I am/we are long SPXL. I wrote this article myself, and it expresses my own opinions. I am not receiving compensation for it (other than from Seeking Alpha). I have no business relationship with any company whose stock is mentioned in this article.