Companies such as Nio (NIO) and Tesla (TSLA) are founded on the idea of transitioning automotive transportation away from ICEs to BEVs. Incumbent automakers, on the other hand, have a large base of installed production focused on ICEs and are only now starting to compete in the BEV space. In this article, I take a look at the adoption curve for EVs in general. I use a 3-group transition model where the groups are Enthusiastic Early Adopters (EEA), Die-Hard Skeptics (DHS) and the Swayable Middle (SM), and transition rates between these groups determine the ultimate adoption curve. I conclude with some statements on the relative merits of investing in pure EV plays versus incumbent players transitioning away from ICEs and the role of geography on those merits.

Let’s start with some data from California on the share of various EV technologies as a percent of new car purchases. CA is a good example to look at because it is not as extreme as Norway or China in terms of subsidies or taxes on ICE vehicles but has a public generally open to green ideas. 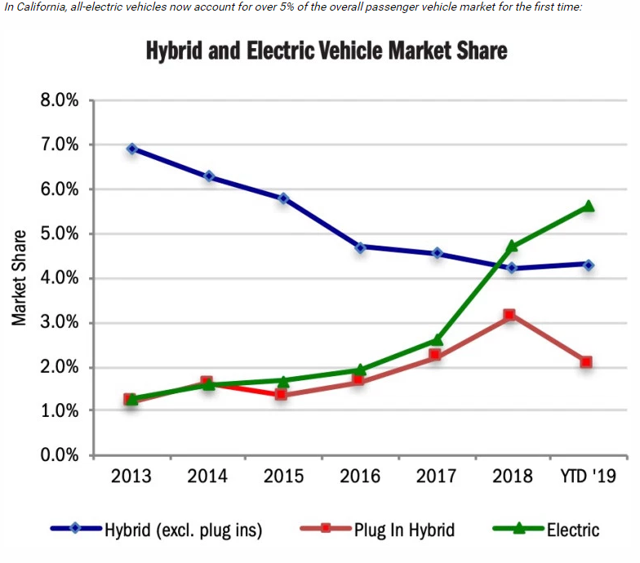 We can see an S curve with linear growth in the 2013-15 period, an exponential phase from 2015-18. After that, it appears we may be entering the log phase of the S curve (note that the economy-wide slowdown in vehicle sales does not explain the 2019 slowdown since the graph is market share, not units), though it is too early to be completely sure. Furthermore, the fact that 2019 is not yet complete also doesn’t impact this chart, again because it is market share and not units. Finally, it appears that at least some of the BEV adoption has been at the cost of hybrids, with PHEVs growing more slowly to around 2%.

Next, let’s look at the adoption curve (from a presentation by BlackRock) of a number of different technologies. 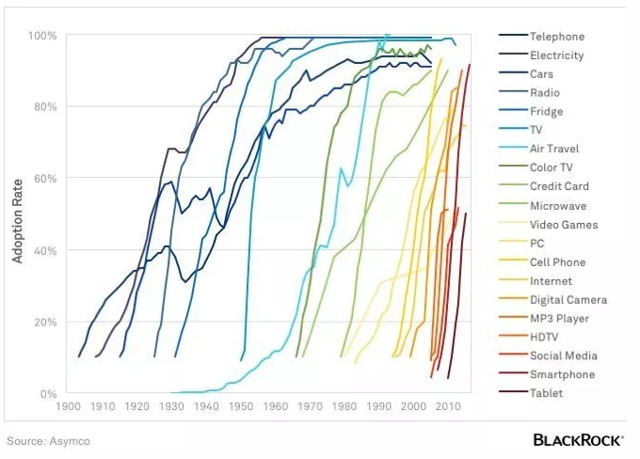 As we can see, recent inventions such as the smartphone, tablet, digital camera have had almost vertical adoption curves, where the technology went from almost no one using it to almost everyone using it in a relatively small number of years. Other technologies, such as mass air travel and cars, took considerably longer to be widely adopted, ranging from 30-50 years to be used by the majority of the population. To understand where BEVs may fall, it is important to understand the components driving these transitions, which include major factors such as cost (expensive products take longer), enabling infrastructure (airports and navigation beacons for air travel, highways and gas stations for cars) and whether the old technology is displacing a competing old technology (horse and buggy for cars and land lines for cell phones) or is completely new (TV, fridge, PCs) to consumers. Additionally, to compare across regions and to understand the BEV transition in particular, it is useful to introduce the three-group model.

The three-group model (for example, see Multi-Group Adoption Models) posits that consumers can broadly be grouped into three largely distinct groups. The first group is the Eager Early Adopters. These are people who are novelty-seeking, are willing to spend money on a not-widely-adopted technology (potentially more than on an existing product that is being replaced) and don’t require supporting infrastructure to be as well-developed (so they will install chargers at home, are ok with changing their road trip rest stop patterns to adjust for charging times). The second - and largest - group is the Swayable Middle.

If a technology becomes cost-competitive (either naturally by increasing production efficiency, or by the government imposing costs on competing products or providing subsidies on the new product), they will tend to transition to the new technology as the supporting infrastructure is fully built out. Transition rates of the SM group, combined with how long-lasting the old product is (for example, if everyone holds their old vehicles 10 years, a 100% transition rate for the SM group would imply full adoption by this group over 10 years), largely determine the shape of the adoption curves in the graph above. The final group, die-hard skeptics (DHS), are novelty-averse and tend to resist change even when the new technology has clearly demonstrated benefits. For example, to this day, there are people who will not fly in a plane (fear or lack of desire to travel can explain most of this group) or who do not use cell phones or the internet. This group tends to be larger when there is an existing technology for the same purpose that works “just as well” and tends to stay large for longer with the most expensive, long-lasting products.

Using the 3-group Model on BEVs

Evidence from Norway suggests that making BEVs very cost-competitive (in their case by making ICEs cost almost twice as much) can force the SM group to transition within a decade. But what about the majority of the world, where at most small subsidies are provided to BEV producers (in the form of ZEV credits to consumers or GHG payments among producers)? Using the CA data from the first chart suggests that the EAA group is somewhere under 10% of the population (certainly in CA, and perhaps quite a bit lower in the rest of the country). Running with this idea, let’s assume that the SM group is 80% of the population, and as charging infrastructure develops, they are open to buying BEVs. What are other factors that will determine whether an SM member switches and which brand they will switch to?

- Up-front costs: Consumers tend to look at the sticker price when making cost comparisons. Even though the ongoing maintenance and fueling costs may be lower, they will tend to want to see sticker prices on BEVs close to their current models. This is where government incentives, discounts or taxes on ICEs can come in.

- Safety concerns: They will want to know that the new technology is not increasing risk to them while parked in their garage or in an accident.

- Availability of brands and models: SM consumers tend to comparison-shop. They look at things like Consumer Reports, compare reliability data (which the EAAs have generated for them over the first 5-10 years), test-drive and feel the interiors. Because almost everyone who already owns a car has bought one at a local dealer, they will want an experience that gives them a similar experience in terms of the positives (being able to sit in different models and test-drive at least a few).

- Service and Reputation: Over time, as some companies provide great service both in the showroom and when cars need to be serviced or repaired, EAAs will tend to post reviews, fill out surveys, etc. SM consumers tend to use EAA data to inform their purchase decisions.

Because the transition probability of the SM group is not yet directly observable, and it is an open question how the arrival of multiple makes from the likes of Volvo (OTCPK:VOLAF), VW (OTCPK:VWAGY), Audi (OTCPK:AUDVF), Porsche (OTCPK:POAHY), BMW (OTCPK:BMWYY) and Nissan (OTCPK:NSANY) will affect the transition rates in NA and the EU, the best we can do for now is to look at a range of possibilities.

For China, a separate analysis would be needed. As the graph below shows: 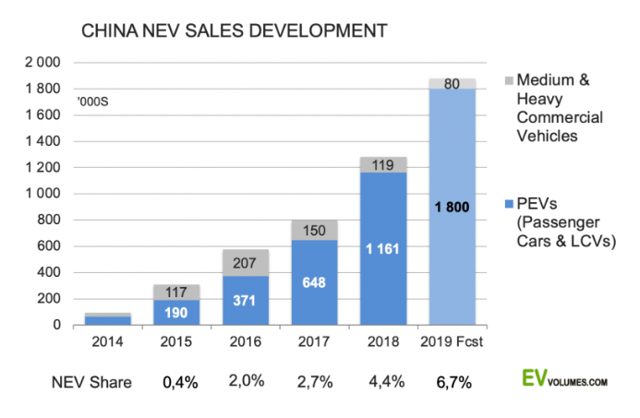 EV adoption in China (which has been providing strong incentives for NEVs (New Electric Vehicles) but not making ICEs quite as costly as Norway has, but has more car sales each year than Norway has people) has just approached 7% of new cars, but it still appears to be in the acceleration phase.

We note that in China, the NEV category, which is the only category which is easy to purchase in the major cities, includes hybrids and PHEVs. Because the major cities have basically stopped giving out new license plates to traditional vehicles (new green colored plates are being given out to BEVs, PHEVs and HEVs, as well as HFCELs), at least in those locations we can expect full-scale adoption within the next decade or so as old ICE vehicles are replaced.

Adoption In North America and the EU

Assuming annual transition rates of 15%, 20% and 25% among the SM group leads to the following table:

However, the table above is global. The transition rates above would be hard to achieve outside of China and Norway in the absence of cost parity, a built-out infrastructure, or much in the way of consumer choice amongst brands. Indeed, the North American share of the 9 million units above would correspond to slightly above 2 million EV units in 2021. Combining all of Tesla's planned production and all EV production planned by competitors for the US by then, it is unlikely that more than 1 million EVs will be sold in the US in 2021, suggesting that the ATR in the US will be much lower than 15% even if consumers want it to be higher.

Given the inherent uncertainties of the BEV transition outside of China, it appears that the safest bets (if one were hell-bent on investing in automakers) would be to either invest in profitable automakers with a strong EV presence in China (which naturally includes the top Chinese NEV makers such as BYD Company (OTCPK:BYDDF)) or those with a mix of ICEs for North America and the EU who are in the process of scaling up their EV manufacturing using their ICE profits in a China-facing way (Volkswagen and BMW come to mind). If you accept the above strategic argument as a first filter (naturally, an analysis of the balance sheet, income statement and various profitability metrics would be a second filter), investors' fascination with Nio and Tesla, in particular, becomes a bit mystifying.

Long-Short Manager
1.39K Followers
I run two funds, one a diversified global income fund targeting about a 4-4.5% annual withdrawal rate for life, and a long-short aggressive fund that is a global cross asset class fund.
Follow

Additional disclosure: I am also long BYD. My positions in TSLA are of a shorter-term nature and can change at any time.