There continues to be a great deal of skepticism about whether China is actually growing at 6.5%/year. Here is China expert Michael Pettis, in a blog post from January of this year:

The Chinese economy is not growing at 6.5 percent. It is probably growing by less than half of that. Not everyone agrees that the rate is that low, of course, but there is nonetheless a running debate about what is really happening in the Chinese economy and whether or not the country's reported GDP growth is accurate.

The reason for the widespread skepticism is the disconnect between the official data and perceptions on the ground. According to the National Bureau of Statistics, China's economic growth in every quarter last year exceeded 6.5 percent. While that is much lower than the heady growth rates China has experienced for most of the past forty years, it is still, by most measures, a very brisk rate of growth.

And yet, when you speak to Chinese businesses, economists, or analysts, it is hard to find any economic sector enjoying decent growth. Almost everyone is complaining bitterly about terribly difficult conditions, rising bankruptcies, a collapsing stock market, and dashed expectations. In my eighteen years in China, I have never seen this level of financial worry and unhappiness.

Pettis is very knowledgable about the Chinese economy, having taught at Beijing University for 18 years. So it's obviously possible that he's correct. But I just can't make the pieces in the slow growth story fit. I see too many data points that don't fit the picture he describes.

I will be traveling to Beijing later in the summer, and was just reading about the new Beijing airport, which will open in September. It will handle 100 million passengers a year, on top of the 100 million a year at Beijing's "old" airport (which is also pretty new and is bursting at the seams.) So it occurred to me that the airline industry might be a good barometer of China's growth. After all, it represents a cross section of tourism and business travel, a good barometer of a modern economy.

Of course I do understand that flying is a luxury good, and that air travel will grow faster than RGDP in a developing country. Nonetheless this data is pretty impressive: 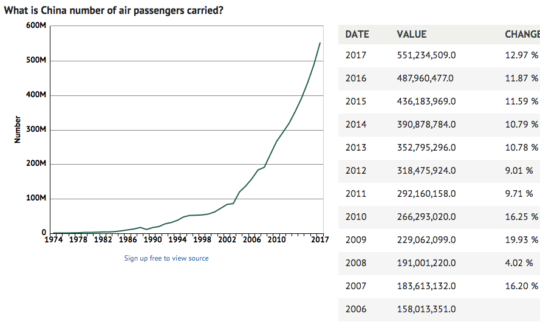 That's way more impressive than the US, where RGDP has been growing at roughly 2%/year:

And it's also a bit faster than Indonesia, another geographically large, populous, and fast-growing (5% to 6%) East Asian economy:

Now for some caveats:

Two billion riders in 2018! I recall commenters a decade ago telling me that the Chinese would not be able to afford to ride these trains. It seems plausible that at least 10% of that travel is on long routes such as Beijing-Shanghai (roughly as long as New York to Chicago.) That's important because in both the US and Indonesia, flying is basically the only way for most people to quickly move that sort of distance. So while Indonesian air travel has increased 2.5 times from 2007-17, and Chinese air travel has increased 3-fold, the combination of Chinese air travel plus long trips on high speed rail has probably increased at least 4-fold, if not more. That is consistent with China growing quite a bit faster than Indonesia.

Admittedly, the Pettis quote (from January) referred to the recent past, presumably economic conditions in 2018. But elsewhere I discovered that 2018 was another boom year for Chinese airlines, with traffic rising another 11.4% to 610 million.

Is it possible that the airline passenger numbers are just as "fake" as people allege the GDP numbers to be? Anything is possible, but think how big the conspiracy would have to be. Are the airport passenger numbers also faked? Is Beijing airport not actually handling 100 million passengers a year? Are Boeing (BA) and Airbus (OTCPK:EADSF) faking their claims to export hundreds of jets to China? How deep would this conspiracy have to be?

To be fair, Pettis doesn't make that argument, and indeed specifically refers to sectoral data in support for his claim that Chinese growth has slowed sharply. Perhaps there are sectors that support that view. But it seems to me that if there truly were a major slowdown, then you'd expect it to show up in the airline passenger data for 2018. Airline travel is a cyclical industry.

I look forward to my first visit to China since 2012, and will report back on what I see.

To summarize, based on the above I doubt that actual Chinese growth is more than 1% below the reported figures, at least up through 2018. Of course it's possible that things have changed in 2019; if so I expect that to show up in upcoming airline travel data for China.

PS. Pettis also has a post arguing that China's large purchases of US debt do not represent a weapon that they can use in trade negotiations. I agree with his basic analysis, although I differ with his view that a smaller US trade deficit helps the US economy.

Scott Sumner
1.08K Followers
Bio My name is Scott Sumner and I have taught economics at Bentley University for the past 27 years. I earned a BA in economics at Wisconsin and a PhD at Chicago. My research has been in the field of monetary economics, particularly the role of the gold standard in the Great Depression. I had just begun research on the relationship between cultural values and neoliberal reforms, when I got pulled back into monetary economics by the current crisis.
Follow
11 Comments