First, a quick rundown of the accounts we are discussing:

Remember, the goal here is to tap into the accounts for the funds you need during retirement while keeping your taxable income in any given year to a minimum.

However, each individual is different so it's hard to give a one size fits all answer. There are multiple paths to consider. We will take a very general approach to the withdrawal strategy. 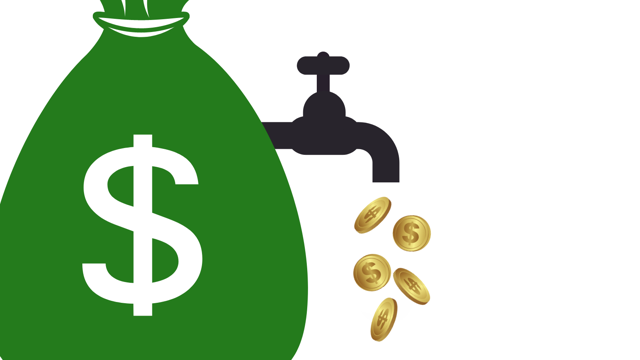 In your taxable, you will have assets that have created some cash flows like dividends and interest. Or perhaps you sold a mutual fund and created a capital gain. These would be taxed anyway, so it's better to use these funds rather than reinvest them and have to sell a tax deferred asset to withdraw for your spending needs.

Also, generally speaking, a brokerage account has assets that are less tax efficient anyway, so burning through these first will reduce your overall tax burden in the future. It will also allow the IRA portfolio years more of growth to increase its balance. All things equal, the IRA will always grow faster than the taxable (assuming the same investments and dollar value) since the IRA doesn't have the tax drag associated with the taxable account (on interest, dividends, capital gains).

If you still need money in excess of the regular income that is created (interest, dividends, etc.), we would then say start spending from your taxable portfolio in a way that minimizes taxes. So start with assets at a loss, and then assets at no gain or loss, and then sell assets at gains. 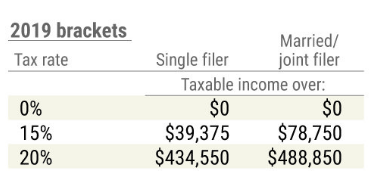 Also another point to remember is that there is a 10% penalty to withdraw from an IRA or 401k before the age of 59 1/2. So for those under 59, all withdrawals should be first from your taxable accounts.

Second Withdrawal: The next place is with Traditional IRAs and 401k accounts. These have Required Minimum Distributions (RMDs) and are required by law. So again, if you are over age 70 1/2, you would have taken your RMD first, then moved to the taxable account as seen in point #1. When you make your withdrawals from these accounts, you will be taxed at ordinary income rates.

If you have multiple Traditional IRAs, you can withdraw from each of them. But the more efficient move is to sum the assets from all your accounts and take one withdrawal from a single IRA. You can also consolidate them into one IRA to simplify things and make future RMD computations easier.

You can pool your distributions for 403b plans, too, but you can’t mix them up - say, by making withdrawals from an IRA to meet your RMD requirements for a 403b plan. Similar accounts have to be pooled together. Also, 401k plans can’t be pooled to compute a single RMD. To streamline those, roll them into an IRA.

Note on Withdrawals #1 and #2: Another strategy is to blend #1 and #2; take some from each. As Michael Kitces suggests:

...By taking at least some withdrawals from the IRA every year, the brokerage account lasts longer before it is ever depleted (avoiding the point where the retiree must take all distributions from the IRA because there’s no other money left).

By taking the blended-distribution approach, the portfolio lasts significantly longer..., driven by both the fact that “most” of the IRA still enjoys tax-deferred growth for an extended period of time, and more significantly because the annual distributions are modest enough to avoid ever hitting the 25% bracket!

Third Withdrawal: Tax free accounts like Roth IRAs and Roth 401ks should come next. These will have no tax owed and do not require RMDs.

Like we said, everyone's situation is different, and the farther we get down the list, the more personalization there is in the strategy.

A lot of people may have part-time income when they retire or they may have rental income or things like that. So when they retire, they may actually be in a higher tax rate, in which case we would say spend from your tax-free assets — your Roth assets — upon retirement; and then spend from your tax-deferred assets later when your tax rate is lower.

Here's a handy summary from Betterment on how accounts are taxed differently: 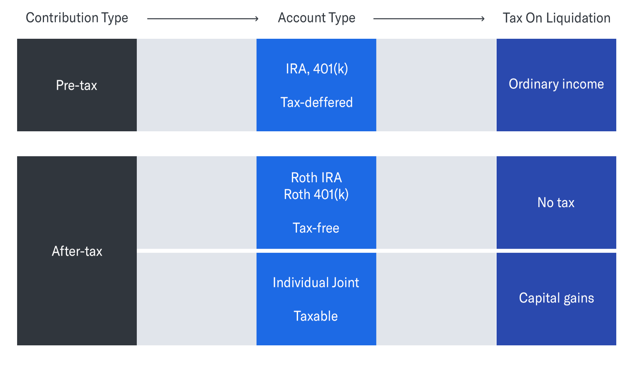 Lastly, remember just because the account is tax deferred, it doesn't mean it is generally better. By using this strategy, sometimes the IRA can grow so large that when it is finally tapped at age 70 1/2, the RMDs can be so large that the retiree is pushed into a higher tax bracket than they are used to.

So, revisiting Michael Kitces again, the fundamental goal is to spend from the portfolio in a more tax-efficient manner and to find constructive ways to whittle down a pre-tax account and stop it from growing too large, either by taking distributions outright at an earlier phase, or by using another method such as partial Roth conversions.

Of course, if “too much” is withdrawn or converted in the early years, the retiree may drive up their tax rate now, which doesn’t help the situation either. In other words, the end goal is to find the balance point between the two.

Also, by spending down taxable and tax-deferred accounts first, leaving just your Roth IRA, could put you in a situation of negative taxable income. Meaning deductions would exceed taxable income. If Social Security was your only income source, it wouldn't be taxed. The standard deduction would still apply and likely be wasted. Any strategy that doesn't take advantage of valuable deductions is inefficient.

Again, there is no one-size-fits-all approach to this. However, I think we have hit on the issues that would affect a majority of retirees out there and at least given something to think about for everyone else...

Our Yield Hunting marketplace service is currently offering, for a limited time only, free trials.

Our member community is fairly unique focused primarily on constructing portfolios geared towards income. The Core Income Portfolio currently yields over 8% comprised of closed-end funds. If you are interested in learning about closed-end funds and want guidance on generating income, check out our service today.