Here's a look at the price of gold and why it's primed for a rally, and top news in the gold mining sector for May.

I'm here to provide you with the top news in the gold mining sector for May of 2019, in what was yet another eventful month for gold and silver mining shares.

Here's some commentary on current gold prices and where I think prices could be heading this year (and beyond), followed by the top news in the mining sector for May 2019.

We're Entering The Best Time Of The Year To Buy Gold

I remain bullish on gold (NYSEARCA:GLD) despite its weakness in May.

I believe gold prices remain in a long-term secular bull market, and have been in a consolidation pattern over the past few years, but could be ready for a breakout sooner rather than later.

Gold prices typically show weakness in the month of May and then bottom out in late-June, only to see prices take off in the fall, according to research posted at GoldSilver.com.

According to the analysis that is based on average monthly gold prices dating back to 1975, gold prices essentially remain flat from April to July, but then rise on average by 1.71% in September and .96% in October.

Knowing this, the best month to buy gold and gold miners (NYSEARCA:GDX) is during its weakest months - May to August - and the best quarter to buy is typically the third quarter of the year.

Based on the averages, it makes sense to load up on gold and its related equities before the summer is over, as we head into the stronger months for gold.

Gold has been rallying to start the month of June but is nearing overbought levels on the relative strength index. The price could certainly rally further to its late-February highs of $1,350/oz, but I would caution that it can lose those gains if the U.S.'s trade dispute with Mexico is somehow resolved (the two countries plan to meet on Wednesday). 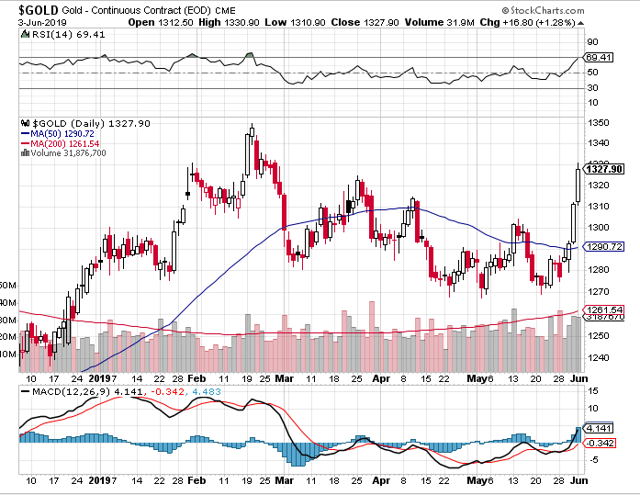 Long term, I believe the price of gold remains in a secular bull market. One billionaire thinks the price of gold could rally as high as $5,000 an ounce within the next decade - a five-bagger from current prices. I've shied away from such bold predictions (I think $2,000/oz is attainable), but I would argue that very large gains would be made in the mining sector even if gold increased just 20% to 50% from its current price of $1,300 per ounce.

I continue to buy shares of quality gold miners and look forward to dollar-cost averaging my positions over the next few months, ahead of a potential rally in gold (prices have just begun rallying, too, on the U.S.'s trade war with Mexico). I also plan on adding new money to my portfolio in the coming month. Subscribers of my marketplace service receive access to my full portfolio holdings, top picks for 2019 and buy/sell/hold recommendations on various miners.

Here's a look at some of the top news in the gold & silver mining sector this past month.

Top portfolio holding Kirkland Lake Gold (KL) absolutely crushed it on its latest earnings report; the results included record net earnings of $110.1 million, or $.52 per share (up 120% from Q1 2018), and record free cash flow of $93.1 million (up 114%). Super high margins and a best-in-sector balance sheet should lead to continued share price strength.

Yamana Gold (AUY) did not do as well, but still had a decent quarter. Yamana's production exceeded expectations and the company's all-in sustaining cash costs came in at $865/oz on a by-product basis. But earnings were impacted higher copper cash costs and gold in inventory that was not sold in the first quarter.

Unfortunately, IAMGOLD (IAG) had one of the worst quarters in the mining sector. The company reported net loss attributable to equity holders of $41.3 million, or $0.09 per share, and net cash from operations of just $8.8 million. Total cash costs rose by 20% over last year due to lower production; all-in sustaining costs came in at $1,086 per ounce, up 14% from the same prior year period.

I noticed that small gold royalty company Ely Gold Royalties (OTCQB:ELYGF) bought its first producing royalty, a .75% GRR on the Isabella Pearl Mine in Nevada, which is operated by Gold Resource Corporation (GORO). The royalty cost $300,000 to purchase.

I'm familiar with Ely Gold Royalty because it used to own part of the Mt. Hamilton project in Nevada, which Sandstorm Gold (SAND) owns a 2.4% NSR on. It sold its stake in the mine for $6 million to Waterton.

Ely Gold’s purchase of this royalty was its fifth transaction it completed on Gold Resource's Nevada Mining Unit. Ely Gold is a tiny company with a market cap of just C$16.75 million, but it owns a package of promising royalties in Nevada.

Gold junior Great Bear Resources (OTCPK:GTBDF) continues to put out high-grade drill results. Its latest drill results at the Dixie Project in Red Lake, Ontario, included 28.37 g/t gold over 3.70 meters; 12.33 g/t over 14 meters, and 30.90 g/t over 4.60 meters. However, readers should note that true widths, or thickness, on these drill results have not been determined.

Ontario's Harte Gold (OTCPK:HRTFF) announced an $82.50 million financing package, consisting of $72.5 million in debt and $10 million equity, while also receiving approval to expand its Sugar Zone mine from 540 tonnes per day to 800 tpd. This will allow the company to expand production to 65,000 ounces per year by 2020.

Junior gold explorer GT Gold (OTC:GTGDF) has landed and closed on a big strategic investment from Newmont Goldcorp (NEM), via a C$17.6 million private placement of 11.489 million flow-through common shares. The financing was done at C$1.53 per share, a significant premium from its current stock price of C$.89. Newmont Goldcorp now owns 9.9% of the company.

GT Gold will use the funds to advice its gold-copper discoveries in British Columbia's Golden Triangle.

Gold junior Barkerville Gold Mines (OTCPK:BGMZF) has updated the gold resources at its Cariboo project in British Columbia. The company says that its measured and indicated resource has grown by 50% to 2.4 million ounces, while inferred resources total 1.5 million ounces.

The company will look to conduct more infill drilling to better define the resource, while also further expanding the resource along the 67-kilometer mineralized trend it controls at Cariboo.

This news release is also positive news for Osisko Gold Royalties (OR), which owns a 2.25% NSR royalty on the project.

Struggling silver miner Endeavour Silver (EXK) has announced several cost-cutting moves as lower silver prices have put it in a tough spot. The company has cut operating and administrative costs, reduced the employee and contractor workforce by 18% and deferred all discretionary expenditures.

It noted that the moves won't pay off until Q3 2019, when it expects to begin producing positive free cash flow.

SilverCrest Metals (SILV) has announced some pretty strong economics for its PEA study on the Las Chispas project in Mexico. The results are preliminary in nature, but show the significant potential of the deposit and could lead to increased takeover interest. The results include:

SilverCrest intends to complete a feasibility study on Las Chispas, scheduled for H1 2020.

Barrick (NYSE:GOLD) has offered to buy out the troubled Acacia Mining for $787 million, or $285 million worth of Acacia shares which it already does not own, an 11% discount from its own valuation of the company.

Acacia's largest shareholder Fidelity International has rejected the offer, calling it about 50% too low.

The top news of the month goes to...

As I stated in coverage, St. Barbara is slightly overpaying for Atlantic Gold (OTCPK:SPVEF), as it pays C$802 million worth for a gold mine that is profitable, but currently producing less than 100,000 ounces of gold per year. It is essentially betting on a successful expansion of the mine to 200,000+ ounces per year. While it's not a steal, it's still a better deal than what Alamos Gold (NYSE:AGI) paid to acquire Richmont Mines (NYSEMKT:RIC) and its Island Gold mine.

Who could be acquired next? I think you should keep an eye on Canadian-focused companies in particular.

Did I miss any top news this past month?

If you want more gold mining stock analysis, please consider subscribing to The Gold Bull Portfolio. I'm dedicated to helping my subscribers find the best money-making opportunities in the gold and silver sector.

Subscribers receive frequent updates on gold mining stocks, access to all of my top gold and silver stock picks and my real-life gold portfolio, buy and sell recommendations, and 24/7 live chat. A 2-week free trial is available for a limited time only!

Disclosure: I am/we are long KL, SAND. I wrote this article myself, and it expresses my own opinions. I am not receiving compensation for it (other than from Seeking Alpha). I have no business relationship with any company whose stock is mentioned in this article.

Follow Gold Mining Bull and get email alerts
+
Add a comment
Disagree with this article? Submit your own.
To report a factual error in this article, click here.
Your feedback matters to us!