Until about a month ago, I had never heard of Triton International (NYSE:TRTN), the world's largest lessor of the containers used in container shipping. Almost at random, a coworker of mine and I started chatting about investing, and we wound up sharing thoughts on some potential stock picks, and this intriguing company was on his watchlist. 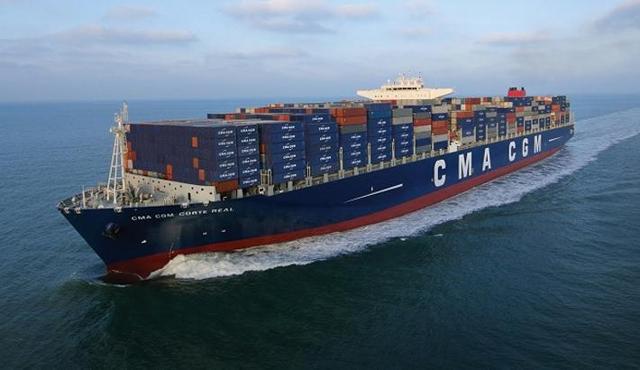 After an initial glance at the chart and seeing that its performance over the last three years returned 30%, along with a current dividend yield at over 6%, I determined that a deeper look in this case might be merited. Shipping is an industry I had painted with a broad brush of being pretty sketchy, so I have stayed clear of it so far. But as I studied Triton's business model as a lessor rather than being a shipper, along with its capital structure, and learned a little more about the overall trends in container shipping, I found that there is a good deal of potential here.

So, what makes a company that serves an industry I assumed to be struggling do so well? Its very business model seems to be built to better withstand some of the challenges the shippers themselves face.

In a nutshell, Triton International buys new containers and then leases these containers to the shippers for a set period of time [such as CMA CGM, which is its largest client], which provides relatively steady and predictable revenue to Triton on the one hand and saves the shippers the relative risk of owning outright large excess capacity in containers they may or may not need in the future. Between 2019 and 2023, the highest level of lease expirations as a percentage of the fleet total in any single year of dry containers is 2023, at 5.5%, and 2021 at the lower bound of 2.5%, with average lease rates in line with 2018 market rates. Triton is then left with the option of either leasing a container again or selling it as a used container. So, even if container shipping would happen to slow down somewhat due to tariffs or other forms of trade disputes, Triton has some reasonable runway with which to work due to the existing leases on the books providing regular revenue and allowing some time for any trade actions to be resolved. 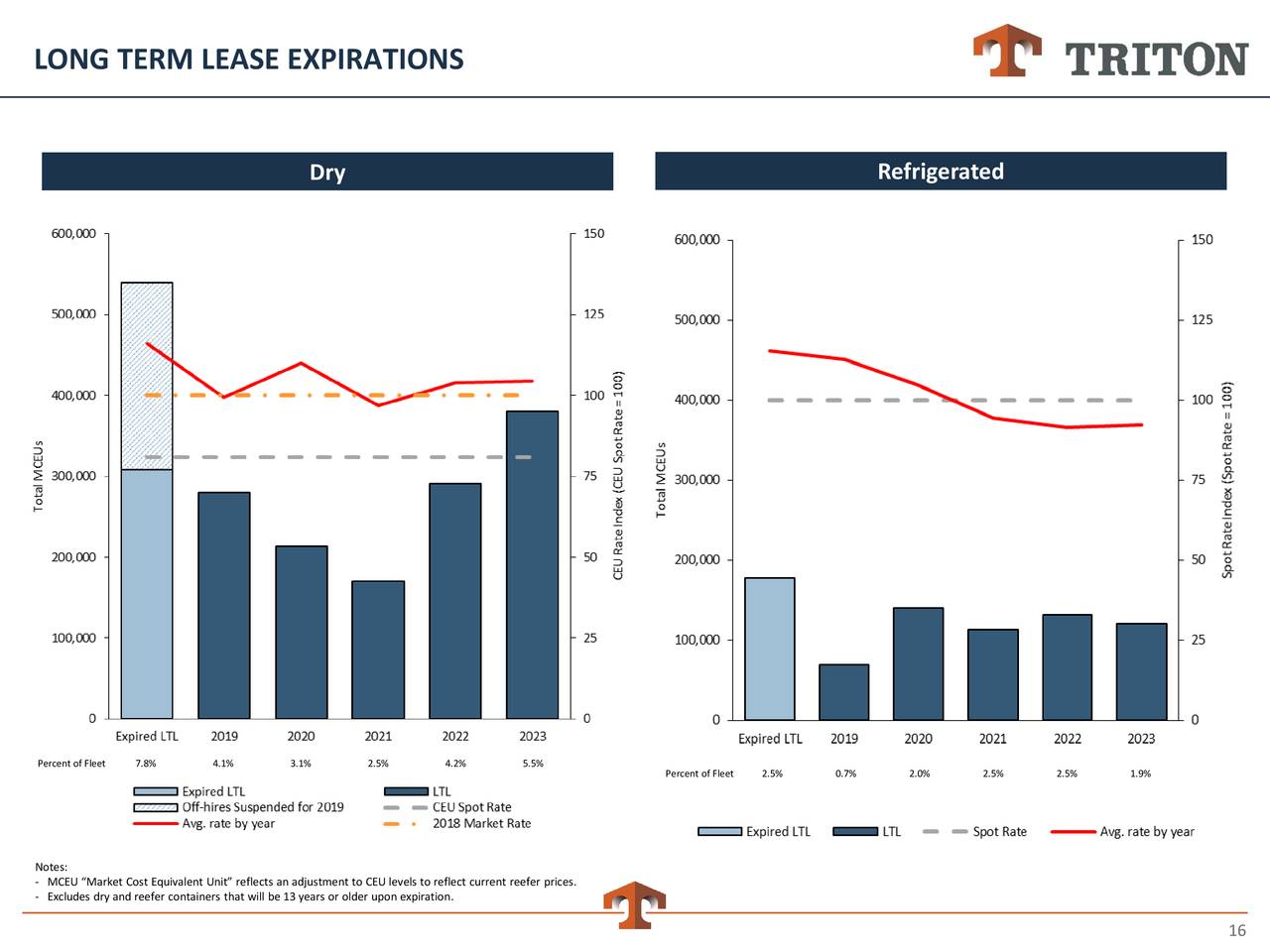 A rather unusual feature of Triton's capital structure, in my opinion, is that the company recently issued preferred stock (NYSE:TRTN.PA), which pays out $2.125 in annual dividends, putting it at just over 8% yield at the moment. It cannot be converted to common shares and cannot be called for five years (on or after March 15, 2024) at a price of $25 (currently trading in a range around $26.50). The cash from issuing the preferred was used to buy back common shares. Helane Becker, from Cowen, asked company management on the Q1 2019 earnings call about the thought process behind this strategy (emphasis added):

Borrowing on the perpetual preferred worth 8.5%, which I think seems high and relative to what your balance sheet would normally support . . . it seems like an expensive way to [raise] capital?

Yes, so good question. So I'd say the first thing, we look at the perpetual preferred stock, it feels an awfully lot like equity to us... given the various features of the preferred and the fact that it doesn't have financial covenants that, we can suspend the dividend without any say acceleration of the principal... so, when we look at issuing preferred, we very much think of it as we're substituting for our [common]... we think that, maybe that value of that cash flow hasn't been reflected in our common share price we might expect... and so, let's look at our overall cost of capital, we think it's a better mix of capital, substituting preferred for a portion of our common effectively.

Right, right. And then you use part of those proceeds to buy back stock. So the way to think about that is what you're taking. I'm trying to reconcile that 8.5% dividend with -

So, we think of it really as a - mostly as a common stock. So, the two will probably will use some of the preferred issuance for de-leveraging as well but the 8.5% dividend, the preferred compares to right now a 6%, and change dividend yield on our common.

My interpretation of CEO Brian Sondey's responses is that management sees the cost on the preferred shares as being worth it to buy back common shares that leadership strongly feels remain undervalued based on the company's record of generating strong cash flows. Being able to do so without leveraging the company further with restrictive debt is key, with hopes that future preferred issues may be used in part for de-leveraging. The preferred shares have a group of investors for whom the attributes may be more appealing than the common shares, and they give Triton some flexibility that debt would not provide, so it could be a win-win.

While I don't envision a scenario in which the relatively new dividend on the common shares would be slashed or suspended, the preferred certainly offer some downside protection in the event that Triton's fortunes would start to resemble those of the shipping companies themselves. In my opinion, the primary risk with the preferreds is that Triton would call them at $25 at the earliest opportunity they have, but that is four-plus years away while being paid 8%.

The Business Outlook Is Good

Triton International has seen solid growth over the recent past (thus contributing to the strong share price performance), with revenue and EPS having grown nicely. 2018 revenue totalled $1.40 billion, an increase of $200 million over the prior year. Management is forecasting generally favorable conditions for the rest of this year; EPS for Q1 2019 reported at $1.17, and while Q2 may see a slightly lower figure reported, the second quarter is expected to be the lowest EPS for the year. With $0.52 in common dividends per share each quarter, even if EPS falls rather dramatically to $1.00, the dividend payout ratio is well within a range most would consider sustainable, and the cash flow has been there to prove it.

The ongoing trade dispute between the United States and China, along with general concern that there may be softness in a whole host of global economic indicators, certainly has some concerned that global trade (and thus container shipping) could be severely affected. However, a relatively minor amount of Triton's containers are dedicated to China-US routes, and other than a complete global recession, containers should continue moving back and forth across our oceans at a solid clip.

Triton admittedly does have a large amount of debt, around $7.43 billion. Over half of the debt, $4.5 billion, was at fixed rates averaging 4.26%, while the $2.8 balance at floating rates was almost identical at 4.22%. However, bear in mind that it has corresponding leasing assets carried on the balance sheet at over $8.8 billion, and a utilization rate of 97.6% reported for Q1.

In other words, the vast majority of its leasing assets are being put to work, those leases stretch out for several years, and at least for the moment, there is a good market for selling used containers that don't go back into service. So far this year, the company has ordered $150 million in new containers for delivery in 2019 - certainly not an excessive amount of new capacity - and will be partially offset by selling used units; the approach strikes me as appropriately cautious.

Given all the factors, I do not believe there is reason that the debt should be overly concerning. In the unlikely event that the debt becomes unmanageable, the board could certainly cut the common dividend to service that debt, it could attempt to sell off additional assets that were not utilized, or it could even seek to issue more equity (as the CEO mentioned, some portion of future issues of preferred shares might be used for deleveraging).

Triton International as a company has some features I really like that should help buffer it from the worst possible effects of at least any short-term downturn in global shipping. With the available option of the preferred shares, even though likely limiting a major upside beyond the security of dividend, the additional security against downside risk while getting paid 8% for at least the next 4.5 years is an attractive possibility. The common shares also seem perfectly well-supported, with plenty of cash flow being generated and a strong foundation in fairly predictable revenue streams.

I am not a holder yet, but both the common and preferred shares will be on my watchlist for the foreseeable future for either income, growth, or both.

Larry Saunders
946 Followers
My professional background is in church work, but I left that vocation in 2012. In 2015, I earned an MBA from the Aix-Marseille University, located in in Aix-en-Provence in southern France. I currently live in the midwest with my spouse, children, and a cat who seems to like me more than she likes anyone else in our house.
Follow

Disclosure: I/we have no positions in any stocks mentioned, but may initiate a long position in TRTN, TRTN.PA over the next 72 hours. I wrote this article myself, and it expresses my own opinions. I am not receiving compensation for it (other than from Seeking Alpha). I have no business relationship with any company whose stock is mentioned in this article.