Wednesday June 5: Five things the markets are talking about

Global stocks have surged overnight, rebounding sharply from their recent declines after Fed Chair Powell hinted that the central bank could lower interest rates if the economy slows in response to escalating tariffs and economic uncertainty. US Treasuries have again advanced, while the 'big dollar is trading steady after four session of declines.

In commodities, oil is under renewed pressure along with MXN after Twitter Trump tweeted that the US is not bluffing on its tariff proposal that is due to take effect next week. However, Mexico's president has indicated that he hopes to reach a deal before the deadline.

Elsewhere, the World Bank lowered its outlook for global growth, noting that "international trade and investment flows dropped faster than expected in the first six-months of the year, curtailing economic activity."

1. Stocks get the thumbs up

Down-under, Aussie shares finished higher overnight, in line with the rally in global stocks after 'dovish' Fed comments. Australia's S&P/ASX 200 index rose +0.4%, in its second session of gains. Stocks also rose on Tuesday after the Reserve Bank of Australia (RBA) lowered its cash rate to a record low (+1.25%) to revive the country's slowing economy. In S. Korea, the Kospi added +0.1%.

In China, the main indexes ended close to flat overnight as Beijing's plans to conduct accounting checks pushed healthcare firms lower. At the close, the Shanghai Composite index was down -0.03%, while the blue-chip CSI300 index was down -0.04%.

In contrast, Hong Kong Shares ended higher overnight as comments from the US Fed raised investor hopes for an interest rate cut this year. At the close of trade, the Hang Seng index was up +0.5%, while the Hang Seng China Enterprises index rose +0.04%. 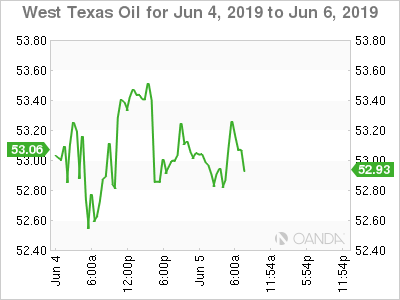 2. Oil prices fall on US stocks rise and Russia comments

Oil prices remain under pressure, dragged down by an unexpected gain in US inventories and comments from the head of Russian state oil producer Rosneft questioning the point of a deal with OPEC to withhold supplies.

Oil prices have been under pressure from investor fears about slowing global demand. However, yesterday's rally was helped by a global stock market rally on hopes of a cut in US interest rates.

Nevertheless, providing new pressure is US crude stock numbers which rose unexpectedly last week. According to API data released yesterday, crude inventories rose by +3.5M barrels in the week to May 31 to +478M, compared with expectations for a decrease of -849K barrels.

Expect investors to take direction from today's official numbers from the US Energy Information Administration (EIA) - the report is released at 10:30 am ET.

OPEC+ continues to give assurances that they would continue to manage global crude supplies to avoid a surplus.

Note: OPEC+ will decide later this month or in early July whether to continue the supply curbs.

However, underlining concerns about oversupply, the head of Russia oil giant Rosneft said Russia "should pump at will" and he would "seek compensation from the government if cuts were extended."

Ahead of the US open, gold prices have rallied to a three-month high after the latest comments from Fed officials lifted expectations of a cut in interest rate, pushing the dollar to a multi-week low. Spot gold jumped +0.7% to +$1,333.90 per ounce, while US gold futures have climbed +0.8% to +$1,339.60 an ounce. 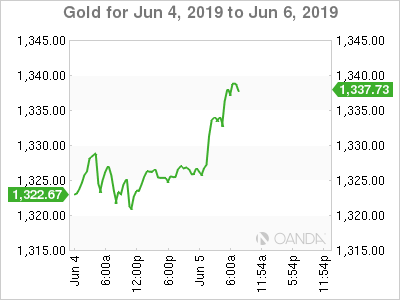 Four weeks ago, market consensus believed the Fed would hold rates steady for the rest of this year. However, that was before President Trump decided to take a hard-line stance on his trade policies with both China and Mexico. Ten-days ago, US fixed income dealers were pricing in one-rate cut in 2019. But now, in the past seven-days, money market dealers pricing of rate cuts has got a tad more aggressive, futures prices are now implying two-to-three -25 bps rate cuts by the end of this year. 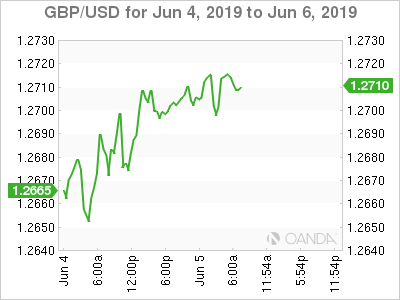 The 'big' dollar continues to struggle, trading atop of its two-month lows on rising expectations of a US Fed interest rate cut in response to trade conflict-related risks. With the Fed possibly rethinking their current strategy, has investors gravitating towards safe-haven assets like the EUR (€1.1284) and the Japanese yen (¥108.24).

The pound (£1.2729) has rallied to a nine-day high after the UK services purchasing managers' survey rose to 51.0 in May, up from 50.4 in April, and above market expectations of 50.5. There was a "greater intakes of new work and a slight improvement in underlying business conditions since the start of spring," said IHS Markit. However, "there were again widespread reports that Brexit uncertainty had held back client demand and remained a headwind to growth."

The EUR continues to hold its ground outright despite the focus for the 'single' unit continues to be the Italian government and their tensions with the EU. According to techies, the next levels to the upside will be in the €1.1320 area, a level set as the high in May. However, market focus remains on tomorrow's ECB's meeting, but many believe the event to be likely to be more an important driver for Italian government bonds (BTP's) than the EUR. 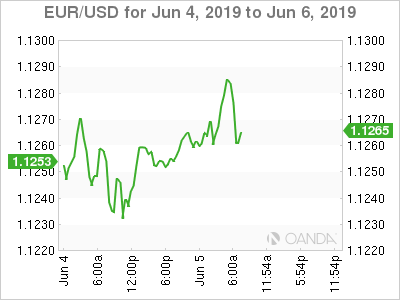 Data this morning from Europe for the month of May saw the continued expansion of the euro area private sector.

After accounting for seasonal factors, the IHS Markit Eurozone PMI Composite Output Index rose to 51.8 in May, up from April's 51.5 and slightly better than the earlier flash reading (51.6).

Note: The latest reading was the highest for three-months and extends the current period of continuous growth to just under six-years.

Digging deeper, it was the service sector that provided the impetus to overall growth during May, expanding at a solid pace. In contrast, manufacturing output fell for a fourth successive month.

Germany saw growth improve to a three-month high and, despite recording its weakest expansion for five-and-a-half years, Spain continued to expand solidly. In France, output increased modestly, but Italy remained just inside contraction territory for a second successive month.

Note: With activity increasing solidly, firms were subsequently able to reduce their overall backlogs of work for a third consecutive month. 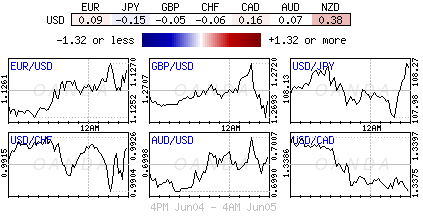