Recently I discovered Loral Space & Communications (LORL). They own a large share of the private satellite company Telesat which stands to receive a windfall alongside Intelsat (I). For people new to the topic, Intelsat share price rose almost 10x last year in anticipation of this windfall. Yet after hundreds of hours following this debate I haven’t seen Loral mentioned once, probably because of the complicated ownership structure. Put simply, most investors just don’t realize another way to capture this potential windfall. 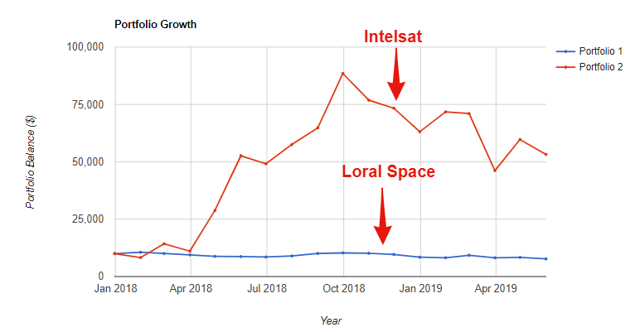 The four satellite operators involved are Intelsat, SES SA (OTCPK:SGBAF), Eutelsat (OTCPK:EUTLF) and Loral Space / Telesat. They currently access 500 MHz of C-band spectrum to transmit satellite data to American customers. However, the economic value of this spectrum is much higher when used for terrestrial 5g. Because of this, at least part of the spectrum must be cleared. 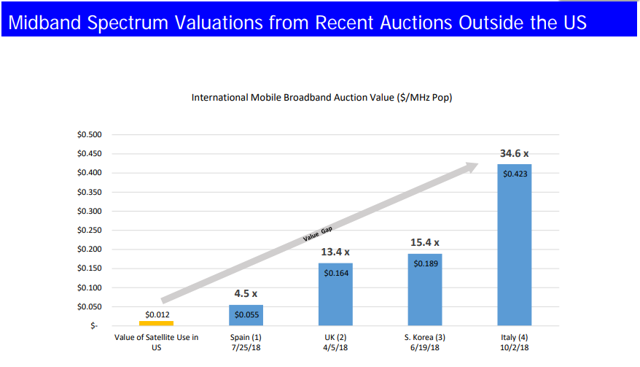 These satellite companies formed a lobbying group called the C-band alliance (CBA) to negotiate the terms for the transition. Their proposal releases 200 MHz for 5g. Intelsat led the charge, realizing that monetization of this spectrum is the only way out of their dire financial situation. Accordingly, they talk up a potential windfall far more than the rest of the CBA. This probably played a role in Intelsat share price ballooning up earlier and more dramatically than other CBA companies.

The C-band has a wide range of possible values. One detailed report came up with a value of ~$25b. They assume US telcos pay Italian prices - the high end - and free up the 200 MHz that the CBA proposes. The highest figure I’ve seen suggested is $70b, though this assumes the entire 500 MHz. For the purpose of this analysis I’ll conservatively use $50b, double the ground station’s figure which uses solid logic. I am being generous to make a strong point.

There is debate over taxation of the windfall. Satellite companies never actually bought the spectrum and reaping most of the proceeds goes against precedent. For example, the FCC’s recent broadcast incentive auction rewarded incumbents but the US government stood to capture any extreme windfall. Intelsat bulls believe the government will only tax a portion but leave the big windfall to the satellite companies. For the sake of argument, I’ll just go with their assumption. That said, there is a big difference between how Intelsat and Loral management talks about this issue on conference calls. Loral management is far more cautious about taxation.

Start with a $50b spectrum value. A 25% tax leaves $37.5b. Ground station expenses and a small windfall reduce this by at least $2b. New satellites will have to be launched costing ~$3.5b. With a 2 year delay the discounted potential windfall is ~$26b. I’ll just ignore other players like small satellite operators that could reduce this further.

Loral Space & Communications is a holding company that owns 62% of Telesat. Besides $250m in cash the company has no other material assets. The market cap is currently $1b. Telesat has normalized net income of about $120m/year currency adjusted. Loral’s 62% share is $75m. Subtract Loral’s cash on hand and the company trades at ~10 times earnings. This seems fairly valued given that Inmarsat (OTCPK:IMASF) recently went private at a 30%+ higher valuation. It’s reasonable to suggest that a windfall should correspond to an equal increase in market cap.

Loral really flew under everyone’s radar during this debate. I’ve not seen the name mentioned once while following the C-band saga for hundreds of hours. I looked through major owners and they’ve mostly been holding for years. Compare that to Intelsat where funds are changing ownership like mad. I already pointed out the complete disconnect in share price. You’d think Loral wasn’t even a CBA member based on that. This all supports Loral not having a windfall built into its share price.

Intelsat needs $270m annual net income to trade at the same 10 times earnings based on the current market cap. This occurs if interest expense decreases a bit more than 50%. Intelsat has $14b debt so knocking off ~$7b accomplishes that. This includes lost revenue from Intelsat’s recently lost satellite but ignores the about $1b of continued losses before a windfall comes in. Intelsat is reasonably pricing in a $7b windfall. Any windfall beyond that increases the market cap dollar for dollar from here.

This chart outlines the satellites involved,

Digging in a little deeper, four of Intelsat’s satellites don’t have access to the C-band while three of SES SA’s don’t, either. It seems like Eutelsat and Telesat’s all have C-band access. So if the split is based on total number of satellites the refined breakdown is:

This probably assigns too much windfall to Intelsat. Study the maps of the satellites of both companies. The three belonging to Telesat focus exclusively on the USA and southern Canada. Meanwhile only ten c-band satellites focus primarily on the USA for intelsat. This matches the utilization chart above. If the split is by number of satellites or transponders then Intelsat’s share is much lower. On the other hand, if it is based on utilization the share is about 50% Intelsat and 7% Telesat. I’ll once again use this optimistic figure for Intelsat.

5. A range of outcomes

For Intelsat bears, a strategy of long 2 parts Loral and short 1 part Intelsat breaks even in the worst possible outcome. Whereas with a small windfall both sides of the bet win a lot.

For Intelsat bulls, a strategy of long 1 part Loral and long 1 part Intelsat wins 50% more in the large windfall outcome but loses only half when there is just a small windfall. This is both a value play and protects against downside risk. This is pretty counter intuitive but true because of Intelsat's massive debt. Specifically, a small windfall is a clear boost for Loral but doesn't pay off enough of Intelsat's debt for the company to become profitable, and so the equity's value is still questionable.

I was a bit confused why Loral's investment in Telesat appeared so small on the balance sheet. To make sure I wasn't missing anything I asked investor relations what was going on. Their answer,

The long/short nature of this bet reduces the risk of a large windfall. That said, these companies could continue to have a disconnected share price even after a decision is made. There is a lot of exuberance surrounding Intelsat. If they get a large windfall the price could jump a lot more than my price target, while Loral might not jump much at all. In this case it would be important to keep both positions open. I will also be updating in the comments as new information comes out.

There could be virtually no windfall, and the satellite businesses could decline more quickly than expected. This would cause Loral share price to decline. I believe Intelsat's drop would more than make up for this, but there is always some chance the market doesn't respond that way.

Another possibility is the market catches on, Loral goes up in price a lot and the long/short edge dries up. In this case taking profits earlier could make sense because the bet grows riskier the smaller the price gap.

I personally think the US government is basically never going to give away $15+ billion dollars to four foreign satellite companies. Also remember that I went with,

4. A favorable split for Intelsat.

The stars really have to align for the Intelsat bull case to play out. That said, this opportunity seems so good that I want to bet very large. Thus, I’ll opt for a 2:1 long/short LORL/I ratio to protect myself in case I’m wrong.

David Orr
1.83K Followers
I back investors that generate alpha over a significant sample size.  If interested send your track record including the # of positions over the sample, your correlation and/or beta to SP500, a short explanation of your strategy and process and very brief summary of your investing experience prior to track record start date.  Rough numbers are fine.  orr.davey@gmail.com
Follow

Disclosure: I am/we are long LORL. I wrote this article myself, and it expresses my own opinions. I am not receiving compensation for it (other than from Seeking Alpha). I have no business relationship with any company whose stock is mentioned in this article.