Captain Marvel and other characters from Disney's Marvel universe (image via Screen Rant).

Disney And The Hedged Portfolio Method

There's an interesting split between Seeking Alpha contributors' sentiment regarding Disney (NYSE:DIS) and that of Seeking Alpha Essential's new quant rating on the stock, as you can see below. 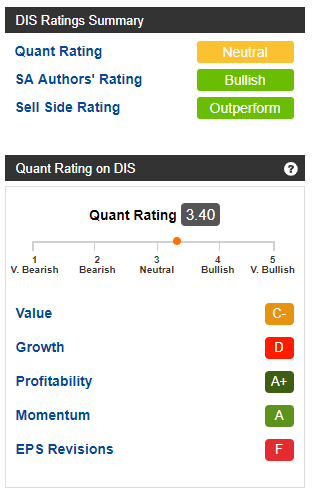 Given the disconnect here between the neutrality of the overall quant rating and the bullishness of Seeking Alpha contributors, I thought Disney would be a good candidate for a hedged or "bulletproof" portfolio. As we did in previous examples, we'll use the Hedged Portfolio Method to build a concentrated portfolio around DIS.

We'll start with these premises:

Here's a recap of the steps involved if you want to do this manually.

The goal of this step is to find names that have the potential to generate high total returns to include alongside DIS - whether those returns come partly from dividends or not isn't relevant (tax considerations aside). My site calculates its own potential returns by analyzing total returns and options market sentiment, but you can derive yours from Wall Street price targets or the price targets given by Seeking Alpha contributors you follow, if you like. Your initial universe can be as big as Portfolio Armor's (the ~4,500 stocks and Exchange-Traded Products with options traded on them in the U.S.) or something smaller, such as the Dow 30.

Since you're going to hedge, gross potential returns are less important to you than potential returns net of hedging costs. To figure those out, you need to figure out the optimal or least expensive way to hedge each name. We wrote about how to find optimal hedges here. For this example, you would be looking for the cost of hedging against declines of 20% or greater. The lower the decline you're looking to hedge against, the narrower the list of names you'll be able to use.

For each of the names in your initial universe that has a positive potential return, you'll want to subtract the hedging cost you calculated in Step 2 to get a net potential return.

Here, you simply buy and hedge a handful of names that had the highest potential returns net of hedging costs. The automated approach we'll show below includes a fine-tuning step to minimize your cash and to determine whether to hedge each position with puts or collars, but these four steps are the basics.

First, we enter "DIS" in the optional tickers field, along with the dollar amount we're looking to invest ($1,000,000) and the maximum decline we're willing to risk (20%). 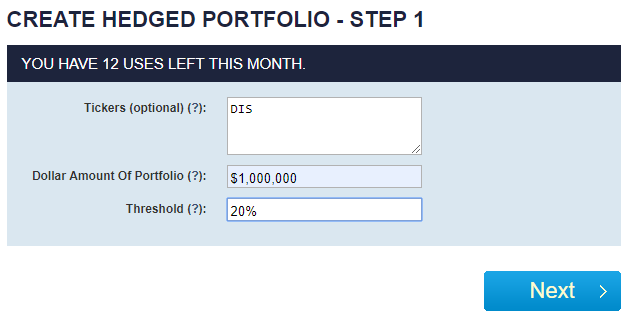 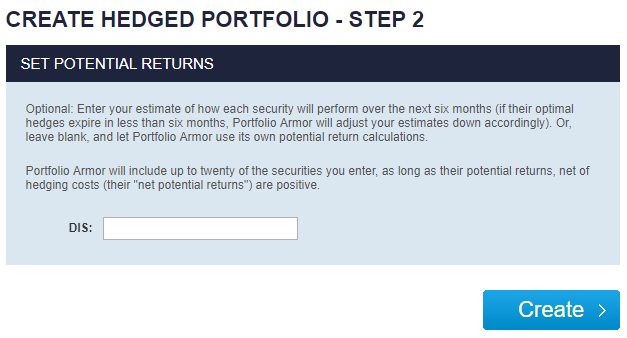 Next, I click "Create," and, after a few moments, I was presented with this hedged portfolio: 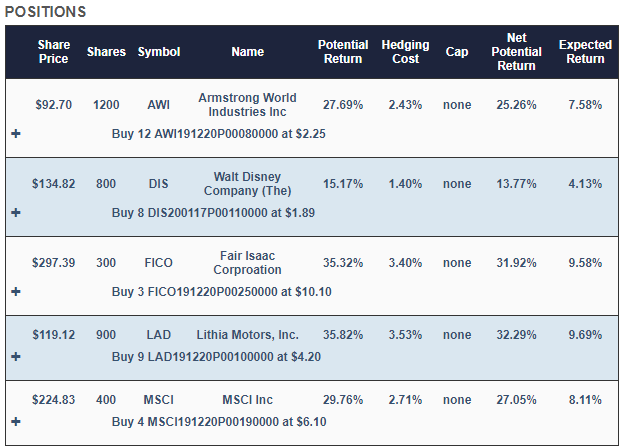 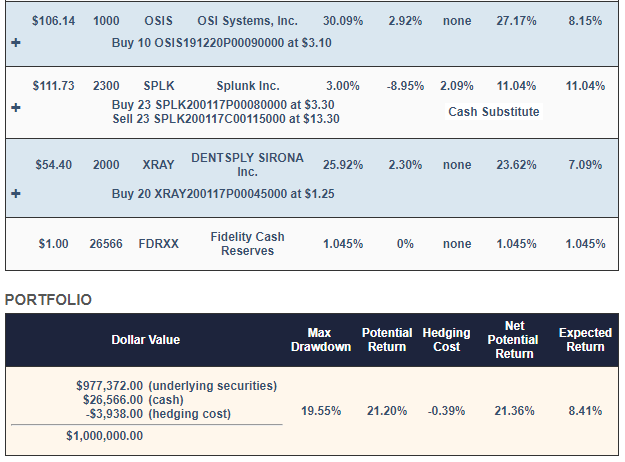 In addition to DIS, the site selected Armstrong World Industries (AWI), Fair Isaac (FICO), Lithia Motors (LAD), MSCI (MSCI), OSI Systems (OSIS), and Dentsply Sirona (XRAY) as primary securities, based on their net potential returns when hedged against >20% declines. The site attempted to allocate roughly equal dollar amounts to each of those names but rounded down the dollar amounts to make sure it had round lots of each stock.

In its fine-tuning step, it selected Splunk (SPLK) to absorb cash left over from the process of rounding down the primary securities. SPLK is hedged with an optimal, or least expensive, collar with a cap set at the current seven-day (annual) yield of the Fidelity Government Cash Reserves money market fund (FDRXX). The hedging cost of this is negative: The idea here is to get a shot at a higher return than cash while lowering the overall hedging cost of the portfolio and limiting your downside risk in accordance with your risk tolerance (to a drawdown of no more than 20%).

If you're curious why there are so few positions in this portfolio, the short answer is that hedging obviates the need for more and enables a winning position to have a larger impact on portfolio returns. For a longer answer, this article offers an elaboration and an example.

Note that each of the primary securities is hedged, in this case, with optimal puts. Here's a closer look at the DIS optimal puts:

As you can see, the cost of the Disney hedge (calculated conservatively, at the ask) was equal to 1.4% of position value, but as you'll see below, the overall hedging cost of this portfolio was negative.

Portfolio Armor's hedged portfolio construction tool tries hedging each primary security with both an optimal collar and optimal puts, estimating the net potential return both ways, taking into account the historical incidence of outliers. Essentially, the lower hedging cost of collars is weighed against the chance for higher upside when hedging with puts. In the case of DIS and the other primary securities, optimal puts won out.

Here's closer look at the data summary at the bottom of this portfolio:

The Max Drawdown is the worst-case scenario. That's what would happen if each of the underlying securities went to $0 before their hedges expired (the idea is to hold each position for six months or until just before its hedge expires, whichever comes first). In that case, you'd be down no more than 19.55%.

This is the aggregate cost of hedging the portfolio. Here, it is negative, meaning you would have collected a net credit of $3,938, or 0.39% of portfolio value when opening these positions (assuming, conservatively, that you bought all of the put options at the ask, and sold the call options on SPLK at the bid).

The best-case scenario is the net potential return of 21.36%. That's what you'd get, net of the hedging costs, if each security hit its potential return, which is unlikely.

Each time Portfolio Armor estimates a potential return for a security, it tracks how that security actually performed six months later, and it continually updates the ratio of actual returns to potential returns. The expected return of 8.41% takes that ratio into account, along with the hedging cost. The odds of hitting that number on the nose in a particular portfolio are slim, but, on average, the actual returns tend to track fairly close to expected returns.

Wrapping Up - How This Portfolio Differs

Each week in my Marketplace service, I present five portfolios to subscribers with dollar amounts ranging in size from $30,000 to $2,000,000, including one aggressive portfolio hedged against a greater-than-20% decline. This portfolio differs from ones in my Marketplace service mainly in that I let Portfolio Armor pick all the securities for the portfolios in my service, unlike here where I foisted DIS upon it. Let's check back in a few months and see how this portfolio is doing.

I chose Disney for the portfolio in this article, but Portfolio Armor selected the rest of the names here. I share Portfolio Armor's top ten names with my Bulletproof Investing subscribers each week. So far, they have outperformed SPY by 4.42% annualized, as you can see in the last table here.

David Pinsen
18.82K Followers
I developed the hedged portfolio method of investing at Portfolio Armor, and I run a Marketplace service at Seeking Alpha based on it called Bulletproof Investing.
Follow