Editor's note: Seeking Alpha is proud to welcome Dividend Athlete as a new contributor. It's easy to become a Seeking Alpha contributor and earn money for your best investment ideas. Active contributors also get free access to SA Essential. Click here to find out more »

Large Russian state-owned companies (SOEs) have historically not invested their funds very well for shareholder value creation. Instead, the money invested by the companies has served another purpose - to boost Russian GDP.

Now those companies are being told by the Russian Finance Ministry to target a 50% payout ratio for dividends, as the government wants to raise funds through their ownership in those companies. The change by the government means that they want to make sure those companies are being run as efficiently and profitably as possible, instead of boosting the whole country's employment and productivity. For the regular investor, that provides an opportunity to invest alongside the government in a market where near-monopolistic market conditions exist. Most of the SOEs have already complied with the 50% payout guideline, but the two companies I have my eye on - Sberbank (OTCPK:SBRCY) and Gazprom (OTCPK:OGZPY) - have increased their payout ratios. However, they still need further increases to match the benchmark that has been set by the Russian Finance Ministry. In Sberbank's case, that can be expected by next year.

Although investing in Russian companies carries a lot more risk than investing in more familiar markets, I believe the risk/reward ratio for income investors is favorable in these two state-owned companies.

Gazprom owns the largest natural gas reserves in the world and is the leading natural gas producer. 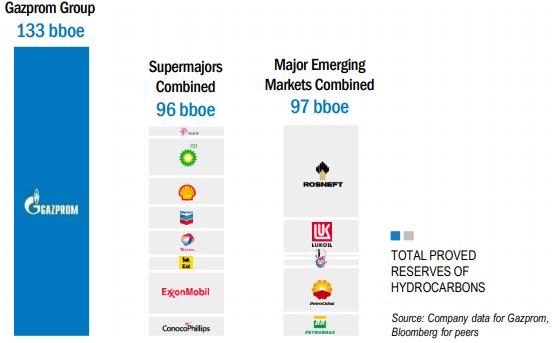 The company predicts that by 2035 natural gas demand is expected to increase by a third and overtake coal. That means the share of natural gas in the global fuel mix will amount to 25%.

Europe's own production from the North Sea, Germany, Holland, and Norway is expected to decline 50% by 2040, according to the International Energy Agency. That leaves even more room for Gazprom to increase its share of the market, as it's already the leader in that market space. Gazprom has over 35% market share in Europe.

Although there is competition lately from U.S. LNG, there are better markets out there for gas from the U.S., as seen by the LNG import prices on the chart below. 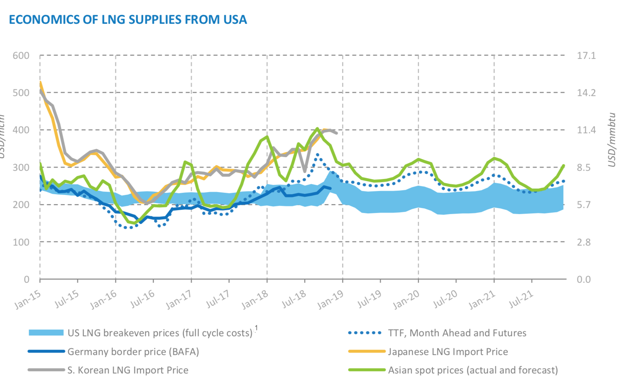 An additional two pipelines to Europe (NordStream2 and Turkstream) will increase export efficiency to Europe. NordStream construction has been affected by political pressure, but only in a "very, very insignificant way" according to Gazprom chief executive Alexei Miller.

Possibly the biggest growth vector for the company is the construction of the Power of Siberia pipeline, which will mark an entry into the Chinese market. What makes that so interesting is that 30% of the increase the company predicts in natural gas consumption globally will originate from China, as they want to reduce their dependence on coal. Gazprom expects to start delivering gas through the Power of Siberia pipeline as of Dec. 1 this year. 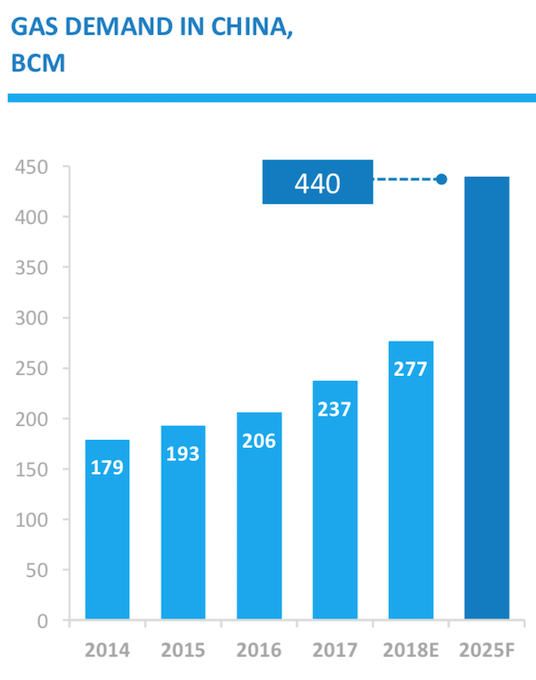 The balance sheet looks healthy as well. Long-term debt of around 36 billion is very safe compared to the yearly operating cash flow of 25-30 billion. The company is trading at an incredible 3.2 price-to-earnings ratio at the moment.

Gazprom has hiked its dividend from 8 roubles to 16.6 roubles, increasing the payout ratio from 17.5% to 27%, but still shy of the 50% the finance ministry is insisting on. After trading sideways for years, the news about the dividend was well received by investors, with Gazprom shares surging over 40% since the dividend increase was announced. At today's prices that comes out to a 6.8% dividend yield. The company also finished a big investment cycle and predicts capex moderation from 2020 onward, which should be a big boost to FCF.

With its favorable position in the European and Chinese markets, the completion of major pipelines in addition to the huge dividend increase and new dividend policies being implemented, Gazprom is a company that I recommend dividend investors look into.

Sberbank is Russia's biggest bank and one of the most profitable banking companies globally. 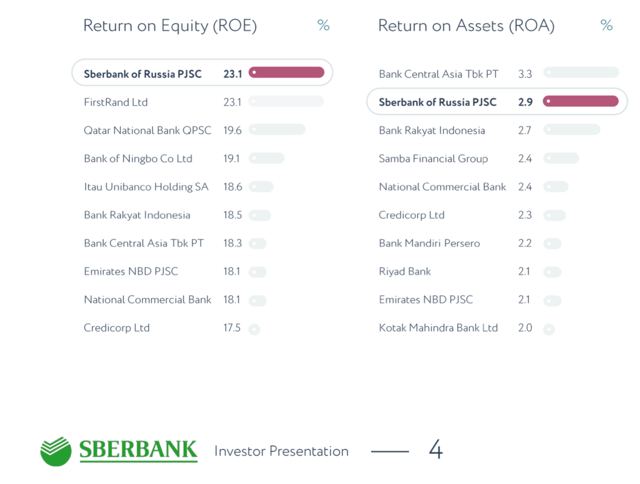 The CEO Herman Gref worked as a minister of economic development and trade earlier in his career and has close ties to the government; therefore, it was not a surprise that Sberbank agreed to the new payout system. It also gives Sberbank a very privileged position in the Russian banking system. It is involved in so many areas of the Russian economy that it is simply in the government's best interest to make sure it is running smoothly. For example, in 1998 during the Russian currency crisis, Sberbank was the only bank through which deposits were guaranteed.

The most impressive thing about Sberbank is its profitability - the company aims for a 20% ROE on average, which is one of the highest in the global banking industry. That is achievable due to the bank's almost monopoly-like position in Russia in combination with increasing efficiencies/growing profits. Although ROE in the last quarter slightly fell to 22.9%, it is still well above the 20% average mark the company is aiming for.

What is equally impressive is the digitalization effort by the company. The share of retail product sales digitally has increased from 14% in Q1 of 2017 to 30% in Q4 2018. They are aiming for a 45% share of digital sales for 2020, which is when the new technological platform ecosystem is expected to launch.

Net profit for the bank rose 6.8% year on year in the first quarter of 2019, showing Sberbank's continuous growth. Even with the company's growth rate, it's still trading at just a 6.1 price-to-earnings ratio.

Sberbank will pay out 361.4 billion roubles ($5.62 billion) in 2018 dividends, or 16 roubles per share, which amounts to 43.5% of the net profit. That is a substantial increase from 12 roubles per share from last year, and was achieved with a combination of earnings growth and increasing the payout ratio from 36.2% previously. For buyers today, that is a dividend of around 6.7%

If the earnings for the whole year grow in line with the first quarter of 2019, we can expect around 888 billion roubles. The 50% payout ratio would equate to a dividend per share of 19.7 roubles. At today's stock price, that would come out to just under 8.5% yield-on-cost for your dividends in 2020. The company's net income target for the fiscal year 2020 is 100 billion roubles, so the dividend has even more room to grow if financial targets are met. 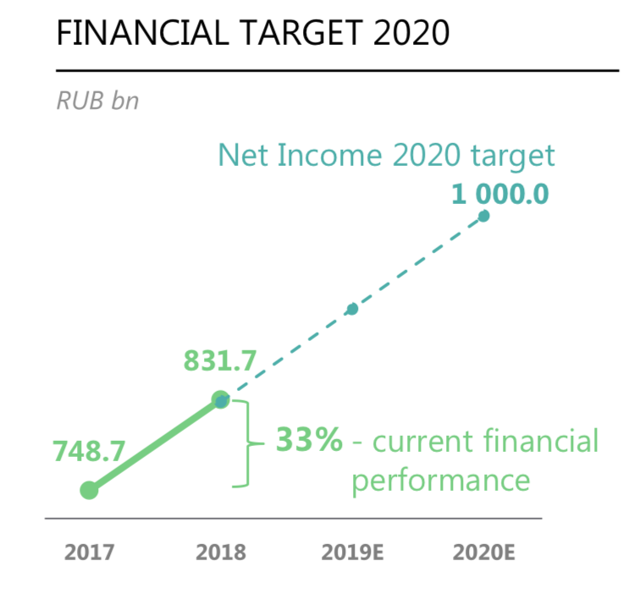 The impressive growth targets and excellent profitability alone make Sberbank a potential investment on which to do further research. The willingness by management to increase the dividend in accordance with the Finance Ministry's demands provides another strong driver for dividend growth.

The Russian stock market can be very volatile, mainly due to geopolitical reasons. For example, in 2014 during the Crimea crisis Russian indexes plummeted 11% overnight. Drops of this magnitude cannot be ruled out in the future.

For me, the currency risk is the biggest concern. The rouble is heavily affected by oil prices and sanctions, so if you're investing through DRs your dividend payments might vary greatly - even if the dividends are going up in rouble terms.

The two companies discussed in this article have proven to be resilient to the sanctions. Although volatility can be expected, I am confident in their ability to pay out increasing dividends.

Gazprom is the biggest holding in my portfolio currently, and my yield-on-cost is around 11.5%. With the huge dividend increase this year, dividends from Gazprom will make up about 20%-25% of my dividend income. That is well above my 10% portfolio income limit for any individual stock; therefore, I will not be adding in the near future. But as my portfolio is still in the accumulation phase, I will not be selling either - rather, just directing new money into other stocks. Sberbank has been on my radar for quite a while and as I am optimistic about the company's growth targets and dividend potential, I'm looking to initiate a position before the ex-dividend date on June 13. As a Europe-based investor, I prefer depositary receipts traded on the Frankfurt Stock Exchange for my Russian investments. You can check additional Depositary Receipt fees here.

Dividend Athlete
2.8K Followers
I am a professional athlete in my 20's, investing to create a passive income source for me and my family to live off once I retire from playing sports. I look for dividend growth opportunities globally. Articles are my opinions and do not constitute investment recommendations or advice.If you want to see my full portfolio, you can check it out at https://DividendAthlete.com

Disclosure: I am/we are long OGZPY. I wrote this article myself, and it expresses my own opinions. I am not receiving compensation for it. I have no business relationship with any company whose stock is mentioned in this article.