The Dow rallied over 500 points on Tuesday (6/4) and has continued that rally as of Wednesday morning. This comes after Federal Reserve Chairman Jerome Powell announced the Fed would "act as appropriate to sustain the expansion," indicating the possibility of a rate cut, CNBC reports. Rate cuts in securities like Treasurys make stocks more attractive to investors. However, a rate cut also indicates signs of diminishing confidence in the economy.

Stock prices have been rallying with a few bumps throughout the past year. May was a tough month for equities, during which time bond prices rallied and yields fell significantly. The 10-year Treasury note and three-month bill yield curve has inverted, a widely known recession indicator. At the same time, investors are sending indexes up and "buying the dip."

While some may take Powell's comments as a bullish view on stocks, the lower yields reflect pessimism among bond investors, reports The Wall Street Journal. Of investors surveyed by the American Association of Individual Investors Sentiment Survey, 40% mentioned a bearish reading since early January, while only 25% expected an advance in prices since then, says the Journal. A major reason for differing opinions is how investors view the trade tensions and how they will affect earnings. Many money managers are taking defensive positions and urging clients to follow suit.

"Trade aside, investors say the outlook for global growth on its own doesn't do much to bolster the case for stocks," the Journal reports. In addition, manufacturing activity has been stagnant in the eurozone for months and has been slowing for Chinese and U.S. factories as well, says the Journal. These are well-known economic indicators. Another report that is considered a coincident indicator of the economy is the nonfarm payrolls. For the month of May, only 27,000 positions were added, as opposed to estimates of 173,000, according to ADP and Moody's Analytics.

The slowdown in manufacturing sales and nonfarm payrolls indicates a slowdown in the global economy. While some may see a rate cut as a bullish view for stocks, others see this as a short-term play only and are starting to allocate their portfolios defensively.

Factors: Among the Factor Benchmark ETFs, the average factor score decreased from -3.58 to -7.75. Momentum decreased for all 12 factors last week. Sustainability had the largest drop in momentum score, decreasing 8 points. Low Volatility and Momentum continued to occupy the top two positions, while High Beta remained the laggard. 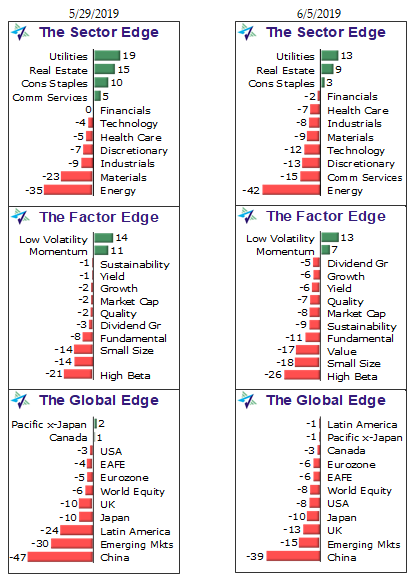 Invest With An Edge
656 Followers
Invest With An Edge (http://investwithanedge.com) is a free trading resource for everyday investors. Published by All Star Investor (http://www.allstarinvestor.com/), we’ve been delivering solid investing advice since 1991. We specialize in Exchange Traded Funds (ETFs), Mutual Funds, and Stock investing. This website includes: --Daily Market Commentary (http://investwithanedge.com/commentary) We cover the markets from a unique perspective. Our daily insight will help you to think about investing in a not-so-common way and will help you gain an edge in the markets. --Leadership Strategy Trading Method (http://investwithanedge.com/leadership-strategy) This growth strategy takes all investing styles (Large Cap Growth, Small Cap Value, etc.) and helps you to invest in the ones displaying true market leadership. --Weekly Investing Newsletter (http://investwithanedge.com/invest-with-an-edge-newsletter) We provide a powerful mid-week review of the markets with a focus on sectors, styles, and international positions. We also include a timely Pick of the Week for investors looking for more ideas.
Follow