vTv Therapeutics (NASDAQ: VTVT) is a clinical-stage biopharmaceutical company engaged in the discovery and development of orally-administered small molecule drug candidates. The firm has a pipeline of 7 clinical drug candidates, all in Phase 1 and 2. Azeliragon (TTP488), an orally administered, small molecule antagonist targeting the receptor for advanced glycation endproducts ("RAGE"), is the firm's lead asset. TTP399 is the firm's Type 2 Diabetes candidate, an orally administered, liver-selective glucokinase activator ("GKA"), which successfully completed a Phase 2b clinical trial in Type 2 diabetes (the "AGATA Study"). TTP273 is an another Type 2 diabetes asset that targets the glucagon-like peptide-1 receptor (GLP-1r), which successfully completed a Phase 2 clinical trial in type 2 diabetes (the "LOGRA Study"). The firm is currently investigating TTP399 as a treatment for type 1 diabetes in an adaptive Phase 2 study in partnership with JDRF International.

vTv Therapeutics has not had the best success most recently with its Alzheimer's Disease Trials. However, recent data has shown that the firm's lead asset, Azeliragon, has made some headway in the Diabetes and Alzheimer's spaces. Coupled with the firm's other drugs in the pipeline, this leads me to believe a share price of $1.67 does not seem to be justified. Thus, I recommend a buy for vTv therapeutics, given an investor can swallow the risk and volatility.

Alzheimer's Disease is characterized by the build of beta-amyloid plaques in the brain. There are approximately 5.8 million individuals in the United States living with AD, and this number is projected to triple by 2050. There has been numerous clinical trial failures in the space, most recently with Biogen's Aducanumab based on the amyloid hypothesis. Consequently, the Alzheimer's Market is tainted with risk, especially with the lack of clarity regarding the science behind the disease.

Type 1 Diabetes, once known as juvenile diabetes or insulin-dependent diabetes, is a chronic condition in which patients' pancreas produces little or no insulin. Insulin is a hormone needed to allow glucose to enter cells to produce energy, and approximately 1.25 million people in the United States suffer from Type 1 Diabetes. Type 1 diabetes accounts for only 5-10% of all cases diabetes in the US, Canada, and Europe.

There are currently no FDA approved oral drugs for Type 1 Diabetes on the market.

vTv Therapeutics focuses on the intersection between Dementia and Diabetes, with an approximate patient population of 18 million as reported in vTv's investor presentation. 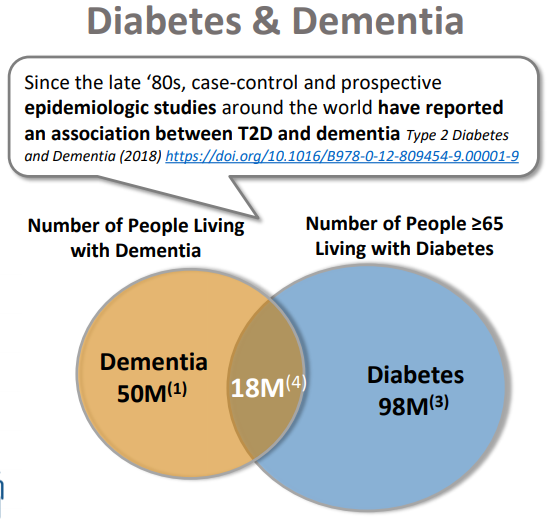 vTv Therapeutics is moving forward with its clinical programs evaluating Azeliragon for the treatment mild-Alzheimer's disease (AD) in patients with type 2 diabetes (T2D). Azeliragon is using a "new approach" to treat AD, specifically inhibiting the Receptor for Advanced Glycation Endproducts (RAGE). The firm has initiated startup activities for sequential Phase 2 and Phase 3 studies conducted under a single clinical protocol. The Phase2 program will be comprised of 100 subjects with mild-AD and T2D, evaluating six months of treatment with azeliragon on cognitive performance as measured from baseline ADAS-COGS scoring. The firm expects to begin screening subjects for the azeliragon's Phase 2 trial in June. There is also a planned Phase 3 program with targeted enrollment of 200 patients with mild-AD and T2D, evaluating efficacy using the standard ADAS-COG and CDR-SB scoring.

Azeliragon is certainly a high-risk lead asset, especially with the amount of R&D expenses associated with it. The firm has been using the majority of its capital to fund trials, hoping for a breakthrough while no one else has.

TTP399, an oral small molecule glucokinase activator (GKA), is currently undergoing trials as an addition to insulin therapy for patients with Type 1 Diabetes (T1D). The Simplici-T1 trial seeks to evaluate the safety and efficacy of TTP399, seeking to replace or reduce mealtime insulin bolus and while improving A1c levels in patients with T1D. vTv has also initiated screening for the part 2 confirmatory study and anticipates data in the first quarter of 2020. In the completed Phase2 AGATA involving subjects with T2D, subjects receiving the TTP399 800mg dosing for six months achieved significant A1c reductions from baseline levels vs. placebo. Those in the 800mg treatment cohort also experienced weight loss and improvements in HDL levels. Throughout all trials, TTP399 was safe and well-tolerated.

vTv ended the first quarter of 2019 with an available cash balance of $5.0 million. Further, they signed an agreement with MacAndrews & Forbes, which the firm can sell up to 5.45 million shares of Class A common stock equating to proceeds of up to $9 million. Consequently, vTv has a lot of capital resources that it can use to fund operations over the next year.

As an investor with a background in healthcare and neuroscience, I always stay away from firms exclusively in the Alzheimer's space. The recent failures based off of the Amyloid Hypothesis has led me to become skeptical on the science of beta-amyloid plaques, but this means any science outside of the standard clinical trials may be plausible. Regarding vTv Therapeutics, the likelihood of Azeliragon being a blockbuster breakthrough for AD is near 0%, similar to any other firm in the AD space. However, the firm also has a strong pipeline for Type 1 and 2 Diabetes, a market that's full of players and successes. Furthermore, they've managed to find a niche within that market, leading me to believe that the current valuation is quite low at under $2.00. Thus, with all biotech companies, it's best to invest early, and I believe that vTv Therapeutics should receive higher valuations as more data comes out from its Phase 1 and 2 Trials. I acknowledge this is an extremely high risk investment, so an investor must be able to accept to risk and volatility with the chance at a large upside.

Disclosure: I/we have no positions in any stocks mentioned, but may initiate a long position in VTVT over the next 72 hours. I wrote this article myself, and it expresses my own opinions. I am not receiving compensation for it (other than from Seeking Alpha). I have no business relationship with any company whose stock is mentioned in this article.