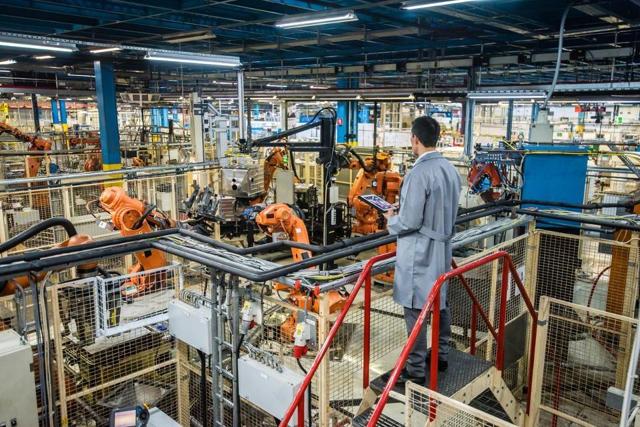 U.S. industrial production for the month of April fell 0.5 percent versus March:

US industrial output unexpectedly fell for the third time in the last four months, data released on Wednesday showed, as manufacturing softened and utilities output declined amid warmer weather. Industrial production, a gauge of output from factories, mines and utilities, declined 0.5 percent month-on-month in April, the Federal Reserve said. That compared with economists' forecasts for it to stay unchanged and followed an upwardly revised 0.2 percent increase in March (previously minus 0.1 percent).

Industrial production fell for the third time in the previous four months, as manufacturing continued to slow, and the energy sector was down due to warm weather. Manufacturing failed to record a gain for the fourth straight month. Weak manufacturing data seems to justify concerns that the economy is slowing.

Manufacturing is of particular interest to President Trump because the sector tends to create high-paying jobs. The president vowed to get manufacturing back on its feet. Early in his presidency, it appeared manufacturing jobs would return. The question remains, "How much of the manufacturing growth was stimulus induced?" Meanwhile, mining could face headwinds if the lingering trade war hurts prices for commodities.

Industrial Production Appears To Have Peaked

The above chart shows that since the Financial Crisis of 2008/2009 industrial production rose steadily. It came after trillions in stimulus that, in my opinion, was designed to spur business fixed investment. However, a weak consumer may not be able to afford the products and services produced by the industrial sector.

Sans more stimulus, the industrial sector could continue to decline. I am of the impression that spurring industrial production is not an easy task. The Federal Reserve has intimated a rate cut could be warranted if the trade war with China and Mexico intensifies. However, low interest rates have not been able to spur growth in core personal consumption expenditures ("PCE") above the Fed's 2 percent target for a sustainable period. I have my suspicions that another rate cut may not spur industrial production at this juncture.

What's Next For Financial Markets?

Financial markets bounced Friday on weak jobs data. The general consensus is that a slowdown in the economy could prompt the Fed to cut rates, which would be good for stocks. I believe sentiment could drive financial markets in the short term. However, over the long term, earnings fundamentals could come into play.

I am particularly bearish on cyclical names and companies with high debt loads. RV-related names like Patrick (PATK) and LCI Industries (LCII) have experienced revenue declines as RV shipments have fallen. If shipments continue to fall, then these stocks could come under pressure. General Electric's (GE) core revenue continues to fall, particularly for Power Systems, which makes large turbines for power generation. GE bulls imply its new CEO can rightsize the business and jump-start earnings. I counter that GE's industrial operations are cyclical in nature; therefore, the company's revenue and earnings should fall when the economy slows.

Schlumberger (SLB) has feasted off of rising drilling activity in the oil patch. It rang the alarm on North America in Q4 2018 due to reductions in fracking activity. SLB bulls believe it could be undervalued amid low oil prices. I counter that (1) future oil prices could be driven by the economy and not OPEC supply cuts and therefore (2) SLB has peaked.

Industrial names and highly-indebted names could trade down if industrial production remains dismal. This is likely a stock picker's market. Avoid cyclical names and stocks with high debt loads.

Disclosure: I am/we are short GE, LCII, PATK. I wrote this article myself, and it expresses my own opinions. I am not receiving compensation for it (other than from Seeking Alpha). I have no business relationship with any company whose stock is mentioned in this article.