Xiaomi (XIACF, XIACY), the world's largest consumer Internet-of-Things (IoT) platform and second-largest wearable company, is the company's largest customer and distributor. Thanks largely to Xiaomi's brand recognition, community and distribution channels, Huami shipped 18.1 million units of smart wearables in 2017 and has quickly become one of the largest biometric and activity databases in the global smart wearables industry.

According to the business cooperation agreement with Xiaomi, Huami and Xiaomi "share all profits, normally on a 50:50 basis, derived from sales of Xiaomi Wearable Products (including Mi Band series and Mi Smart Scale series)" and "jointly set the retail price of Xiaomi Wearable Products". When the company expands into markets outside China, it can leverage Xiaomi's brand recognition and distribution channels in those markets. As of the first quarter of 2019, Xiaomi ranked in the Top 5 in over 40 countries and regions in terms of shipments and has actively explored new markets, such as Africa and Latin America. 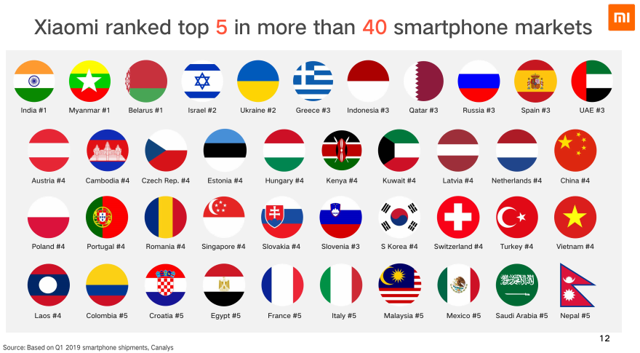 On April 25, Huami announced to sell shares (793,650 ADSs by itself and 7,142,850 ADSs by certain selling shareholders) at $9.75 per ADS in a follow-on public offering. Huami stock reacted negatively to the news as it might be a signal of deteriorating relationship with Xiaomi as selling shareholders include Shunwei, a venture capital fund related to Xiaomi's founder, Lei Jun.

We think the market has overreacted. It was mentioned in Huami's prospectus that Shunwei made its initial investment in Huami in 2014, so it should not be surprising that Shunwei would have to exit soon.

Furthermore, Huami's efforts to build its self-owned brand has begun to bear fruit. The company introduced its first own brand, Amazfit, in September 2015. Shipments of Huami's self-branded products have increased from approximately 1.0 million units in 2017 to approximately 3.1 million units in 2018. In first quarter of 2019, Huami shipped 0.8 million units of self-branded products, up 49.3% yoy. In terms of revenue, self-owned brand contributed 41.3% of Huami's revenues in the first quarter of 2019, up from 21.2% in 2017.

The mix decline should help relieving investor concerns about the revenue concentration risk and help improving margins of the company. With its self-owned brand, Huami doesn't have to share 50% profits of all products with Xiaomi, Huami will also have the liberty to set higher prices for its more high-end products. While we appreciate Xiaomi's efforts to enable everyone to access quality consumer technology products at reasonable prices, we think there is no harm to charge a bit higher price on higher-end products if the consumers simply don't mind to pay more to enjoy additional functionalities and value-added services.

Huami's revenue had been expanding over 40% yoy each quarter in the past eight quarters. To put things in context, the worldwide market for wearable devices is expected by IDC to grow 15.3% yoy to 198.5 million units by the end of 2019. According to IDC, smart watches represents 44.2% of the wearable market in 2018 and will expand to 47.1% in 2023; smart earbuds will represent 27.4% of the wearable market in 2019 and become the second largest category of wearables with 31% market share in 2023. 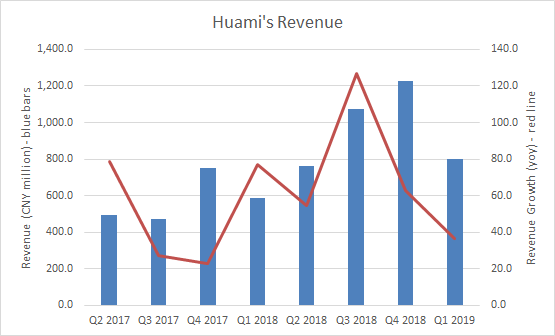 Huami's gross margin had been stable at around 25% in the past eight quarters. 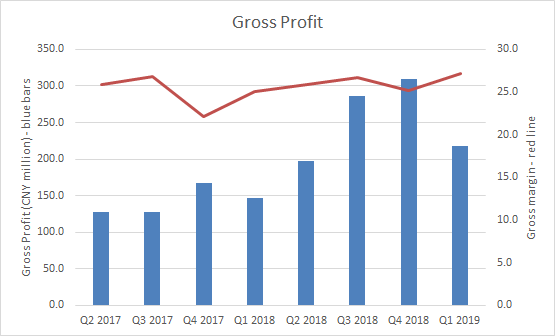 When Huami announced its unaudited financial results for the first quarter on June 3, the company mentioned that it would launch "multiple models of Amazfit watches covering different market demands and price ranges". For example, Amazfit Verge 2, which Huami will announce on June 11 according to Gadgets and Wearables, will be Huami’s first watch with eSIM support. The eSIM enable the smart watch to work totally independently from a smartphone. The watch will also be equipped with the latest Qualcomm wearable chipset.

A new generation of Xiaomi's fitness tracker, Mi Band 4, will also be launched on June 11, according to a Weibo tweet by Lei Jun. Mi Band 4 will come with a new colour OLED panel which will be bigger than the current model. The price of the new product has not been disclosed yet but given Xiaomi's track record in offering quality products at rival-beating prices, we believe Mi Band 4 will sell well and provide a strong boost to Huami's financials.

Furthermore, there were media reports that Huami will debut the world’s first electric toothbrush with a touchscreen.

Merton Bay Capital
87 Followers
Our investment philosophy was initially drawn to the deep value, fundamental driven style. While such style has translated into above market return, we rely increasingly on the growth-at-a-reasonable-price approach. This has been working particularly well after the GFC and is likely so with QE infinity.
Follow