Vanguard Communication Services ETF (NYSEARCA:VOX) owns a portfolio of U.S. communication services stocks. The ETF tracks the MSCI U.S. Investable Market Communication Services Index. With the implementation of the GICS sector classification in September 2018, the stock now also includes several high-profile growth stocks in the technology sector such as Google (GOOGL), Facebook (FB) and Netflix (NFLX). As such, the fund should now be seen as an ETF that offers growth and some dividend instead of a purely dividend ETF. Its inclusion of these growth stocks also means that its fund performance can be volatile as these stocks have higher concentration in VOX’s portfolio. We believe VOX is suitable for investors with a long-term horizon seeking capital appreciation and some dividend growth. 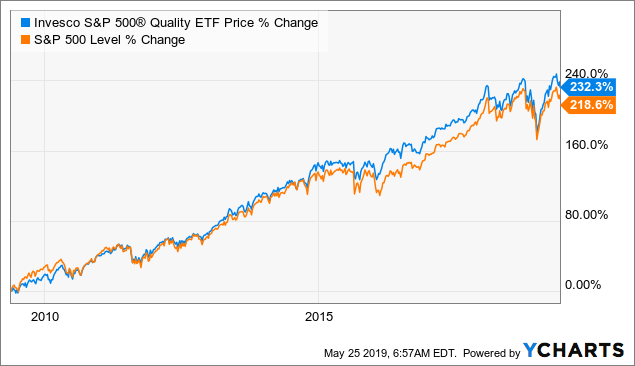 VOX does not only hold traditional telecommunications stocks such as AT&T (T), Verizon (VZ), or T-Mobile (TMUS). Instead, VOX also includes other services company that are usually categorized in the e-commerce or media sectors such as Facebook, Alphabet, Netflix, or The Walt Disney Co (DIS). These companies have better growth profile than traditional telecom companies. This inclusion was due to the GICS sector classification implemented in September 2018. This inclusion of several e-commerce stocks also means that there are more growth stocks in the portfolio. 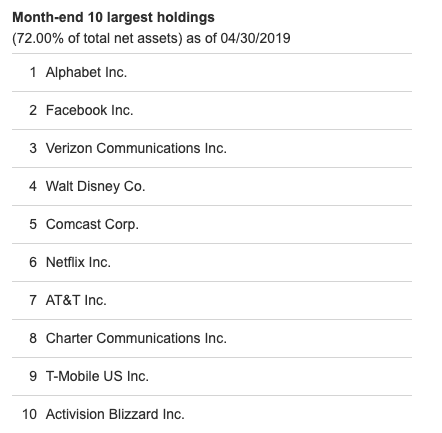 E-commerce companies such as Facebook, Alphabet, and Netflix has grown rapidly in the past few years. These are also stocks that are now included in VOX’s portfolio of stocks. As can be seen from the chart below, companies such as Electronic Arts (EA) and Facebook have grown EPS by more than 830% and 620% in the past 5-years. 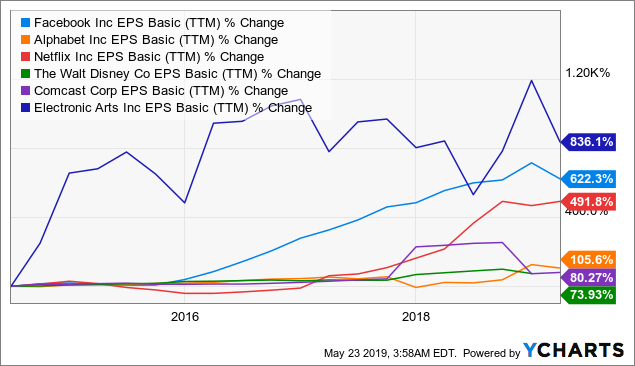 On the other hand, traditional telecom stocks such as AT&T (T) and Verizon (VZ) saw EPS decline by 21.4% and 17.8% in the past 5 years respectively. 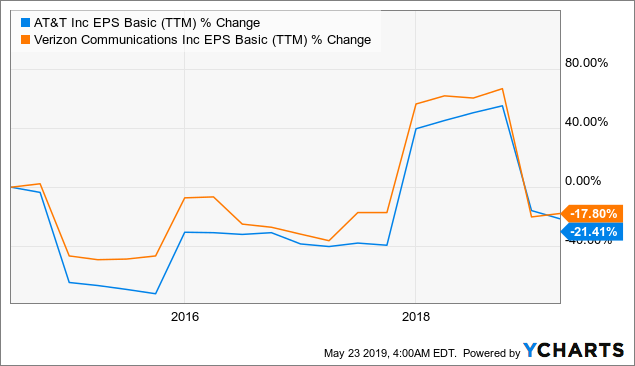 The inclusion of growth companies such as Facebook, Google, Netflix, and Electronic Arts in VOX means that investors should expect higher capital appreciation in this ETF.

Dividend yield not as attractive as before

Traditionally, telecom stocks have much higher dividend yields. However, the implementation of the GICS sector classification in September 2018 has resulted in a change in the portfolio mix of VOX. There are more growth stocks in the portfolio instead of only dividend stocks. As a result, VOX’s dividend yield is now less attractive. As can be seen from the chart, VOX’s dividend yield (trailing 12 month) has declined to 1.6%. This is much lower than the 4% yield in the first half of 2018. Income investors should keep in mind that VOX should not be considered as a dividend ETF anymore. Instead, VOX should be treated as an ETF that focuses on growth as well as some dividend growth. 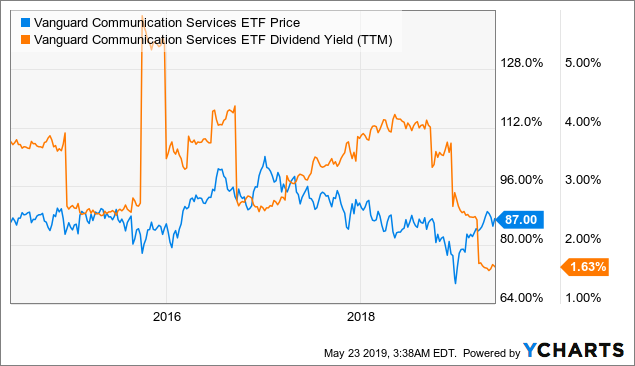 VOX’s top 5 holdings represents about 53% of its total portfolio. In fact, its top 10 holdings represent nearly 72% of its total portfolio. This high concentration in only a handful of stocks means that its fund price can be quite volatile. For example, in the second half of 2018, share price of Facebook (nearly 16% of the portfolio) has slid over 40% in a relatively short period of time. Therefore, its fund performance is now becoming more volatile with the inclusion of these e-commerce companies. 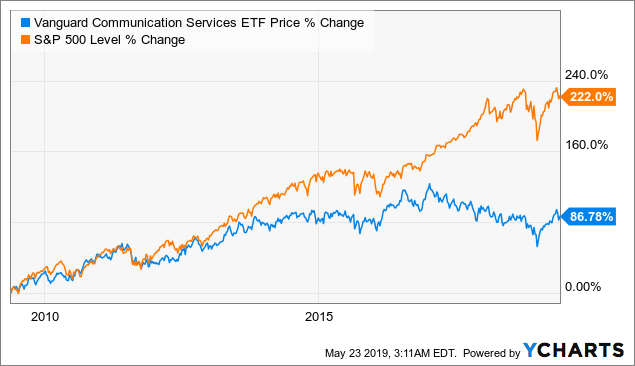 Instead, we should consider VOX’s performance year-to-date. As can be seen from the chart below, VOX’s fund price increased by nearly 17.5% YTD. This is much better than the S&P 500 Index’s 13.9%. However, investors should also keep in mind that VOX has higher volatility than the S&P 500 due to its higher concentration in fewer stocks. 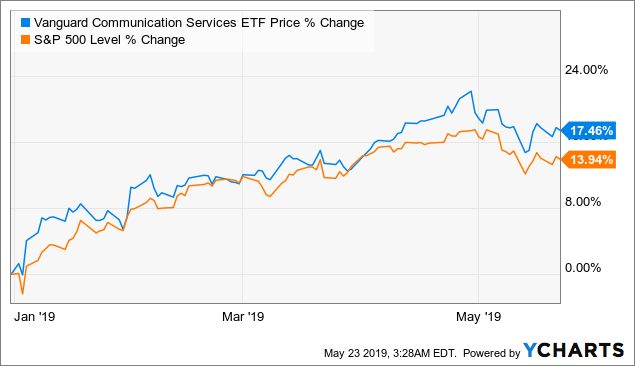 VOX charges a low management expense ratio of 0.10%. For example, its MER is lower than other ETFs, such as iShares U.S. Telecommunications ETF’s (IYZ) 0.43%.

However, we are now in the latter stage of the current economic cycle

The current economic cycle is well into its 10th year and the party is still on. The economy in the United States continues to run at a full capacity. In Q1 2019, U.S. GDP growth rate reaccelerated to 3.2%. In the same time, its unemployment dropped to 3.6%. This is the lowest we have seen since 1969. While nearly 100% of the stocks that SPHQ holds trade in the United States, investors should also keep in mind that most of these companies have sizable businesses internationally. Therefore, investors should also pay attention to global macroeconomic trends. The uncertainty surrounding the trade tensions between China and the United States may have the potential to derail the global economy. This will definitely affect the SPHQ’s fund performance.

We think VOX is a good ETF to gain exposure in the technology space as it now includes e-commerce stocks such as Netflix, Facebook and Google. However, investors should keep in mind that this ETF is no longer a dividend ETF that pays attractive dividends. Therefore, it is better suitable for investors seeking capital appreciation and some dividend growth. We like the growth profile of many stocks in VOX’s portfolio of stocks and believe it can be a good long-term holdings for investors with a long-term investment horizon. However, given that we are in the latter stage of the current economic cycle, investors may want to be careful and wait for any pullbacks before initiating a position.

Ploutos Investing
6.65K Followers
I am a value focused investor. Stocks rise and fall for many different reasons that we often cannot predict. Eventually, it is those companies with a wide moat and the ability to generate cash flow that prevail. Therefore, my investment focus is to find value stocks that are able to generate cash flow, with sustainable dividends and provide growth over time. I focus my attention on analyzing large-capped dividend growth stocks, REITs and ETFs. I aim at providing a quarterly update and insights on stocks I follow. Please feel free to browse the articles that I wrote and provide any comments.
Follow