In a previous article, I had written about gold’s cheap price in currencies around the world. That is not to say that gold has not done well recently in different world currencies, just that it has underperformed relative to the massive printing conducted in currencies across the world. 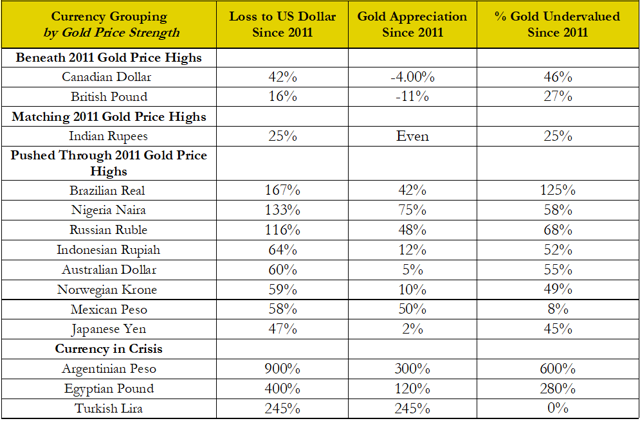 While accurate, my report didn’t show how strongly the metal has performed as of late. It is true that gold has done well, which should be recognized. However, the gold price still has plenty of catching up to do around the world when considering the blatant debasement the central banks have done to their fiat paper currencies in the interest of avoiding inevitable economic recessions.

Around the same time I published my gold versus currency piece, Incrementum’s recently published report "In Gold We Trust" (free registration required) called out the outstanding performance of gold versus popular currencies since 2001. 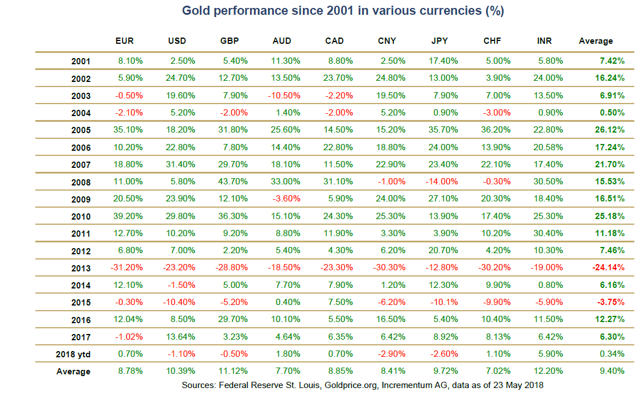 As we can see in the table, gold has appreciated in popular world currencies by an annual average of 9.4% since 2001. Put in a different perspective, it is at least partially tracking the inflation of popular currencies during that time frame.

Gold price just hasn’t tracked all of the fiat currency that central banks have dumped into the markets. This gives gold investors reason to be bullish on the future price of gold eventually catching up with the debasement of paper money, as it has traditionally done over time.

Thankfully, Incrementum’s latest gold report provides us a handy chart for tracking US dollar cycles since 1973, shortly after the US exited the gold standard. 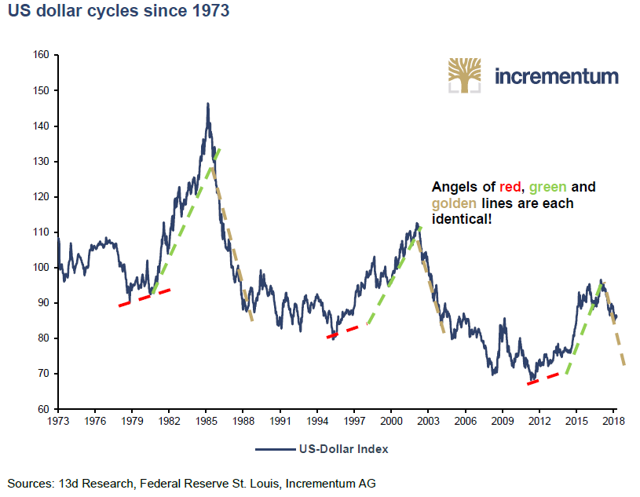 The current dollar index value action is following past downward cycles. If the trend holds true, we can expect a devaluation of the dollar against other world currencies, which would continue to be bullish for gold. Gold is still quoted and traded in many markets in dollar terms.

Both precious metals have soundly beaten the popular stock indices since the dot-com bubble. Gold price has beaten stock market returns several times over. However, this isn’t a complete picture, as many stock investors are dividend investors and reinvest those dividends over time to increase their returns. To calculate total returns including dividends, we use the Wilshire Large-Cap index. Note, the Wilshire is plotted using a black line.

This should dispel the notion that because gold does not provide a dividend, it cannot perform as well as stocks. During bull runs, both gold and silver have the ability to outperform the stock market indices regardless of what direction the stock markets are going.

The S&P 500 is currently in one of the strongest bull markets in its history. The following chart points out how far the current bull market has gone compared with historic S&P bull markets. 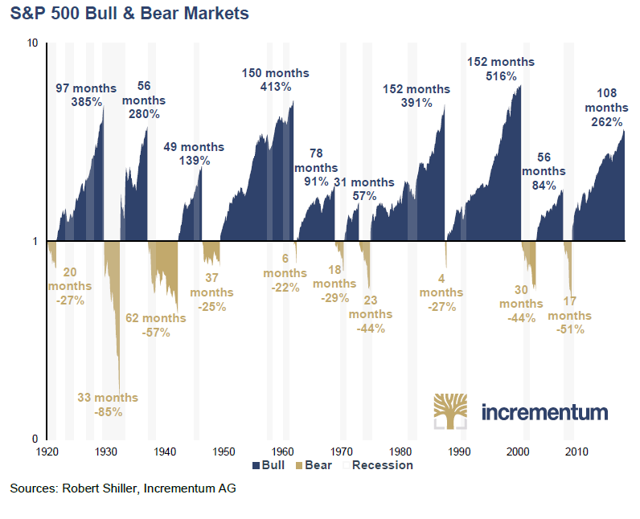 One should expect when the stock market indices finally turn south, precious metals investors will finally see the total returns they have come to expect over the last two decades. Investors will flee to the GLD and SLV funds when stocks reverse during the next stock bear market period, which will push up gold prices. Gold and silver have plenty of fuel left in the tank to continue their decades-long run against stocks.

How much room to run? The US dollar cycle chart (above) shows the dollar in a downward trend since 1985. The dollar index reacts to each US economic recession with lower highs and lower lows, clearly pointing out the loss of confidence in US currency over the longer term.

Comparatively, the stock indices have reached all-time individual highs during the same time frame. US stocks are very overvalued relative to the world market view on dollar strength. This is largely due to the excessive fiat currency pushing up the stock markets via a period of historically high corporate debt accumulation.

Each successive dollar, however, has been worth less against a basket of other currencies. Stock markets will not rise forever; therefore, upon the creation of more cheap fiat money, each new dollar creates less inflation in the stock markets. Eventually, the relationship of excess money printing and stock market bubbles will burst completely.

Stocks will be measured more accurately in an historically stable monetary unit such as gold. In order for that price pair to reach equilibrium, gold will have to rise substantially compared to the broad stock indices.

This will occur regardless of the strength in the dollar in world currency terms. Put differently, gold has recently beaten the stock markets because of dollar weakness, even though much of the excess currency has gone into the stock markets.

During the next recession; however, stocks will fall precipitously as corporations with historically high debt balances will not be able to continue their current growth trajectory using cheap central bank fiat money.

At this time, there will be nothing to push the stocks up as investors flee into gold and other physical assets looking for safety and returns. At this point, gold will reach much steeper heights against the stock markets, while the dollar continues to fall relative to other currencies.

Additional disclosure: I own gold and silver.