It seems as though strategists believe the equity market and economy cannot move ahead unless the Fed cuts interest rates.

Now, if the Fed begins to reduce interest rates near term, is the Fed seeing signs of an economy that is slowing, and slowing to the point of a recession?

Since the Federal Reserve began raising the Fed Funds rate in December 2015, there have been nine rate increases. Now that the Fed is in a pause mode, strategists and investors have turned their focus on rate cuts. It seems as though strategists believe the equity market and economy cannot move ahead unless the Fed cuts interest rates. By now many have heard that every recession since World War II has been preceded by an inverted yield curve, i.e., short-term interest rates are higher than long-term interest rate. And therein lies the issue with the focus on the Fed's interest rate decisions. 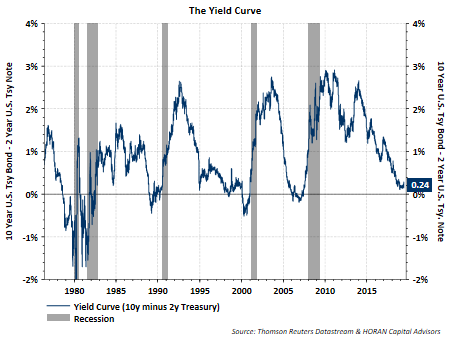 The small spread in the above chart is representative of a flattish yield curve for the 2y/10y spread. The red line in the below chart represents the current shape of the yield curve. Clearly, the very short end of the curve has inverted relative to the 10-year Treasury bond yield. 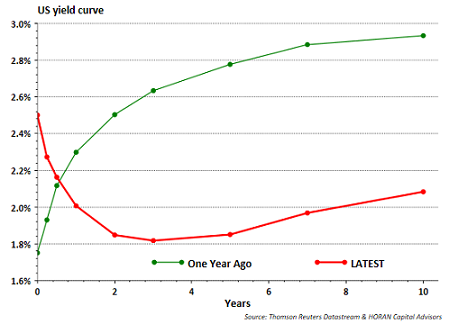 Generally, the Fed begins to increase short-term interest rates in an effort to get rates back to a more normal level as the economy nears full employment and to keep inflation at a targeted level. Prior to Fed Funds rate increases, the rate has been below a normal level, as rate reductions were likely initiated in an effort to stimulate economic growth coming out of a recession. So now, if the Fed begins to reduce interest rates near term, is the Fed seeing signs of an economy that is slowing, and slowing to the point of a recession? A similar rate pattern played out in the mid-1990s as seen in the below chart. At that time, after beginning a rate increase cycle, the Fed reduced rates a few times and the economy continued on its expansionary track for five more years. This type of pattern could repeat itself later this year. 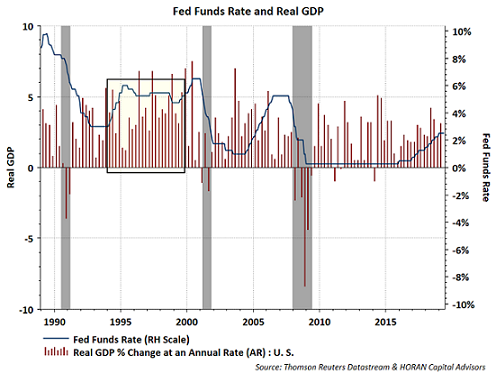 And lastly, recently I have seen charts noting equity market weakness during Fed Funds rate decreases. During the mid-1990s period though, the equity market continued on its upward growth trajectory as seen below. 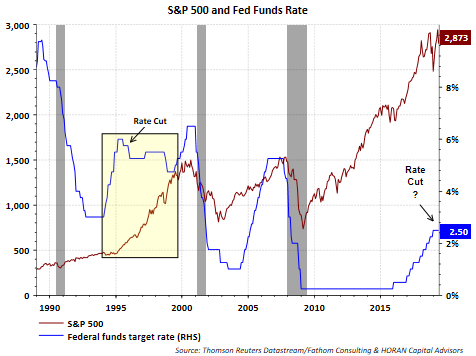 Finally, putting the equity market and Fed Funds rate changes in perspective, Sam Stovall, chief investment strategist at CFRA Research, published an article in the AAII magazine in 2009, "Don't Fight The Fed; Interest Rates and Their Impact on the Stock Market." The article evaluates S&P 500 changes 6 months and 12 months after rate increases and decreases from 1946 to 2008. In both periods, equity market returns were higher. The highest returning periods were the 6 and 12 months following rate cuts as seen below. 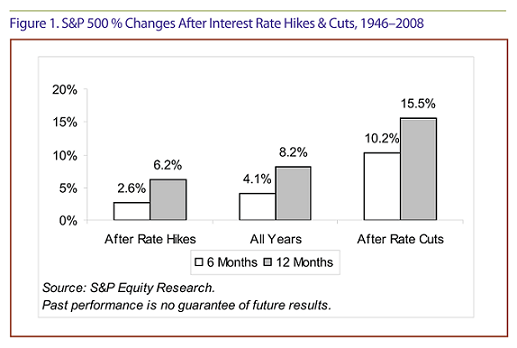 The article does point out the equity market is less predictable during the rate cutting period in the 6-month time frame:

Current economic data is mixed, and some of the weaker data is worth accounting for in one's analysis going forward. However, news headline sentiment seems to be projecting a more dire economic environment at this point in time. One concern is, collectively, we can talk ourselves into an economic slowdown in spite of strong economic underpinnings. The current environment though seems more like a 2015/2016 slowdown and not one where a full-blown recession is on the horizon, but the environment is a more fluid and challenging one for sure.

Follow David I. Templeton, CFA and get email alerts
+
Add a comment
Disagree with this article? Submit your own.
To report a factual error in this article, click here.
Your feedback matters to us!