Microsoft's Buyback Program More Than Pays For Itself

Its Buybacks Bring $1.25 to Shareholders For Every $1 Spent. Microsoft (NASDAQ:MSFT) spends a massive amount of its after-tax free cash flow generated each year on its share repurchase program. For example, right now MSFT is in the middle of a $40 billion buyback program which was started in late 2016:

MSFT still has about $15.6 billion to spend during its fiscal fourth quarter (ending June 30, 2019). Over the past three quarters, MSFT has spent $14 billion on share buybacks, based on its cash flow statement, on a net basis, including shares repurchased to sterilize stock issued from stock options:

This represents about 54% of its total free cash flow. Dividends take up about 39%. I wanted to see if MSFT's massive commitment to buybacks has been worth it. Is it possible to determine that for every $1 spent on share repurchases has yielded at least $1 in value for shareholders? Here is the methodology I used. First, I analyzed MSFT's history of dividends and share buybacks. Then I tried to determine what would happen to the stock and dividends per share if there had not been any buybacks. This is sort of a thought experiment, except that I used the actual figures and ratios that MSFT has experienced, except for the buybacks. Then I compared MSFT's history over the past 15 years, in terms of shareholder returns, to the case where no share buybacks were used. I found out that for every $1 spent on buybacks about $1.25 was returned to shareholders.

MSFT's History of Buybacks and Dividends. It turns out that MSFT has been paying dividends for about 17 years since 2003, so I used that period to study its total spending on shareholder value (dividends and buybacks). The next table and chart show several things. It shows that spending on shareholder value has averaged 74% of free cash flow (NYSE:FCF) for the past 15 years, and a higher amount of 94% for the past 5 years. 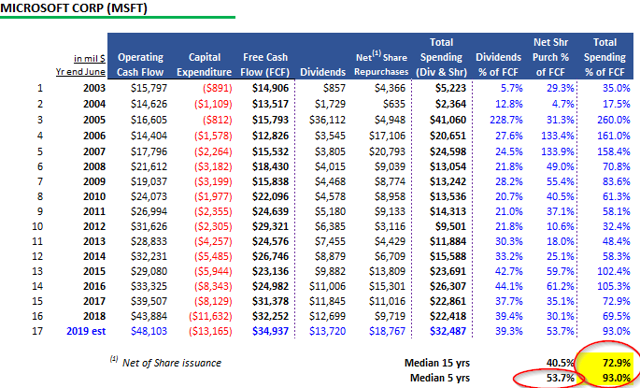 You can see from the above table that in the past 5 years, MSFT has increased its proportion of FCF spent on buybacks to 54% from 40.5% over 15 years. 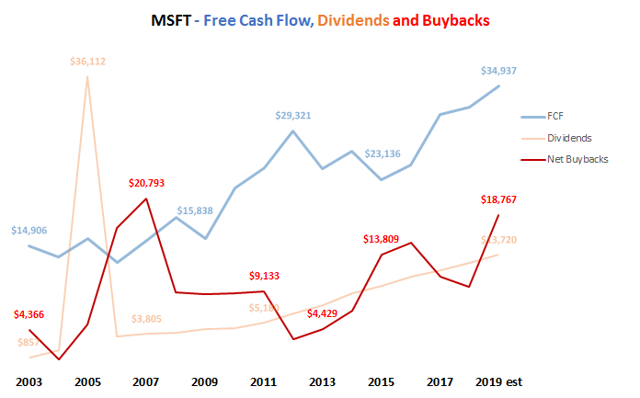 The table and chart above show that as FCF has grown about 6.5% on a compounded average annual growth rate (OTCPK:CAGR) over the past 15 years (and a slower 5.5% in the past 5 years) dividends have been risen fairly steadily and buybacks have grown, albeit at a jagged, but higher proportion of FCF.

This table shows that about 93% of FCF has been spent on shareholder value (dividends and buybacks) over the past 17 years.

Share Count. With all this money spent on shares, what has happened to the number of shares outstanding, since the time MSFT started paying dividends? 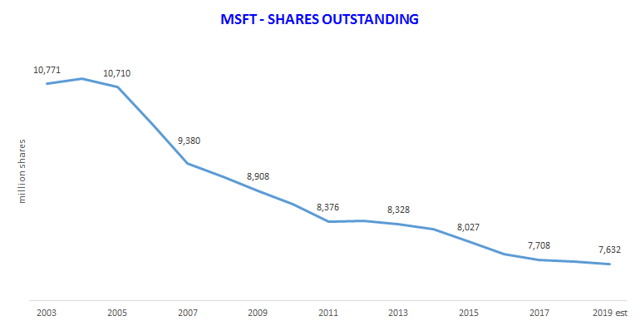 So MSFT is now a $ trillion market value company. It has reduced its share count by 30% in the past 15 years and has paid over $11.76 per share in dividends in the past 10 years. In the process, MSFT has grown its cash balances as well. This is important as the net P/E over the past 15 years (after deducting the net cash balances - i.e. after debt taken on as well) have not been as expensive as the nominal P/E ratios. See the tables below: 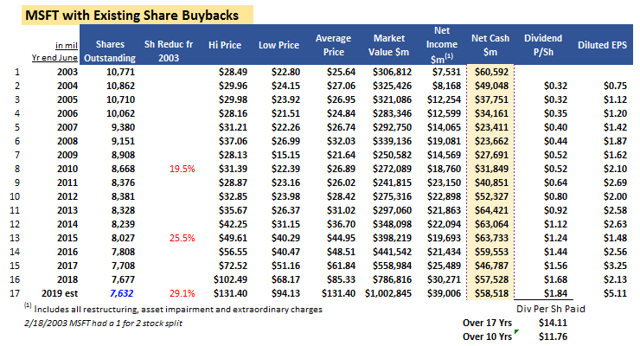 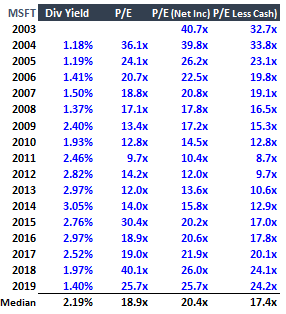 A calculation without Share buybacks. Using the information from above, we can estimate what would have happened without share buybacks. One major assumption is that the share count stays the same as in 2003 when dividends first started being paid. At that time the share count was over 10.7 billion (today it is 7.6 billion). Next, we assume that the cash builds up and a special dividend is later paid to shareholders. In other words, we leave the dividend payments the same and let the cash accumulate. There are two reasons. First, companies tend to pay dividends as a percentage of total net income. This allows dividends to stay stable. Second, it allows cash to build up. If there are no buybacks, it can be used either for large purchases, such as Microsoft's $26 billion cash purchase of LinkedIn in 2016 or for special dividends, such as the one it paid in 2003.

The calculations can be seen in the next table. 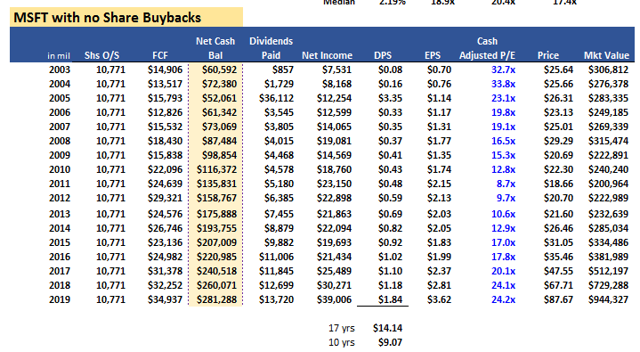 This table shows the share count stays the same, but cash builds up. Without buybacks, cash reaches $281 billion, instead of today's net cash (after debt) of $58.5 billion seen in the earlier table above. Now to also complete the analytical comparison, let's assume that most of the net cash is paid out to shareholders in a special dividend with the higher share count, except for the beginning balance of $60.5 billion:

This would result in a special payment of $20.49 per share to shareholders, and still leave the original $60.5 billion in the company's balance sheet.

Look at the ending results of each table For example, without buybacks, MSFT generates $39 billion in net income (the same as with buybacks), but it has a higher amount of shares outstanding, or 10.7 billion. That results in an EPS of $3.62. But with share repurchases, the denominator is 30% less (7.6 billion), yielding an EPS of $5.11. Now, using the same cash-adjusted P/E ratio, the end price is $87.67 per share without buybacks, vs. $131.40 today (June 7, 2019). Today's price is 50% higher. Also, for the past 10 years, there would have been just $9.07 in dividends per share paid without buybacks, versus $11.76 with buybacks. Again, this is due to the lower number of shares outstanding. (We will add in the special dividend in the comparison below to be fair.)

One last point, note that the market value without buybacks would be just $944 billion, vs. $1 trillion with buybacks. There are several reasons for this. First, the market tends to not like stocks with large amounts of cash. It tends to penalize them since cash does not earn money. Second, with buybacks, the money is earning the same return on equity as the business, which is almost always higher than cash returns. It does this by lowering the share count, and hence effectively earning the same return on equity. We used the same P/E ratio in both cases, which is adjusted by deducting the cash balance from the market cap and then dividing it by the earnings.

Comparison of returns. The results for the last 10 years can be seen in the next set of tables: 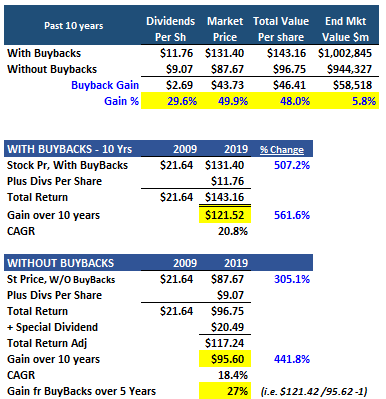 This shows that the total return in the past 10 years with buybacks is 27% higher than without buybacks. Note this comparison even includes a special dividend payment of $20.49 for the no buyback calculation. In effect, in the past 10 years, MSFT has returned $121.52 per share in total returns, or 20.8% compounded annually, on the original investment. Without buybacks, but including a special dividend with all the extra cash, only $95.60 would be returned. The difference is a gain of 27%. This means that for every dollar spent on buybacks, $1.27 is returned to shareholders.

The same is true for the past 17 years: 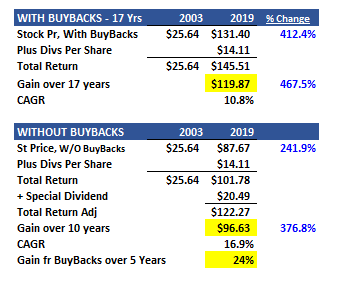 5 Year Forecast Shows MSFT is Worth $184

We can forecast the next five years using the information we have learned from MSFT's huge share buybacks, its FCF, which grows 5.5% per year, the fact that buybacks return $1.25 for every $1 spent, the average 54% of FCF that is spent on share buybacks, and the average dividend yield of 1.4%. Here is a table that shows how that works:

The steps are: (1) FCF grows each year by 5.5% (its average growth rate over the past 5 years - see the table above); (2) the dividends are set as a percentage of FCF (39%), the percentage for the past five years (see the stack column chart above); (3) the dividends are divided by 1.40% (this year's dividend yield) to obtain the market value, which is then (4) divided by the new number of shares after the share buybacks (at an average share price) to determine the new share price. (There is an iterative issue about which share price to use to buy back the shares, so an assumption is made that the initial share price is used at the beginning of the year and then hardcoded that into the formula to determine the average share price per share.) The main factors affecting this model are the FCF growth rate and the dividend yield used.

The result is that the stock price will be $183.44 in five years. This is 40% above today's price. The market value will be $1.27 trillion up 26.7%. The stock gains more than the market value because share buybacks reduce the denominator, effectively leveraging the return on a per share basis.

What could go wrong? This model is extremely sensitive to the dividend yield used. With a slightly higher yield, the share price in 5 years will be lower. For example, the average yield over the past 5 years has been 2.2%, vs. 1.4% today. If the model dividend yield is adjusted up half that amount to 1.80%, the resulting price is $147.51 per share, up just 12.3%. But the market value would actually be lower by 1.5%. This is theoretically possible since again the denominator would be lower with the fewer number of shares. But it does not seem realistic. The model envisions progressively higher dividends per share each year, based on even higher growth in free cash flow. If FCF was trending lower it might lead to a higher dividend yield. So short of a downturn in the growth of FCF, it seems more likely that the dividend yield will stay constant. A major market downturn or an increase in long term interest rates would likely tend to move all stocks' dividend yields upward. But in this model, we hold everything else constant, including the dividend yield, short of a major downturn in MSFT's profits.

Mark R. Hake, CFA, has been a consultant to various companies, including hedge funds, software, and technology companies. Prior to that, Mr. Hake was President of Hake Investment Research and Hake Capital Management. He has been featured in Barron’s, CNBC, Bloomberg, and other news organizations as a contrarian investor and deep value specialist.