Last week we touched on the stark difference between high-yield, high-risk REITs and low-yield, lower-risk REITs and compared some of the underlying holdings of two ETFs. The question of whether to play it safe or not, really depends on each investor's preference, but that article focused primarily on equity REITs, a sector that we are neutral on based on valuations and one which investors have shown a heightened level of interest in. In a previous article, The Belgian Dentist shines a light on the bullish sentiment toward REITs and how extreme levels of sentiment can be a strong contrarian signal.

Now that the yield curve is inverted or at least flirting with inversion, depending on which part of the yield curve you consider, the prospect of lower rates has increased. It seems only a month ago - maybe two - that we were looking at investment options for rising rates. As confusing as that might be and as whip-sawed as we might feel as investors, we need to be aware of the best opportunities to invest in if the yield curve stays inverted and a rate cut happens. 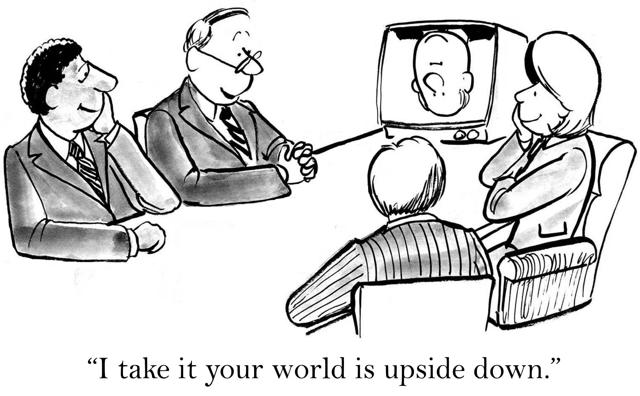 The yield curve on US Treasuries recently inverted again and once again talks about an imminent recession have started. Some economists will tell you that an inverted yield curve has preceded every one of the past seven recessions and that's certainly true. But the yield curve also has been inverted on several occasions that were not followed by a recession. "This time is different" is a phrase coined quite frequently, because frankly, this time IS different, and there are unique factors that may or may not cause the economy to dip into a recession.

For one, the economy isn't doing too bad. Unemployment remains below 4%, corporate profits are still strong even if they have come down from their cycle peak, housing starts have been tepid but not declining, and the Conference Board's Leading Economic Index actually increased in April. The LEI did indicate a slower rate of growth over the previous six-month period but it usually declines more than 1% from the previous year before a recession looms.

Looking back over the last five recessions, we can see from the chart below that the yield curve did indeed invert before a recession started.

But notice how much higher the two-year rate was when the yield curve inverted.

The current two-year rate is at just 2.0%, so money isn't tight, and the reason the yield curve is inverted has more to do with the diminished term premium investors demand from holding longer-dated bonds, not because the two-year is restrictive. In an article I read this weekend, Payden & Rygel suggests that the yield curve should account for this term premium, and when it does, the curve isn't inverted yet. They use the 10-year – three-month spread instead of the 10-year –two-year spread, but their thesis is that "this yield curve says no recession yet." 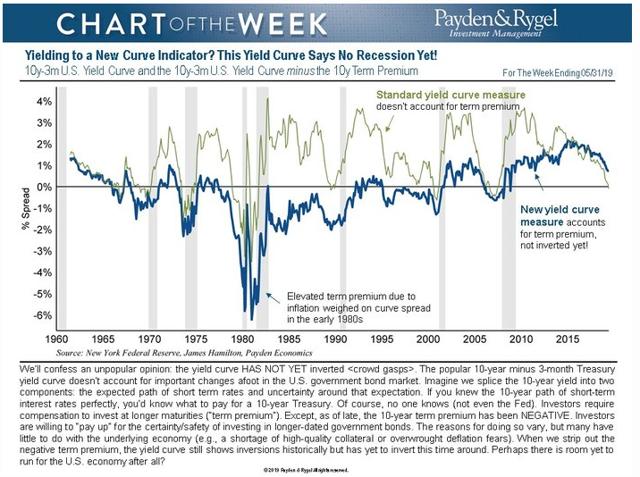 I can't predict the future so I'm not even going to try, but I can evaluate my investment options based on known information. We know the yield curve is either very flat or slightly inverted when measured "as-is" and not withstanding the Payden & Rygel theory that "this time is different," the fact is we have been in an expansionary period for so long that as of next month, it will be the longest expansion in history. That's not to say the economy won't expand for another year, two years, or longer, but as both charts above indicate, the yield curve is much flatter than it was just a few years ago. So what income ideas can we implement in our portfolio that might benefit from an inverted yield curve, or more specifically – a yield curve that might soon start to steepen?

Everyone talks about how mREITs suffer when short-term yields rise relative to long-term yields. Since they borrow short term and invest long term, the spread between the two is diminished when the yield curve is flat and they are forced to increase leverage to generate the same level of returns they otherwise would have been able to generate. My top pick is Annaly Capital (NLY), one of our mREIT positions, which is down 12% in the last 30 days. If we look forward instead of backward, we might conclude that short-term rates are more likely to decline and that the yield curve is more likely to steepen. We don't know when that will happen, but the Fed Dot Plot is showing increasing probabilities of a rate cut. That would be positive for mREITs. 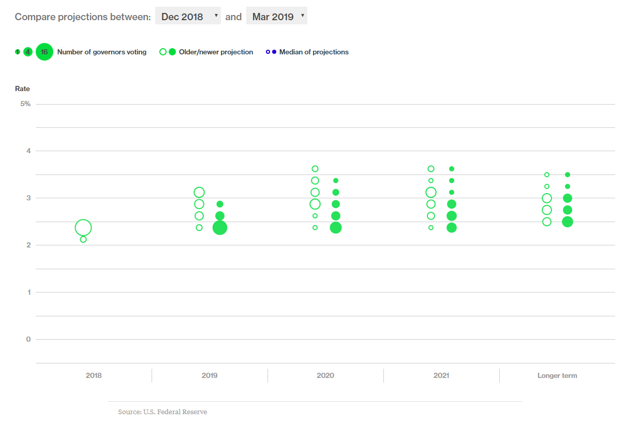 Another option is the iShares Mortgage Real Estate ETF (REM) if you prefer not to be concentrated in single names. Annaly is the largest holding but it also has another 34 stocks that provide diversification. The distribution yield is only 6.7% so temper the expectations of income compared to the double-digit dividend yields that the underlying stocks pay.

If you're a bit wary about investing in mortgage REITs, I completely understand. They are highly leveraged and can be hard to figure out, especially with the different types of mortgages and the variety of hedging techniques used to protect against adverse changes in rates. If mREITs aren't for you, here are some other options.

Let's assume that a recession does occur – when that happens, high quality companies may still decline but less so than lower quality companies, and if those companies pay dividends, their returns tend to be more stable as the dividend provides a cushion of safety and cash flow to invest at lower prices.

Where do you find these stocks? We follow a portfolio of them in The Income Strategist, but you can also take a look at the top holdings in the ProShares S&P 500 Dividend Aristocrats ETF (NOBL). 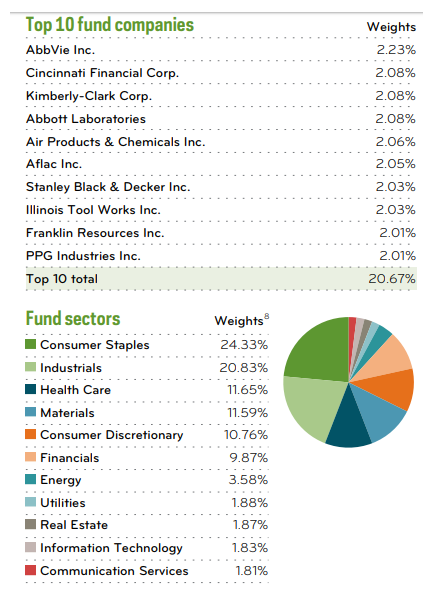 If the top holdings don’t draw your attention, look for opportunities within some of the top sectors. Consumer Staples is the largest sector, which is made up of companies whose products we buy regardless of how well the economy is doing.

For this reason, I recently added the iShares Short Treasury Bond ETF (SHV) to one of my personal portfolios. It doesn't meet the criteria for any of The Income Strategist portfolios but might be a good diversifier. It pays a distribution yield of 2.4% - not much but it adds stability to an otherwise high income portfolio.

An inverted yield curve is no reason to panic. A recession could be near, but that conclusion could have been drawn from the fact we are in a 10-year expansion. It certainly can't go on forever. Instead of thinking about whether a recession is coming, I prefer to think about how to position my portfolio during an inverted yield curve, while also keeping an eye on some of the other factors that together could be better predictors of an economic contraction.

Portfolio strategies and investment ideas for income investors and retirees.

Besides tactical allocations and individual securities, join us to get access to our research, portfolios, and other benefits, including

Arturo Neto, CFA
11.02K Followers
I have been involved in financial services for almost 30 years. When I first started focusing on financial planning and money management it was out of a first-hand experience watching friends and family having to work well past retirement age because they hadn't saved or invested enough. Eventually I landed in a family office worth hundreds of millions of dollars where I was able to see 'how the other half lived' so to speak. I now operate a wealth advisory firm and publish articles on Seeking Alpha for DIY investors that prefer to manage their own money. As publisher of The Income Strategist, a premium subscription service on SA, my goal is to guide investors on how best to generate income from their investments. The service includes several income portfolios with different strategies that members can use independently or in combination. As part of the service, I also collaborate with other SA authors to provide broader and deeper coverage of investing. In addition to being a Chartered Financial Analyst, I am also a Certified Private Wealth Advisor and have an MBA from the Darden Graduate School of Business at the University of Virginia. I also hold a Master of Science in Finance and Bachelors in Finance from Florida International University. Having lived in Miami almost my entire life, my family and I relocated to Nashville, Tennessee in May 2018 in the pursuit of a better lifestyle and southern hospitality. If you're ever in the area, please do reach out. I'm happy to be teaming up with the following expert analyst contributors:1. Dilantha De Silva2. The Belgian Dentist
Follow

Disclosure: I am/we are long NLY. I wrote this article myself, and it expresses my own opinions. I am not receiving compensation for it (other than from Seeking Alpha). I have no business relationship with any company whose stock is mentioned in this article.

Additional disclosure: This article is meant to identify an idea for further research and analysis and should not be taken as a recommendation to invest. It does not provide individualized advice or recommendations for any specific reader. Also note that we may not cover all relevant risks related to the ideas presented in this article. Readers should conduct their own due diligence and carefully consider their own investment objectives, risk tolerance, time horizon, tax situation, liquidity needs, and concentration levels, or contact their advisor to determine if any ideas presented here are appropriate for their unique circumstances. Furthermore, none of the ideas presented here are necessarily related to NFG Wealth Advisors or any portfolio managed by NFG.