According the CME FedWatch tool, Fed Funds futures markets are currently pricing in a 98.5% chance of the Federal Reserve lowering rates at least once this year. Breaking it down further, there is a 31.9% probability of 2 rate cuts and a 35.4% chance of three 25 basis point rate decreases, as can be seen in the image below. 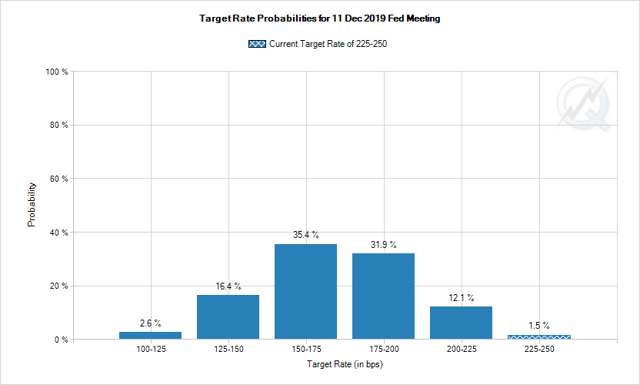 In accordance, treasury yields have plunged. In Jerome Powell's speech, he did not explicitly state lower rates were on the horizon. He simply said the Fed will act appropriately as always to sustain the expansion. It was kind of a no-news, obvious statement, but many market participants took the statement as implying a lower Federal Funds rate. While the U.S. economy has slowed from a blistering pace of outperformance versus other developed economies last year, it is still in a "good place," as several Fed officials have stated, with trend line growth, near-full employment and price stability, despite inflation running a bit below target. Another effective lower-bound situation that Powell described is unlikely.

I will say the Federal Reserve should be careful trying to squeeze the last 0.3 or 0.4 percentage points out of inflation and pushing the labor market past its non-accelerating inflation rate of unemployment (NAIRU). I don't think central banks truly have the precision to manage inflation to that degree of accuracy. The dual mandate of the Fed is to maximum employment and price stability at 2% PCE inflation. This is largely achieved, and the focus from the central bank of the United States should be to maintain the environment, not fret about a minimal inflation shortfall. After several years of quantitative easing (QE) and prolonged low rates, moving the Federal Funds rate down here is playing with fire on the inflation front, in my opinion. I believe Phillips curve effects (the supposed inverse correlation between unemployment and inflation) will return and the curve is not dead. It is hibernating. Also, alternative measure of inflation, such as the Dallas Fed's trimmed mean, is running exactly at target rate.

I support the pause on interest rates from the Federal Reserve here, but I would not endorse a rate cut. I cannot tell you what the Federal Reserve will do, but I believe I have a very good idea what it should do, and that is continued pausing. If the Fed does not deliver the rate decreases expected by the market, treasury yields (TLT, TBT) across the curve will likely rise.

I believe global growth is slowing and this will continue. Trade tensions are going to further negatively affect this, but it was already occurring in the data before trade talks between China and the United States crumbled. This slowing is deeply ingrained in the global economy, and there isn't a quick fix at this point. I expect central banks in Europe (HEDJ, DEUR) and China (FXI) to eventually be forced to lower rates and/or reinitiate QE. At the same time, the United States is in a much better place, and I'm not convinced of the need for lower rates here as stated above, despite the 98.5% chance implied by the market.

One of my core positions and themes running through the portfolio is being anti-global growth and shorting the commodity sector, growth assets and essentially anything dependent on Chinese demand. In particular, I am short copper miners, iron ore miners and oil producers (OIL, XLE, SCO). Companies include Freeport-McMoRan (FCX), Vale (VALE), Continental Resources (CLR) and Petrobras (PBR). I am short using fairly near-the-money, long-term put options with expirations in January 2020 and January 2021.

The second theme is being short precious metals (DUST, JDST). For one, I believe expectations for lower rates have gone too far. There is minimal upside to owning gold this year at this point, as it's pushing up against a long-run resistance at $1350 and lower rates by year-end are already priced in. Now, if the Fed were to lower in July or more near term, gold could potentially move higher, but a single December rate cut would actually severely underwhelm gold and treasury bulls.

Secondly - and this goes along with the anti-global-growth theme in the portfolio - inflationary expectations are shifting downwards, and this dampens gold's appeal as an inflation hedge. Now, the ideal situation for the gold bears is the Federal Reserve not lowering rates, while inflation expectations continue to decline. This would push up expected real (inflation expectation adjusted) treasury yields, thereby increasing the opportunity cost of holding gold (GDXJ, GDX).

While I am net short, I do hold long positions in individual names I like, including Opko Health (OPK) and Texas Mineral Resources (OTCQB:TMRC). I find the defensive biotech sector (XBI) and volatile rare earth sector to be a great hedge and could combine to profit with other positions, so it is not a pure hedge. I am very bullish on Opko's CKD drug, Rayaldee.

The Chinese have threatened to weaponize their rare earth dominance by cutting off rare earth exports to the United States. This would not only lead to a shortage in the global export market, it is also part of a plan to encourage high-tech, value-added manufacturing to move to China in order to secure supply and benefit from lower domestic Chinese prices versus prices in the export market. This is why rare earths are a chess piece in the trade war between the United States and China. It is critical for the United States to develop a rare earth supply chain.

It is quite difficult to find rare earth exposure (REMX), but a particular company I've taken a position in is Texas Mineral Resources Corp. It is a micro-cap, OTC stock, but I believe it is the leading rare earth junior miner in the United States. It is common knowledge that rare earths are not in fact rare, but the technology and ability to separate and purify the elements is. Texas Mineral Resources has demonstrated separation and purification capabilities with partner K-Technologies using continuous ion exchange and continuous ion chromatography technology. The company also has contracts with the Department of Defense and Department of Energy. According the Texas Mineral Resources CEO Dan Gorski:

TMRC has now demonstrated that we can separate rare earth elements to ultra-high purity levels – and we can do it with feedstock sourced here in the United States, and separated here in the U.S. as well. We are prepared to assist the DLA and other U.S. government entities as they look to develop a secure source of critical material

Also, TMRC's Round Top project is being expedited and considered high priority by the U.S. government:

TMRC is also pleased to announce that the White House CEQ has approved and advanced Texas governor Greg Abbott’s request to designate the Round Top project as a “High Priority Infrastructure Project”. Final approval is pending with the FPISC. By way of background, Executive Order 13766, signed by President Trump on January 24, 2017, established a new system by which to fast-track the construction of infrastructure projects. The Order directed executive agencies to expedite environmental reviews and approvals for all infrastructure projects that are deemed a “high priority to the nation” and should be granted preference in the licensing process.

In short, I believe either the global macroeconomic picture will stabilize and the precious metals sector will decline as expectations for a Fed rate cut dwindle, or the global downturn will be significant and sustained, which would negatively affect demand for commodities such as oil, copper and iron ore. There is also potential for both positions to profit substantially if the Federal Reserve decides to look through turbulence as transitory and not lower rates against market expectations while a deceleration in the global economy occurs.

As I have not written in a while, I hope this article provided some clear insight for followers and readers into the current portfolio set-up and reasoning behind it. I believe it is hedged against a variety of environments and scenarios that could potentially play out. I hope some of these ideas resonated with readers, and while many will not agree with everything, I would love to hear thoughtful disagreement and different opinions.

Michael Roat
1.43K Followers
Author of Tri-Macro Research
Learn to invest like the pros, based on central bank policy and global data
I have approximately 8 years of experience trading and 10 years of researching, specifically relating to central banking and credit cycles. I have developed a keen ability to synthesize and understand complex macroeconomic information very effectively and quickly. I have an in-depth understanding of international capital flows, foreign exchange rates, and global bond, equity and commodity markets. I have extensive experience tracking economic data and developing macro-economic investment theses. I specialize in and often express views relating to currencies, monetary policy, real (inflation-expectation-adjusted) interest rates and bond yield differentials. I avidly read and process daily economic news, analysis and market data. I can contribute to relevant economic thinking and discussion as well as generating and assessing investment ideas using the knowledge I’ve developed through first-hand experience trading in competitive financial markets.

Disclosure: I am not a registered financial advisor. I am a newsletter provider and nothing published under the name Michael Roat or Tri-Macro Research should be considered financial or investment advice.

Disclosure: I am/we are short GOLD, WPM, CLR, FCX, VALE, PBR, RGLD. I wrote this article myself, and it expresses my own opinions. I am not receiving compensation for it (other than from Seeking Alpha). I have no business relationship with any company whose stock is mentioned in this article.