It seems like every day Beyond Meat(NASDAQ:BYND) reaches a more and more ludicrous valuation. Its market cap has now reached an eye-popping $8bil valuation on just 40mil of quarterly revenues. For this article, we decided to go Beyond our usual fundamental analysis and try at the Beyond burger at a nearby restaurant. Our conclusion: Beyond is overrated in pretty much every way possible.

Although we accept that the bull case is plausible, we think it is extremely unlikely that it would play out this way due to multiple factors, which we will explain below.

Firstly, Beyond Meat's TAM is extremely overrated and much lower than most people think.

The global meat industry is projected to grow to 1.6tril by 2022. That may seem like a lot and may look good for Beyond Meat, but the real TAM is actually much lower. If you assume that everyone in the top 1% of the world's population by income(income > $32400 USD per year) are willing to buy 360 Beyond Meat products per year at an ASP of $5, the TAM shrinks to $135bil a year. That is less than 1/10th of the world meat industry and a measly TAM for a company valued like Beyond Meat. That TAM is also very aggressively calculated, and food preferences and other factors like affordability are likely to reduce the TAM further.

Secondly, competition is fierce in the alternative meat industry.

Even in the plant-based meat arena, there are many choices. Other than market leaders Beyond Meat and Impossible Burger, there are alternatives like Lightlife and Morningstar. There is no shortage of funding, with big investors like Bill Gates or companies like Nestle ready to invest large sums in promising startups.

Thirdly, Beyond is significantly inferior to real meat. 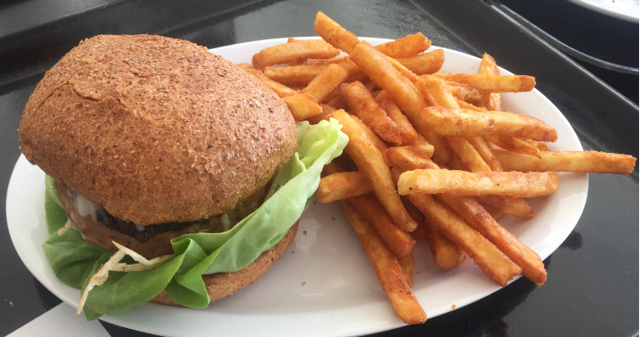 Beyond Burger and fries - pic by us

We tried a Beyond burger recently. The first thing we noticed was that it was significantly more expensive than a beef burger, about $3-4 more expensive. When we ordered it, it took significantly longer than a normal burger to cook, with the chef finishing preparing 5-6 orders in the time it to cook our Beyond burger. The chef told us that it was because the Beyond patty took longer to cook, though its possible his inexperience with vegetarian burgers could've lengthened the preparation period.

Afterwards, we tasted both the burger and the patty alone, but do note our opinions are subjective. The patty didn't smell like beef, but more like a cross of canned tuna and black bean. The taste wasn't beef, but more of a turkey flavor. Texture was similar to beef. We had others try the patty, and they agreed with our assessment - it didn't taste like beef at all. The burger wasn't terrible though, except for the fact that it was a bit dry - it was satisfactory and we finished it quickly.

Overall, this isn't a beef substitute, it is more expensive, takes longer to prepare, and doesn't taste like beef, though that may be subjective. In our opinion, Beyond Meat won't be taking significant market share from real meat in its current form, especially with great burgers like those from Shake Shack being offered.

Also, it may not be healthier than real meat. A study from BusinessInsider shows that Beyond Meat's patties contain significantly more sodium than a comparable beef patty.

Lastly, Beyond Meat has an absolutely ludicrous valuation.

The most obvious tenet in Beyond Meat's bear case is its absolutely ridiculous valuation. Beyond Meat trades at 43x annualized sales - no that is not a typo. That is absolutely insane for any company, let alone a company in a capital intensive and competitive industry like the meat industry. It is still extremely unprofitable and there are just no major catalysts to shift people from eating real meat to plant based meats, other than saving the environment.

In our opinion, plant based meats are a fad and Beyond's high sales growth are a result of a short term demand catalyst from a shortage of the Impossible Burger coupled with millennials eager to try out something new. This growth is unsustainable and will have to slow down significantly in the next few years. Again, there is no groundbreaking reason for people to shift their meat consumption to plant based meats. We believe that Beyond should trade at 4-5x sales, or over 90% below its current valuation.

Looking at their Q1 results, it looks just like a growth company in its early stages. There didn't seem to be anything that warranted a nearly 40% increase in the share price, especially considering results were likely inflated by the Impossible Burger food shortage mentioned earlier. The beat was minimal - EPS beat by $0.01 and revenue beat by around $1.2mil. There is nothing that warrants a 40% rise in the share price - no giant wins, no massive product launch, nothing. We believe the massive rise is merely investor optimism and a limited float.

Beyond Meat is extremely overvalued in its current state. Investors should ignore the hype and maybe when shares become available more savvy investors can think about starting a short position. Beyond is not safe to buy in any scenario.

WY Capital
6.74K Followers
Looking out for underrated companies that could shape the future of humanity, or just provide strong returns over the long run. Note that my opinions could change after conducting more research or based on anything, honestly. DYODD