CARBO Ceramics is a very interesting company. The current market capitalization is less than 50 million dollars. This company was worth 100 times more just a few years ago! Demand for their products has significantly declined while their efforts to diversify away from oilfield sector were not successful. 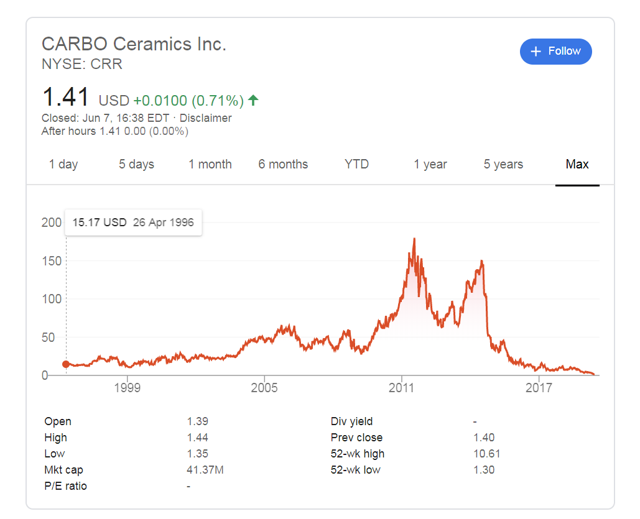 Why did CARBO Ceramics found itself in such a big hole?

CARBO Ceramics Inc. is in the business of manufacturing and selling various products which are used in the hydraulic fracturing of natural gas and oil wells. Their main and most lucrative product is ceramic proppant which has been losing market share since 2012 to a much cheaper frac sand. Unfortunately there are no indications that these trends can ever be reversed. That's why CARBO is trying to diversify.

Can we trust management?

First of all the company touts metrics that don't meaningfully capture the health of their business. For example, consider the following image: 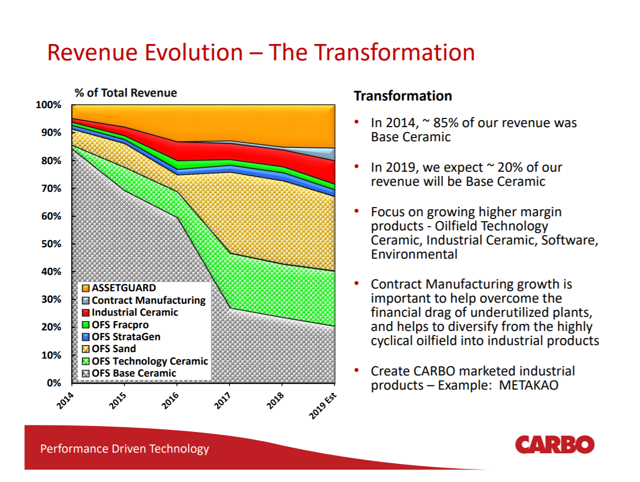 CARBO's management after 2014 began to measure their overall progress by how successful they are in lowering the percentage of revenues which company get from its main product - Base Ceramic. So they often highlight the fact that in 2014 Base Ceramic was ~85% of revenue and now it is only ~20%. What they always forget to mention that revenue between 2014 to 2019 declined from $648 million to $211 million!

Also management claim that they are making financial progress: 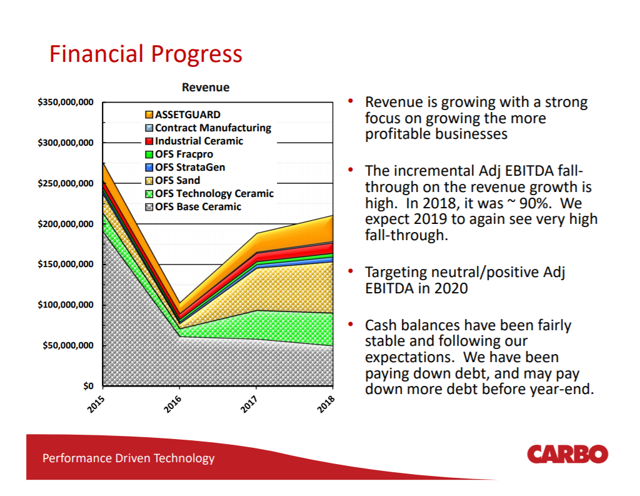 But they never mention in press releases or their presentations that they continue to massively dilute their shareholders with an at-the-market stock sales program ( the gross $ amounts are in 000's):

With present prices they can increase share count by around 50%!

Also troubling sign is that William C. Morris - chairman and one of the founders of the company resigned this year from the board. He is not exactly young (80 years old) but no reason was publicly given for his resignation.

He is also a major shareholder of the company with 3,375,622 shares (11.8%). Think about it a little bit. This shareholding was worth around 500 million dollars just 5 years ago! And Mr. Morris spent many millions more buying shares in the open market back in 2015 and 2016. It is quite sobering to understand that even wise, old, rich insiders can make big mistakes...

Another major shareholders are Dan Howard Wilks and Farris Cullen Wilks, also known as the Wilks Brothers (https://en.wikipedia.org/wiki/Dan_and_Farris_Wilks). They own 3,091,893 shares and warrants to buy 523,022 shares more (exercise price of $14.91 per share, payable in cash, expires on December 31, 2022). Their stake cost them at least 5 times current share price. But the interesting part here is that they are also a major lenders to the company. The company owes them $65 million, and it needs cash proceeds from the sale of some assets (which took place last year) to cover these (the gross $ amounts are in 000's):

As of December 31, 2018, the Company’s outstanding debt under its New Credit Agreement was $65,000. Within 270 days of completion of all post-closing matters relating to the sale of our Millen, Georgia plant, the Company is required to use 100% of the Net Cash Proceeds (as defined in the New Credit Agreement) from the sale to either (1) prepay the outstanding principal amount of the Term Loans or (2) reinvest in fixed or capital assets of any Credit Party. The Company is currently evaluating these options, and the Company may engage in negotiations with its lenders with respect to other options. As of December 31, 2018, the Company has classified $15,733 of the outstanding debt as current liabilities, which represents an estimate of the Net Cash Proceeds that the Company would be required to prepay if it did not reinvest in fixed or capital assets. See Note 19 for details on the sale of our Millen, Georgia plant.

The Wilks Brothers will probably own the company in the end - through conversion of debt to equity cause it can save a lot of money and interest expense for the CARBO. Looks like the current market price reflects exactly these developments.

So what do we have?

On the one hand - CARBO Ceramics is an extremely cheap company with only $10 million of debt (net) and a ~$40 million market capitalization. On the other hand the company is cash flow negative, dilutes shareholders continuously, and has debt holders with unknown motivations. The most troubling sign is the demand and competition in their main business. If demand for the expensive ceramic proppants miraculously picks up, that could solve most of CARBO Ceramics problems. Otherwise investors should prepare for some type of restructuring.

Investing in the stock seems only appropriate for those with an appetite for gambling. Any favourable outcome will depend upon alignment of interest between management, major stakeholders (I mean shareholders and debtholders) and public shareholders. But some of management's actions (selling stock at a very low price) indicate that they are likely poor custodians of shareholder capital here.

My advice is to simply stay away from such uncertain situations.