Knot Offshore Partners (NYSE:KNOP) has a healthy distribution coverage and a young fleet. A young fleet avoids many of the replacement problems and declining income challenges that accompanies aging assets. Mr. Market does not care about any of this. Therefore, the publicly traded units have been driven to bargain levels that were unimaginable just a year or so ago.

The issues driving the stock down are more fear-based than fundamentally sound. The trade talk between the United States and China has affected nearly all shipping companies as if they were the same. That same issue has raised fears of an oil surplus and the accompanying price crash when the expected recession (or worse) arrives. But such fear talk is misguided and really only scratches the surface of the major issues affecting this company.

Knot Offshore Partners is very different from many shipping companies. This company competes with Teekay Offshore (TOO) in a number of important shipping markets. Like Teekay Offshore, Knot has long-term contracts. 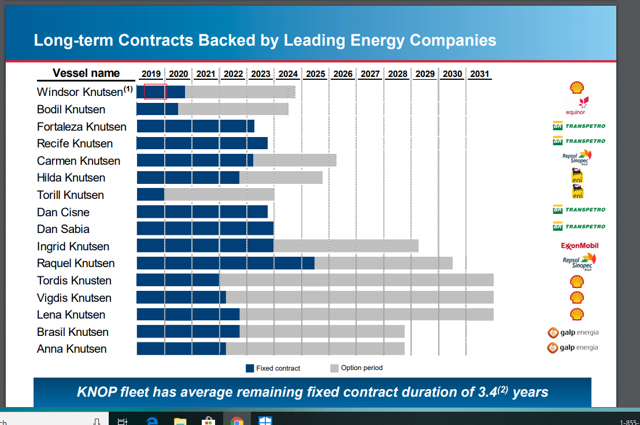 Many of the offshore companies are very large and integrated. Therefore, the price needed by these companies to break-even is often very low. Offshore projects tend to keep producing no matter how hostile industry conditions become.

The result is that Knot has fairly long-term contracts and really is not affected by current events unless those events persist for years. Yet the stock price acts as if the company will show the effects of lower oil prices and the trade war (or anything else you may believe) beginning within a quarter or two.

Many times, the renewal of a contract depends upon the life of that offshore project. Rarely are offshore projects affected by low oil prices. Therefore, renewals for the ships shown above is often a foregone conclusion. If by some chance a contract is not renewed, the current market conditions for these ships appear strong. 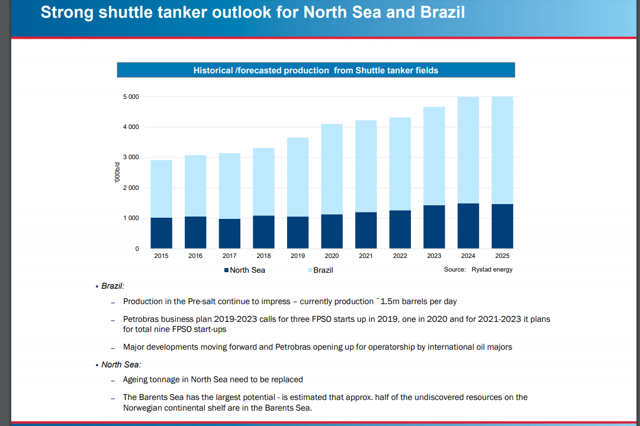 The reason the market is so strong is that the Brazilian oil and gas industry is based upon a relatively new idea about where to find oil. Some of us (showing my age anyway) remember people telling Brazil to just give up that there would never be any oil in the country. But then someone came up with a new idea as to where oil would be and they found a lot of offshore oil. The result was another growing part of the oil and gas industry comparable to the unconventional business in the United States.

Now that this idea has been tried and found to work reasonably well, industry competitors are going to try it out in Africa and other parts of the world. Though the oil and gas industry is often thought of as a mature (and maybe declining) industry, the fact is there are parts of the industry that are relatively young and growing. This growth stimulates demand for specialty ships. Some of those ships are available through the Knot Offshore Partnership.

There is every chance that this partnership has decent growth prospects to combine with a generous distribution that is rarely found in income vehicles.

The latest long-term debt was $976 million at the end of the fiscal year. Partners' capital is a healthy $643 million during the same time period. Cash flow from operating activities was $149 million for the fiscal year. Note that long-term debt is more than 6 times cash flow. For the shipping industry this is acceptable. In fact, it is far better than competitor Teekay Offshore which needed a bailout to survive and no longer pays a distribution.

The distribution coverage is a very healthy 1.5 times, It has been a while since management noticed that the market was no longer rewarding distribution increases so management chose instead to reinvest the cash into the business. As a result, this partnership is far along the transition to no longer needing periodic trips to the capital market to finance growth. Instead, the current distribution coverage assures potential investors that management will have the cash for new ships through cash flow retention.

The demand in the markets served appears strong and growing. Certain parts of the offshore oil and gas industry are relatively new. Those parts of the industry have yet to experience the cyclical characteristics inherent in much of the oil and gas industry. The result is that the demand for shuttles is booming and this partnership is well situated to take advantage of that boom. 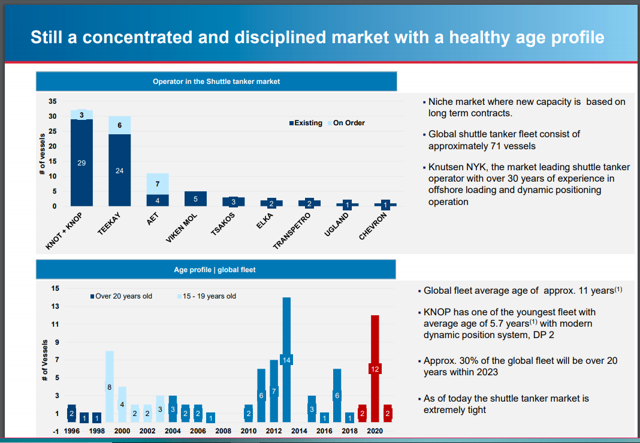 Knot Offshore has one of the youngest fleets shown above. Therefore, investors can take advantage of a market anomaly. Generally, the return of capital that investors receive from a partnership such as this one needs to be reinvested. Ships may outlive the depreciation calculation. But they usually do not outlive the life expectancy by much and the residual value is often nothing to brag about. Therefore, despite common wisdom, the partnership price should decrease each year as investors receive the depreciation in cash. However, usually, the partnership price ignores aging fleets to a significant extent until problems arise (as happened with Teekay Offshore).

Therefore, the investment strategy would be to invest in partnerships with young fleets while selling those partnerships with average or older fleets (depending on the risk profile of the investor with the cash). This takes advantage of that market anomaly. The investor can exit the investment before the market realizes there is a problem. This strategy can be complicated somewhat by the cycles of the stock market and the shipping market. Hence there is a need to be conservative and risk-averse.

This partnership currently appears to be in decent enough financial shape to appeal to a wide variety of investors. The young fleet and the generous distribution should appeal to many. The fleet is young enough that the investor "can get away with" spending that tax-free "return of capital" part of the distribution.

The tangible evidence of growth prospects is shown above. Many of these ships are not built without a charter. That minimizes the risk of building these ships considerably.

Growth will be in lumps because the partnership is small. So the drop-down of ships will materially change cash flows and profits (as well as distributions). However, it would be reasonable to expect long-term growth of 6% on average. When this is combined with the current distribution of 10%, then the total return exceeds many faster-growing stocks with higher risk and less certain returns. Such a combination in an income vehicle is very rare but also very good.

I analyze oil and gas companies and related companies like Knot Offshore Partners in my service, Oil & Gas Value Research, where I look for undervalued names in the oil and gas space. I break down everything you need to know about these companies - the balance sheet, competitive position and development prospects. This article is an example of what I do. But for Oil & Gas Value Research members, they get it first and they get analysis on some companies that is not published on the free site. Interested? Sign up here for a free two-week trial.

Long Player
15.82K Followers
Author of Oil & Gas Value Research
Get analysis on under followed Oil & Gas companies with an edge.
I am a high school teacher for a decade. Before that I was an analyst (operations and financial) and for a short time a Controller I have a B.S. with an emphasis in Accounting and an MBA (for which I studied Finance, Economics, and Management) I passed the CPA exam on the first try and am a retired CPA in the state of Maryland. I have a high school teaching credential and an MA in Math Education

Disclosure: I am/we are long KNOT. I wrote this article myself, and it expresses my own opinions. I am not receiving compensation for it (other than from Seeking Alpha). I have no business relationship with any company whose stock is mentioned in this article.