Several years later, here we are, and oil is in the midst of yet another correction. Oil stocks are doing even worse. The SPDR S&P Oil & Gas E&P ETF (XOP) is down nearly 40% from its 2018 high and nearly 70% off its 5-year high. 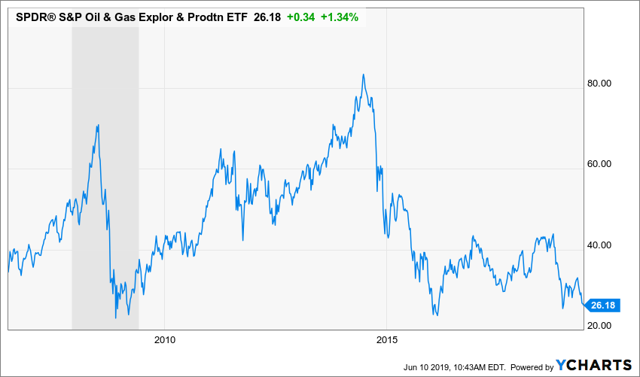 What is causing this carnage? Is it really the end of the oil age? Are there other factors at work. What can we expect over the next several years?

A Paradigm Shift Away From Fossil Fuels

For decades, it has been thought there would be a major shift away from fossil fuels. The early concerns weren't climate change, though. We feared of oil and gas shortages. The answer to American energy concerns was sold to us as nuclear energy.

The nuclear energy age in the United States, though significant, never really took off the way envisioned. Nuclear power generation peaked at 20% of energy use and has been roughly flat for over a decade. The nuclear trend is now turning down as only one new plant has come online in 23 years. 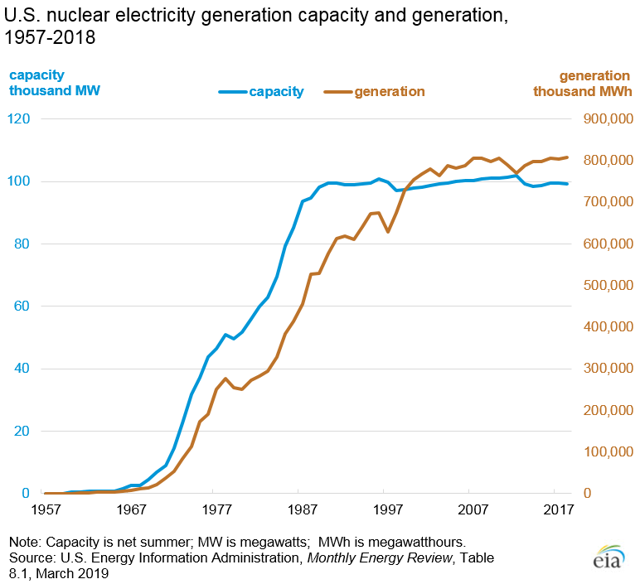 Despite nuclear not expanding for years, fossil fuels have also shown little net growth in use. As coal has declined, oil and gas have barely offset its use. Flat energy demand has been a culprit there. 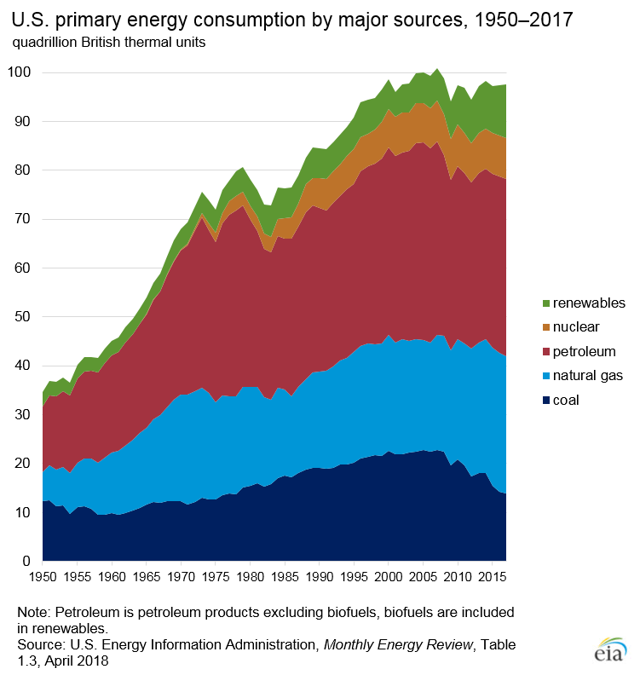 According to the EIA STEO, "Wind, solar, and other nonhydropower renewables together provided about 10% of electricity generation in 2018. EIA expects they will provide 11% in 2019 and 13% in 2020." That trend is unmistakable. 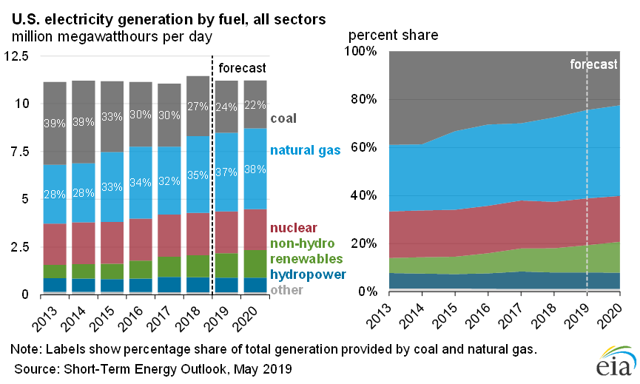 There can no longer be any doubt that a decline in fossil fuel use has begun. How fast the decline will be is another matter. I discussed my outlook in an article titled Tony Seba, EVs, Solar And $25 Oil.

In summary, I believed Seba was compressing the timeline that fossil fuels, especially oil, would be phased out. I felt he was much too aggressive. He feels that there will be a heavy turnover by the early to middle 2020s. I put the range at late 2020s to early 2030s. I introduced this chart sometime later: 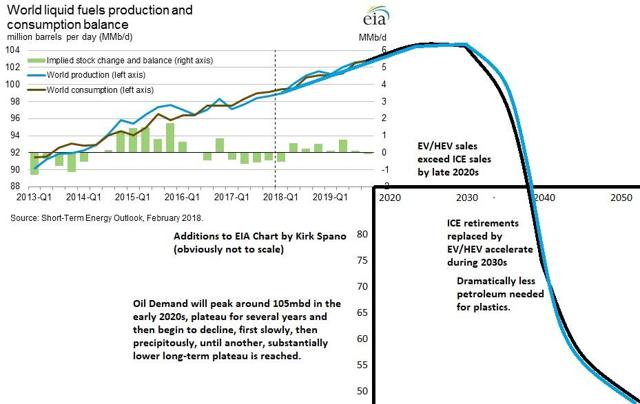 Though I am not as aggressive as Seba, I am anticipating a sharper and faster drop than most fossil fuel bulls. In particular, Exxon (XOM) and Chevron (CVX), who finance much of the anti-climate change research and oil demand projections.

President Trump threw a monkey wrench in things. First, he issued sweeping exceptions to the Iran sanctions on oil, and now, he is slowing the global economy with his no-winners trade war.

Whether the calls for a recession in 2020 are right or not, the narrative being generated by virtually every analyst and pundit is that oil demand will not rise as much this year or next as previously forecasted. That narrative is pushing oil prices and oil stock prices down in a thin market controlled more and more by traders.

I would point out there that maybe the forecasting isn't that good in either time frame, yesterday or tomorrow. If they missed in the past, why do we trust in their future outlooks? Clearly, there is a lack of understanding of what is going on.

Given that the slowing growth narrative has been the tune since April when the current slide started, I would ask this. What if it is wrong? What if we are in another new paradigm where growing global trade might not be necessary for rising GDP? What if supply chains moving makes that less of a correlation than it has been in the past? Something to think about in another piece I think.

While I believed there would be a trade deal, saying so over a year ago to expect positive Trump trade surprises, once again Trump wins in making uncertainty the flavor of the day.

I don't know if growth will slow in 2020. I think it will, but I think rising oil prices would be a catalyst for that - like it has been in the past. For now, oil languishes on pessimism.

I have a lot more to say about this subject and have another article coming. The outtake that's important here is that shale supply has ramped up quickly and, even with budget cuts this year, is going to sustain production levels.

The massive failure of shale to turn a profit has to be waking investors up by now. As I pointed out in The Dirty Dozen Oil Stocks For 2019 and Permian Pure Play Merger And Takeover Targets, there aren't many profitable oil companies.

A recent study by Rystad pointed to only 10% of shale companies having free cash flow. I had the number pegged at about 20%, but so what, either number is terrible.

The only way for oil stocks to go up in price is that shale has to stop producing more oil. That either means a wave of wildcatter bankruptcies needs to happen or the big players need to cut back. The big players aren't going to cut back.

Whether small-cap shale players go under is up to the bankers actually. Hopefully, the lack of profitability is waking up the commission and bonus happy bankers who are subsidizing the zombie companies.

If the banks really have their self-interest at heart, they'll let the unprofitable oil stocks go bankrupt now, while there is still a future for oil and the assets are worth something. Let me make this clear. The banks are better off taking assets in liquidations than anything else.

Over the past five years, the global fossil fuel divestment movement, led by 350.org, has gone from zero to over 1,000 commitments by institutions to sell nearly $8 trillion worth of fossil fuel investments. That pace is not likely to slow down.

A major harbinger happened in 2016 when a large group of the Rockefeller family divested their shares in Exxon. The statement at the time by the family was that there was "no sane rationale" to stay invested in fossil fuels as nations moved to reduce carbon emissions in response to climate change.

(Here is where I put in my regular note that it doesn't matter what you think about climate change necessarily. What matters is that governments are changing policies, and as a "pragmatic" investor, you must react to that information.)

Recently, the world's largest sovereign wealth fund hinted at plans to begin divesting fossil fuels as well. This is ironic because the fund in question is Norway's, which was formerly called "the oil fund."

Norway's SWF holds roughly $1 trillion of assets on its own. Of that, about $37 billion is in oil and gas stocks. As a first step to divesting, the fund plans to sell off about $7.5 billion of oil gas exploration and production companies.

Of the top 20 holdings in the SPDR Oil & Gas E&P ETF (XOP), every single one has been targeted for divestment by Norway, except Hess (HES). That's 19 or 20 of the top holdings have been getting sold by Norway's fund. That's monumental.

In the chart that follows, I use a simple on-balance money flow analysis to approximate the rough sales or purchasing of company stock in April, roughly since Norway started selling. All the sales are not Norway, though. Some of the selling is momentum traders and algos piling on.

I highlighted my Dirty Dozen Oil Stocks from a previous piece. Here are the 3 not in the top 20 XOP holdings:

Everybody tries to pin down the Millennial Generation. I think "disinterested" is a great word for their treatment of fossil fuel stocks. Sure, we hear about protests and movements, but from what I can tell from hundreds of interactions, most Millennials are just disinterested in oil stocks.

They are interested in tech generally, cryptocurrency, real estate, weed, eating out (makes sense after that prior one) and vacations. And, they mostly invest with ETFs. That's a big deal because straight indexes and funds holding substantial slugs of technology are where their money is going.

According to Robinhood, an investing app built on Millennials, their six most popular ETFs are:

Interestingly, I think the disinterest theme plays out in the S&P 500 ETFs. Why invest in those unless you are uninterested in finding better investment options? Apparently, The Only ETF You Need To Start Investing wasn't enough. 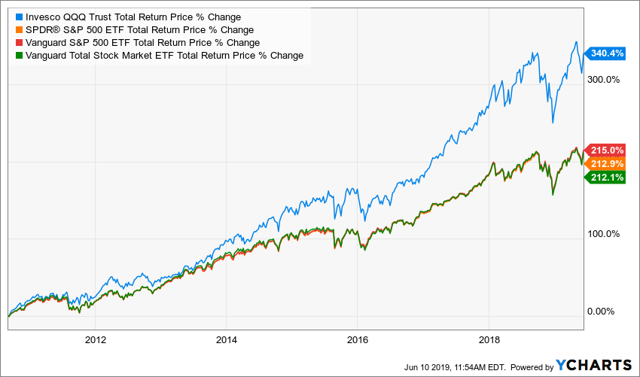 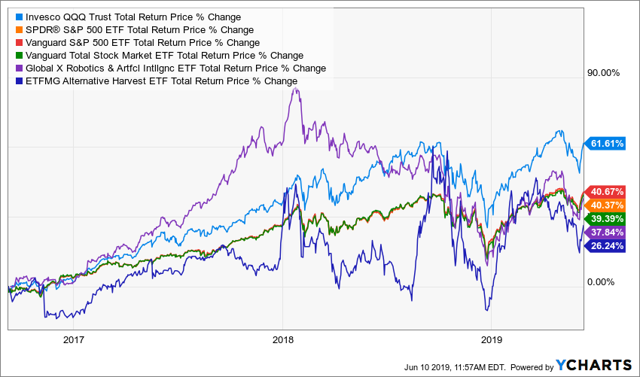 A Bull Market In Oil Is Still Coming - Maybe

I thought that about a year-and-a-half ago the last secular oil bull market had begun. I was wrong. I am less sure of a bull market in oil than I have every been. Not because the fundamentals don't scream out a bull market should happen, but because of all the reasons above - especially the crap management across the oil companies and their bankers.

The bull market should happen for several reasons. First, capital spending on long cycle oil projects not only crashed but never rebounded. I said this would happen in the much criticized Deep Water Drillers Are Doomed Even If Oil Prices Surge when I said to short Transocean (RIG) and Seadrill (SDRL). 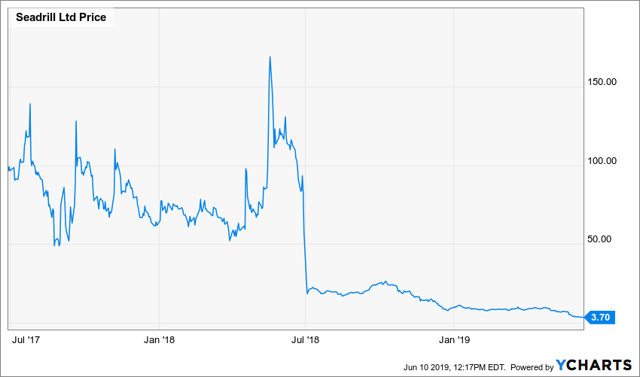 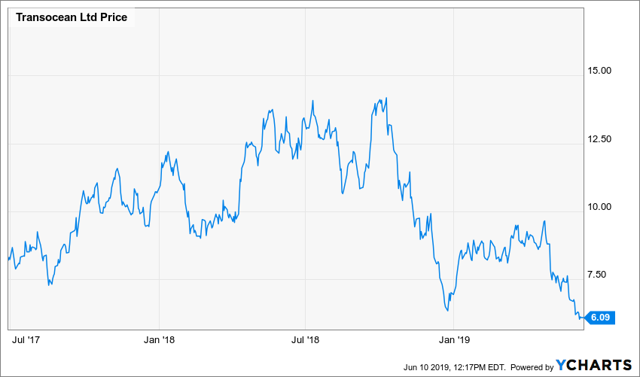 Let those be a notice of the risk in oil stocks.

Second, oil demand, even though the curve is flattening, is still rising gently.

Third, the high-grading of oil shale fields becomes less effective by the month as easier and cheaper to find oil is deplenished.

Fourth, the environmental movement is effectively making it harder to drill for oil and build infrastructure. See Colorado. See that the XL Keystone pipeline, which would mostly free us from OPEC, still isn't built.

What could be the spark for a recovery in oil and oil stocks? Bankers waking up would be good. More strife in the Middle East would be bad for the world but drive oil prices up. A trade deal with China. Surprising GDP growth (it could happen). Aliens landing that ask for oil to get back home?

Build a Margin of Safety into your investing process in this changing and sometimes dangerous world.

Benefit from insights and research by Kirk Spano, Dividend Sleuth and David Zanoni.

For up to date focus lists and ongoing asset allocation modeling, join our growing group of mindful investors.

I publish the Margin of Safety Investing letter on Seeking Alpha. You’ll find asset allocation with my Global Trends ETF portfolio, growth & dividend stocks with at least 3x total return potential and what might be the best retirement income generation service on the web using option selling to add extra income on top of your dividends.

Disclosure: I am/we are long ECA, PXD, CDEV, CHK, DVN, OXY, WTI, PE. I wrote this article myself, and it expresses my own opinions. I am not receiving compensation for it (other than from Seeking Alpha). I have no business relationship with any company whose stock is mentioned in this article.

Additional disclosure: I own a Registered Investment Advisor, Bluemound Asset Management, LLC, but publish separately from that entity for self-directed investors. Any information, opinions, research or thoughts presented are not specific advice as I do not have full knowledge of your circumstances. All investors ought to take special care to consider risk, as all investments carry the potential for loss. Consulting an investment advisor might be in your best interest before proceeding on any trade or investment.