Last week, I touched on six undervalued Dividend Champions - that article can be read here. This week, I was able to find three undervalued Dividend Contenders. These are well-known companies that offer above-average dividend growth with low-to-moderate risk for the foreseeable future. Each company listed below has its own issues which it will need to address in the coming months and possibly years. If you as an investor have a long-term horizon, these companies are worth investigating further beyond what I touch on here to see if the stock fits your investment profile and risk level.

(Source: Self, created using data from the CCC list)

AmerisourceBergen Corporation is one of the leading pharmaceutical distribution companies in the world. ABC has raised its dividend for the past 14 years landing it in the Dividend Contenders group. This company was almost acquired last year by Walgreens Boots Alliance (WBA); however, no deal ever came to fruition. Recently, another report has surfaced saying Walgreens is again interested in a potential acquisition.

ABC has been consistently growing its operating income over the past 5 years. It has leveled/off dropped a little over the past couple years, but more or less still has somewhat of an upward trajectory. Additionally, its payout ratio has remained relatively stagnant over the past three and half years around 36%, leaving plenty of room for growth in the short and long term. ABC's diluted earnings per share has been rather erratic over the past 5 years and may be something to keep an eye on moving forward - if it is not consistently growing, it may be difficult to sustain above-average dividend growth.

Much like its competitors Cardinal Health (CAH) and McKesson (MKC), ABC has not received much love since the recent opioid issue has grown in the United States over the past few years. This has caused AmerisourceBergen to become undervalued based on a comparison of its current yield to its historical yield. ABC is offering a yield not seen since December 2018; but before that, it has not offered a yield this high in past 5 years, as can be seen from the chart below. 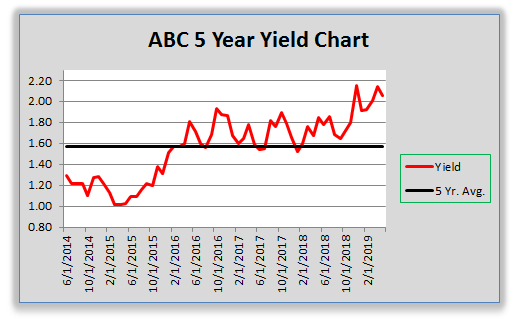 As with most yield and P/E charts, when the yield rises the P/E ratio tends to fall. The charts of ABC are no different, which, as mentioned above, is related to the opioid crisis. Since the middle of 2016, ABC's 5-year P/E chart has indicated the stock is undervalued. AmerisourceBergen should be worth considering for investment if you have a long time frame. Some issues need to be addressed between the government and drug companies and how they attempt to curb the ongoing drug issues. 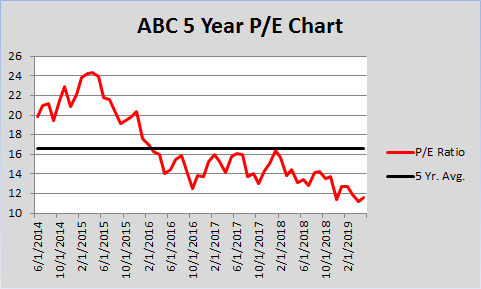 Best Buy Corp. began its reorganization in late 2012 when the now exiting CEO Hubert Joly was hired. Joly, known for his ability to take companies through restructures, essentially turned the company from a pig ready to get slaughtered to a newly functioning business focused not just on retail sales but also its Geek Squad services and a revamped online website, which now accounts for approximately 17% of the company's revenue as stated in its 2019 annual report here. Best Buy will likely be affected significantly if the tariff war continues on. While the charts below indicate being undervalued, it might benefit investors to wait out and see if the US and China issues cause the stock to drop more in the short term and a better entry point could emerge.

Best Buy's operating income growth has slowed some over the past few years but still remains positive. The company, along with many other retailers, is facing constant pressure from Amazon (AMZN) to compete on price, which is definitely something to review more in depth and on a regular basis if you intend to add BBY to your portfolio. Best Buy's payout ratio has fluctuated to as high as 50% and as low as 20% in the most recent 5-year period. This will likely continue to change as the company continues to thwart the competition through acquisitions and innovations. Earnings per share numbers have been somewhat all over for Best Buy but with a general upwards trend.

Over the past 5 years, Best Buy's yield has swung up and down past the 5-year yield average. Over the past 6 months or so, the yield has jumped above its 5-year average to a level not seen since mid-2016, 3 years ago. It's worth noting Best Buy raised its dividend 11.1% earlier this year, from $0.45 to $0.50 per quarter. While this increase may not be completed factored into the yield, the comparison below indicates it may still be undervalued. 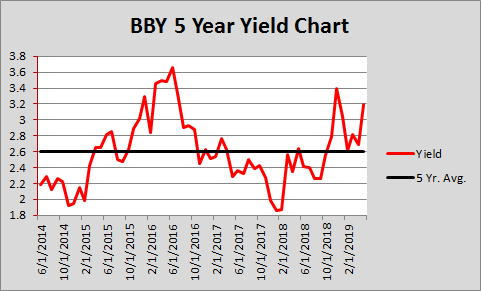 Best Buy's price-to-earnings ratio fell in late 2018 with the rest of the market. Since the bottom, the company rebounded quickly in early 2019 until the tariff issue with China began. Full-year guidance was given in the range of $5.45-5.65, with the consensus being on the higher end at $5.63. Best Buy is similar to other retailers in that the tariff issues are going to potentially hurt the company's bottom line until it's resolved. This is something to keep an eye on moving forward, because I believe once an agreement is reached, many of the retailers affected by the tariffs should rebound. 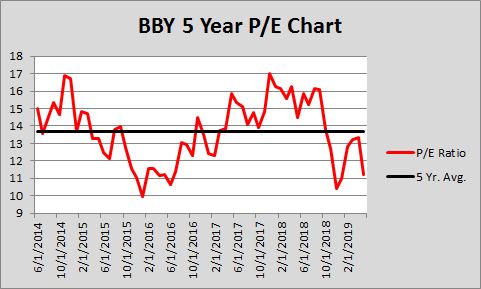 The TJX Companies is one of my favorite stocks, as the company is very shareholder-friendly. It operates stores which sell household items, clothes and many other items in the United States, Canada and some European countries.

TJX has been growing its operating income over the past 5 years, and in turn, its earnings per share has climbed almost exactly the same with it. The payout ratio has increased as well, but that is due to the tremendous dividend growth. Its payout ratio is just above 30%, with its 5-year dividend growth rate at more than 20%. TJX is probably best positioned out of the three to continue to see relatively rapid growth. The only major concern is the tariff issues between the United States and China. This will likely affect the company in the short term, but over the long haul, consistent earnings growth and profitability should remain high.

TJX's yield has been well above its 5-year average for quite a few years now. Most recently, the company raised its dividend 18%, which was just paid last week, on June 6th. TJX is also affected by the tariffs, which has caused the stock to sink recently as well, which is why you see the jump in yield at the end of the chart. 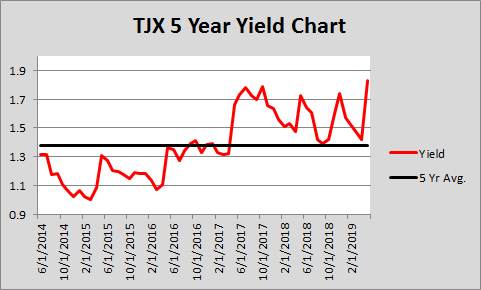 The company's price-to-earnings ratio has fluctuated a lot in the past one and a half years. Prior to that time, its P/E ratio remained relatively close to its 5-year average and currently sits close to it too. Until recently, TJX showed a fairly consistent P/E ratio until the tariff issues were raised. Once an agreement is reached, the company should return to its normal self and offer investors high long-term returns. 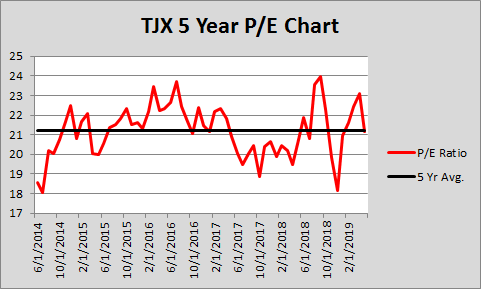 Each of these companies comes with its own uncertainty - related to the ongoing tariff issue for two of them and to the ongoing opioid issue in the United States for one of them. Best Buy actually has two issues - the aforementioned tariff issues and Amazon. While the retail end will likely be difficult going forward, it would be beneficial for Best Buy to expand its Geek Squad services as a way to offset the threat of Amazon. Ultimately, I believe the issues of these three companies are relatively short-sighted, and if you have a long-term horizon, buying any three of these companies while on a dip should help to minimize your risk long term.

These charts are for information purposes only, and each individual investor's situation is different. You should conduct your own due diligence before making an investment in these or any company.

Seeking Fair Value
592 Followers
I research dividend growth stocks on a consistent basis and want to initiate or expand my position in them at opportune times.

Disclosure: I am/we are long TJX. I wrote this article myself, and it expresses my own opinions. I am not receiving compensation for it (other than from Seeking Alpha). I have no business relationship with any company whose stock is mentioned in this article.