Germany and Italy are, of course, part of the Euro, the whole point of which is that they cannot, individually, "manipulate" their currencies, whatever that means. It is precisely this inability to devalue - to "manipulate" the Drachma to regain "competitiveness" (another meaningless term) - that conventional wisdom bemoaned of Greece.

I had a little chuckle, envisioning some frustrated mid-level Treasury economist bemoaning the trade and currency idiocy floating around Washington, putting this little message in a bottle to see if anyone noticed the reductio ad absurdum. If so, hello there, somebody noticed.

But then read the report.

It is shocking. It's supposed to be about "currency manipulation." The statutory mandate is clear (p. 3):

Under Section 3004 of the 1988 Act, the Secretary must: "consider whether countries manipulate the rate of exchange between their currency and the United States dollar for purposes of preventing effective balance of payments adjustments or gaining unfair competitive advantage in international trade."

Whatever "unfair competitive advantage" means - remember, trade is trade, not a basketball game, and only is done if it benefits both parties - this sounds pretty clear: it's about currencies. If you don't have a currency, you can't manipulate it. The additional statutory guidance quoted on p. 3 also all ends with "currency."

This minor technicality will no longer constrain our Treasury, in its desire to dictate trade. In big bold letters on p. 2:

"Starting with this Report, Treasury will review and assess developments in a larger number of trading partners in order to monitor for external imbalances and one-sided intervention."

(Just what is a "two-sided intervention?" Exchange rates that go both up and down?) More specifically,

Beginning with this Report, Treasury will assess all U.S. trading partners whose bilateral goods trade with the United States exceeds $40 billion annually.

Bilateral trade "deficits" are meaningless. China sends us shoes, Australia sends China coal, the US sends Australia airplanes. Pieces of paper flow the other way. We all come out ahead despite three bilateral "deficits." (In quotes as this is a horrible word too, implying something is deficient every time you go to the Starbucks and suffer a coffee trade "deficit." )

Bilateral goods deficits are even more meaningless. Italians send us prosciutto (goods), we send them software (services), and this is somehow a problem reflecting "currency manipulation?"

Italy recorded a current account surplus of 2.5 percent of GDP in 2018, while its goods trade surplus with the United States rose to $32 billion.

Aha, Italy, that dynamic powerhouse, is growing exponentially, at the expense of all those unemployed pasta makers in Appalachia, because it somehow devalued its corner of the Euro?*

Italy should be running big trade surpluses. That is the only way it will pay down its vast foreign debt. If Italy were running trade deficits, we should worry.

Here is the whole table of "criteria." 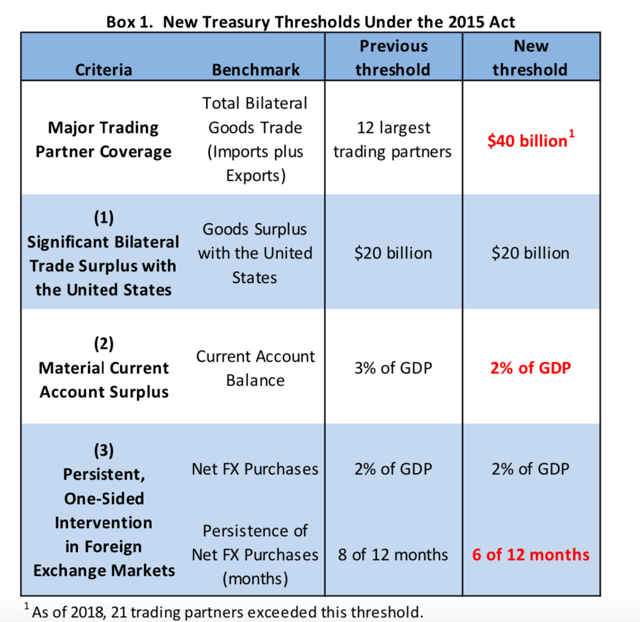 And thus, we get to the madness that a country without its own currency can be accused of its manipulation.

My secretly sane economist at the Treasury did, then, sneak in a pretty good description of Italy's problems:

Yes. But "fiscal and external sustainability" is not about recycling your Gucci bags. It means running trade surpluses with which to pay down debts! This report now flatly contradicts itself. Then, in case you need banging over the head about how there cannot be a whiff of manipulation here,

The ECB has not intervened unilaterally in foreign currency markets since 2001.

A phrase repeated poetically regarding the other suspect countries, Ireland and Germany.

I called this post "institutionalized nonsense." Yes, every president brings to his (or, someday, her) administration some nutty ideas, some campaign rhetoric that does not correspond to cause-and-effect reality. Sensible cabinet secretaries and career staff must indulge the rhetoric.

But by this document the Treasury is institutionalizing nuttiness - setting up rules and procedures that monitor bilateral goods "deficits," and waste our Nation's vanishing prestige haranguing countries about their "macroeconomic policies" that produce such undefined and ill-measured ephemera. Why listen to us on, say Iran sanctions or Tiananmen square if we are going to indulge in this sort of nuttiness?

Meanwhile, the administration continues to badger the Fed to lower interest rates in order to... well, to manipulate our currency!

*Note to the humorless: I don't mean to disparage Italy, actually the home of excellent small manufacturers. Also, if Italy does introduce MiniBots, or go off the Euro, then the fun might really begin. But the Treasury report is not about this. Next post.

Update: Tim Worrstall and Don Boudreaux cover the same report. Tim points out that the US runs bilateral goods trade surpluses with lots of countries, who by rights should be accusing us of "currency manipulation"

So, by the new US rules Holland, Hong Kong and Belgium should be declaring the United States a currency manipulator and imposing corrective tariffs to compensate, should they? You know, sauce for goose, sauce for gander. And if you're not willing to use the same criteria then you'd better have a damn good explanation why.

Don concludes that "we Americans are today governed by imbeciles." I guess I am a little optimistic in my view that by making it so ridiculous - by including countries on the euro - some small point of light at Treasury was making fun of the whole mess.

John Cochrane
656 Followers
John H. Cochrane is the AQR Capital Management Distinguished Service Professor of Finance at the University of Chicago Booth School of Business. His recent finance publications include the book Asset Pricing, and articles on dynamics in stock and bond markets, the volatility of exchange rates, the term structure of interest rates, the returns to venture capital, liquidity premiums in stock prices, the relation between stock prices and business cycles, and option pricing when investors can’t perfectly hedge. His monetary economics publications include articles on the relationship between deficits and inflation, the effects of monetary policy, and on the fiscal theory of the price level. He has also written articles on macroeconomics, health insurance, time-series econometrics and other topics. He was a coauthor of The Squam Lake Report. He writes occasional Op-eds, and blogs as “the Grumpy Economist” at johnhcochrane.blogspot.com. Cochrane is a Research Associate of the National Bureau of Economic Research and past director of its asset pricing program, a Senior Fellow of the Hoover Institution at Stanford University, and an Adjunct Scholar of the CATO Institute. He is a past President and Fellow of the American Finance Association, and a Fellow of the Econometric Society. He has been an Editor of the Journal of Political Economy, and associate editor of several journals including the Journal of Monetary Economics, Journal of Business, and Journal of Economic Dynamics and Control. Recent awards include the TIAA-CREF Institute Paul A. Samuelson Award for his book Asset Pricing, the Chookaszian Endowed Risk Management Prize, and the Faculty Excellence Award for MBA teaching. Cochrane currently teaches the MBA class “Advanced Investments” and a variety of PhD classes in Asset Pricing and Monetary Economics. Cochrane earned a Bachelor’s degree in Physics at MIT, and earned his Ph.D. in Economics at the University of California at Berkeley. He was at the Economics Department of the University of Chicago before joining the Booth School in 1994, and visited UCLA Anderson School of Management in 2000-2001. In addition to research and teaching, Cochrane is a competition sailplane pilot and windsurfs. He lives in Chicago with his wife Elizabeth Fama and children Sally, Eric, Gene and Lydia. For more information, please see Cochrane’s website, http://faculty.chicagobooth.edu/john.cochrane/
Follow
3 Comments