We've covered AQR's eponymous managed futures product before, asking in April of 2017: What's Wrong with AQR and again in March of 2019: What's Wrong with AQR (Part II), because when you're the elephant in the room, well - people want to know what if you're playing nicely or shattering the dinnerware. And, well, when you've literally lost more assets (about $9 billion) than all but a few shops have ever even managed, well - it begs the question of what is happening. 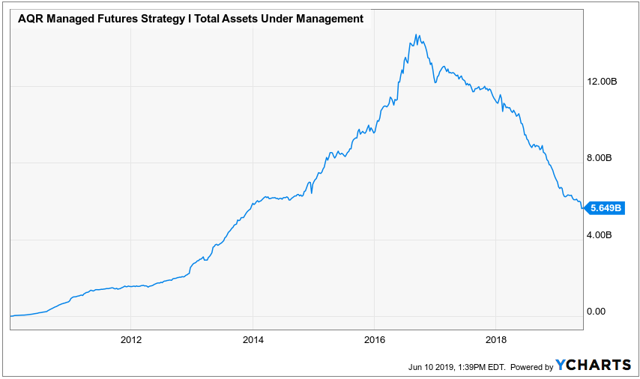 You have to Perform

The quick and dirty answer is that you have to perform. Both the fund itself, and the fund category! You have to look good on both an absolute and a relative basis. AQR is lacking across all of these. For starters, it has lost about a quarter (-24% drawdown) of its equity peak from April of 2015 (absolute return fail). Of course, assets in the fund peaked about a year later as investors chased performance. Next, it is essentially flat over the past 5 years (absolute return fail), while the S&P has returned about 46% over that same time.

And finally, perhaps most importantly of all, it hasn't been able to outperform its peers. Our proprietary ranking model measures alternative investments in both private fund and mutual fund wrappers, and has AQR's managed futures mutual fund AQMIX with a ranking of just 1 star out of 5, finding it in the bottom quintile of our rankings (which consider risk adjusted returns and time weighted statistics). Said another way, when comparing AQMIX across multiple time frames, return metrics, and risk measures - 4 out of 5 programs in our database rank better than it. Here's a YCharts chart again showing that graphically, with AQR plotted versus Goldman (GS), Natixis (OTCPK:NTXFF), and Pimco's managed futures offerings. They are all losing the war, as well, with the overall asset class suffering as volatility has gone on an extended vacation, but they are winning the battle vs. AQR in terms of relative out performance, with double-digit returns over the past five years while AQR is in the red.

Why is it underperforming its peers? Well, again, that size factor is definitely an issue, with AQR unable to participate in a meaningful way in markets that have moved this year (like Hogs and Corn). Their footprint also can make market impact an issue, bringing to light the need for everyone to use automated execution algorithms as a new best practice. And it can't be easy to have to unwind $9 billion of positions without negatively impacting the one's you still hold. What we also see, however, is a weird sort of volatility profile where AQR tends to mirror the vol of its peers on the downside, but have less volatility on the upside. Meaning they all tend to lose about the same, but when they are all winning, the others are winning more. Everyone else tended to do better in the slow crawl upwards of 2017, perhaps pointing to a long bias among others? But if that's the case, then why was there another divergence during the big stock sell off in December 2018, where AQR didn't capture as much of the down move in US stocks as the others? Maybe/probably a little bit of all of the above is happening.

Now, there's still $5 billion in the program, which is nothing to shake a stick at, and which may help them get back on solid footing. But there're still better choices out there for our dime, mainly in the private fund space, but some in the mutual fund areas as well.

The performance data displayed herein is compiled from various sources, including BarclayHedge, and reports directly from the advisors. These performance figures should not be relied on independent of the individual advisor's disclosure document, which has important information regarding the method of calculation used, whether or not the performance includes proprietary results, and other important footnotes on the advisor's track record.

Benchmark index performance is for the constituents of that index only, and does not represent the entire universe of possible investments within that asset class. And further, that there can be limitations and biases to indices such as survivorship, self-reporting, and instant history.

Managed futures accounts can subject to substantial charges for management and advisory fees. The numbers within this website include all such fees, but it may be necessary for those accounts that are subject to these charges to make substantial trading profits in the future to avoid depletion or exhaustion of their assets.

Investors interested in investing with a managed futures program (excepting those programs which are offered exclusively to qualified eligible persons as that term is defined by CFTC regulation 4.7) will be required to receive and sign off on a disclosure document in compliance with certain CFT rules. The disclosure documents contain a complete description of the principal risk factors and each fee to be charged to your account by the CTA, as well as the composite performance of accounts under the CTA's management over at least the most recent five years. Investors interested in investing in any of the programs on this website are urged to carefully read these disclosure documents, including, but not limited to the performance information, before investing in any such programs.

Those investors who are qualified eligible persons as that term is defined by CFTC regulation 4.7 and interested in investing in a program exempt from having to provide a disclosure document and considered by the regulations to be sophisticated enough to understand the risks and be able to interpret the accuracy and completeness of any performance information on their own.

RCM receives a portion of the commodity brokerage commissions you pay in connection with your futures trading and/or a portion of the interest income (if any) earned on an account's assets. The listed manager may also pay RCM a portion of the fees they receive from accounts introduced to them by RCM.

See the full terms of use and risk disclaimer here.

Jeff Malec
697 Followers
Jeff Malec is the CEO and founding partner of Attain Capital Management (www.AttainCapital.com) - a commodity futures brokerage and research firm specializing in managed futures investments through individually managed accounts and privately offered funds. Please read the important disclaimer regarding managed futures below: Disclaimer: Composite performance records are hypothetical in nature, and the trading advisors have not traded together in the manner shown in the composite. Hypothetical performance results have many inherent limitations, some of which are described below. No representation is being made that any multi-advisor managed account or pool will or is likely to achieve a composite performance record similar to that shown. In fact, there are frequently sharp differences between a hypothetical composite performance record and the actual record subsequently achieved. One of the limitations of a hypothetical composite performance record is that decisions relating to the selection of trading advisors and the allocation of assets among those trading advisors were made with the benefit of hindsight based upon the historical rates of return of the selected trading advisors. Therefore, composite performance records invariably show positive rates of return. Another inherent limitation on these results is that the allocation decisions reflected in the performance record were not made under actual market conditions and, therefore, cannot completely account for the impact of financial risk in actual trading. Furthermore, the composite performance record may be distorted because the allocation of assets changes from time to time and these adjustments are not reflected in the composite. Forex trading, commodity trading, managed futures, and other alternative investments are complex and carry a risk of substantial losses. As such, they are not suitable for all investors. Unless distinctly noted otherwise, the data and graphs included herein are intended to be mere examples and exhibits of the topic discussed, are for educational and illustrative purposes only, and do not represent trading in actual accounts. The mention of asset class performance is based on the noted source index (i.e. Newedge CTA Index, S&P 500 Index, etc.), and investors should take care to understand that any index performance is for the constituents of that index only, and does not represent the entire universe of possible investments within that asset class. And further, that there can be limitations and biases to indices: such as survivorship and self reporting biases, and instant history. Past performance is not necessarily indicative of future results. The regulations of the CFTC require that prospective clients of a managed futures program (CTA) receive a disclosure document when they are solicited to enter into an agreement whereby the CTA will direct or guide the client's commodity interest trading and that certain risk factors be highlighted. The disclosure document contains a complete description of the principal risk factors and each fee to be charged to your account by the CTA.
Follow
To ensure this doesn’t happen in the future, please enable Javascript and cookies in your browser.
Is this happening to you frequently? Please report it on our feedback forum.
If you have an ad-blocker enabled you may be blocked from proceeding. Please disable your ad-blocker and refresh.