Vical (VICL) is a failed biopharmaceutical company which discontinued operations in February 2019 to seek strategic alternatives. On June 3rd, Vical announced the proposed merger with Brickell Biotech which values Vical at $40m but the market did not respond favorably to the announcement and Vical is now trading at only a $19m market capitalization or a 110% discount from the valuation implied by the merger. Vical's most recent quarterly filing from May 2nd, 2019 listed equity at $43.922m of which $45.531m is in cash and marketable securities. By taking a look at potential cash burn, severance liabilities, and the BVF outstanding warrants my estimate for liquidation value is around $1.24 per share or a 51% return from current prices of $0.82.

We'll take a look at each of the following pieces in turn: the proposed merger agreement, liquidation valuation, major owners of Vical and hypothesized motivation, and possible outcomes.

The key details for the merger agreement can be found here. The agreement is a share only transaction where if approved Vical shareholders would own 40% of the combined company and Brickell shareholders would own 60%. After closing the combined company would become focused exclusively on the dermatological products that Brickell is pursuing. This is categorically different from 'the prevention and treatment of serious or life-threatening diseases' which Vical focused on and as such suggests to me that this reverse merger is merely a vehicle for Brickell to gain access to the public markets and more importantly the cash that Vical has. Another thing reinforcing this perspective is that none of Vical's executives are moving on to Brickell and only two out of the seven directors for the board will be selected by Vical.

I'm not going to get into an analysis of the prospect of Brickell as a company because it's not within my circle of competence though I'd love to hear from others more knowledgeable. Yet, if the prospects were good I would expect that Vical would not be trading at such a discount to its cash position after the deal was announced. Predominantly, I'm fascinated by what seems to be a clear inefficiency which could be exploited by rejecting the proposed merger and voluntarily liquidating instead. Shareholders who see value in this merger should of course vote in support of it.

Vical did a conference call as part of the announcement (which you can find a transcript of here) where CEO Vijay Samant stated that they 'evaluated the potential of more than 50 private and public merger partners with extensive due diligence conducted on a large subset of these potential merger partners'. This is an important detail because it seems to suggest that the option of voluntarily liquidating the company was not considered even as it may be the best alternative for current shareholders. Given that the intellectual property of Vical seems to be assigned no value in this deal it seems odd to me that the best course of action would be to distribute the cash to Brickell rather than distribute the cash to current shareholders. Again, unless you see value in Brickell.

Let's look for a second at the fees if the merger is rejected. Termination fees for the merger are $1m but only in certain circumstances. The circumstances of shareholders rejecting the merger are covered in Section 9.1d of this document where 'the Parent' is Vical and 'the company' is Brickell. 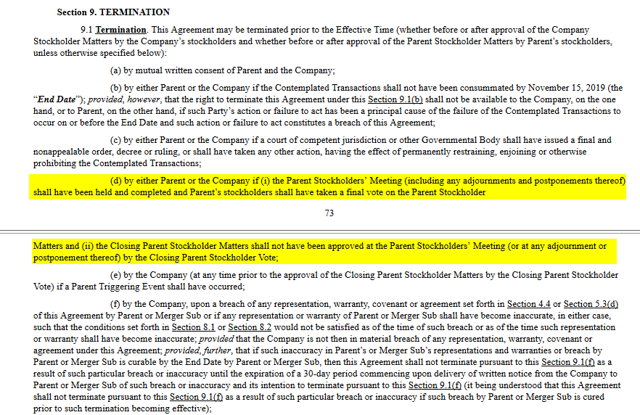 Notably if you go on to read section 9.3, there are only two scenarios that I'm seeing where Vical, or 'the Parent', must pay the $1m fee which I've highlighted below. And neither of those are the scenario where shareholders reject the merger. 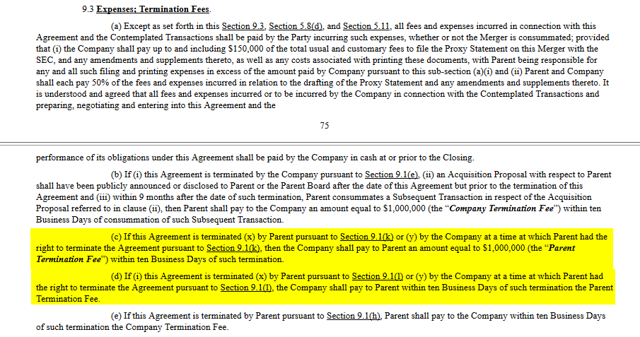 Here are my estimates for liquidation value based off of the last quarter's filings.

Source: Author's calculations.*The warrants are all owned by BVF and I'll discuss these in more detail below

This is an 'initial liquidation value' because there are a few key variables.

From what I can tell the cost of liquidation ought to be minimal given how simple the balance sheet already is. The formal dissolution of a company can be done in 6-8 weeks after a decision by the board and shareholders to do so. I'm estimating a range of $1-2m of additional cash burn for the liquidation itself and ongoing expenses. Which leads to my estimated liquidation value between $35.522m-36.522m

Any further clarity anyone can get on any of the three variables above would definitely sharpen the analysis here. Even if the liquidation value drops all the way to $30m this would still translate to 58% upside from current market capitalization excluding the warrants.

But let's talk about the warrants for a second as they've come up in previous discussions of Vical and are an important variable to consider as well. Biotechnology Value Fund (BVF) owns the rights to 6.2m of pre-funded warrants which are immediately exercisable at $0.01 (you can find the prospectus here). These warrants have a provision preventing the owner from exceeding 9.99% ownership upon exercise. Biotechnology Value Fund is already a 9.99% owner so therefore cannot exercise these warrants further. With that said, it seems that the warrants are transferable and therefore could be purchased and subsequently exercised by someone else with less than 9.99% ownership. This result seems likely to me in the scenario where the merger is voted down as BVF would be looking to monetize these to the best of their ability.

Going on that assumption, fully diluted outstanding shares would jump to 29m. My estimated liquidation values above would translate to $1.22-$1.26 and an upside potential of 48%-54%.

Major Owners Of Vical And Motivations

Let's investigate if it's possible to reject the merger through a shareholder vote. First, let's look at insider ownership.

Given low insider ownership it's clear that they alone will not be able to push the vote through. So let's look at institutional ownership.

Biotechnology Value Fund is likely to vote in support of the merger because from my reading their warrants convert over to the combined company and would become exercisable again as they would not be 9.99% owners of the new company.

Sio Capital Management seems to be incentivized to vote against the merger as they accumulated shares between August 2018 and February 2019. Their website characterizes their investment style as value-oriented and that they are 'looking for opportunities to find a dollar we can buy for 50 cents'. Given current levels and potential upside they are in a position to exploit this inefficiency by buying more shares here and rejecting the merger. Unless of course they see significant value in Brickell.

Renaissance Technologies is a famous quantitative outfit so they likely will not be overly involved. But again, given the market's reaction to the reverse merger, it may be in their interest as well to vote against the reverse merger.

A wildcard I'd note is Armistice Capital who at one point was a ~19% owner but sold their position in January 2019 at a price of $0.88, only a month before Vical discontinued operations. There's an opportunity for them to buy back in as well and exert influence here to capitalize on this inefficiency especially given their prior knowledge of the company.

But this is all just speculation and we will have to see what happens. Given the small amount of insider and institutional ownership this situation is ripe for someone to come in and exploit the inefficiency. All this means that 73% of other holders of this stock can easily influence what happens next.

On the other hand, if shareholders vote to reject the merger there are a few possibilities. The voluntary liquidation path is one way to look at this and I focused on it given that I was able to quantitatively estimate the value of Vical in that scenario. In order for voluntary liquidation to happen, the board would have to approve a dissolution plan which shareholders would then have to approve (for an ongoing example of this consider Altaba). Vical could continue to explore strategic alternatives and may do so if there is no formal activist involvement pushing for a specific outcome like voluntary liquidation.

If there is pressure from an activist campaign this situation may cause other action before the vote even occurs. For example, if it seems possible that the reverse merger would not be supported by shareholders Brickell may attempt to offer better terms. Or one of the other 50 suitors investigated may jump in with a better deal as well given the market's reaction to the Brickell announcement. Or someone new may appear and make an offer.

The reality is that at current levels, Vical is a $35m piggybank on sale for $19m and shareholders are equipped with a hammer in the form of a vote to bust this open. It's a rare moment of clear inefficiency in the market which seems unlikely to stand for any significant amount of time especially given the lack of severe consequences of rejecting the merger proposed with Brickell.

Ryan Bowen
575 Followers
Author of Microcap Review
Analysis of underfollowed microcaps worldwide, plus arbitrage and net-nets
I am a self-taught value investor sharing my journey here and Contributing Writer to Microcap Review where you can subscribe and receive exclusive research.

My first objective is to not lose money and I seek to do this through investing in names I can define a discernible margin of safety. My second objective is to generate above average returns through large position sizing in my highest conviction ideas.

Always open to questions and dialogue as I believe it can only serve to improve all of us.

Disclosure: I am/we are long VICL. I wrote this article myself, and it expresses my own opinions. I am not receiving compensation for it (other than from Seeking Alpha). I have no business relationship with any company whose stock is mentioned in this article.

Additional disclosure: I was long before the reverse merger so am incentivized to see prices appreciate.