Shares of Denali Therapeutics (NASDAQ:DNLI) have risen by only 5% since its December 2017 IPO was priced at $18 per share. Year to date, the stock is in the red by about 8%.

Given my rekindled interest in the Parkinson space and desire to have more names on the radar that could achieve proof of concept relatively soon, I listened to management's presentation at Jefferies and was convinced this one deserves more attention.

When looking at charts, clarity often comes from taking a look at distinct time frames in order to determine important technical levels to get a feel for what's going on. In the above chart (daily advanced), we can see the stock slide in Q3 2018, then gradually rise in Q1 2019 due to progress made in the clinic and with collaborations. After peaking in April, the stock has pulled back significantly to levels that prior served as support (perhaps presenting a solid buying opportunity).

In CEO Ryan Watt's presentation at Jefferies, he starts by acknowledging the risky nature of the neurodegenerative disease space while highlighting the company's step-wise approach to eliminating some of that risk. Denali Therapeutics has two clinical stage programs (3 molecules in the clinic), with perhaps the most well-known one being its LRRK2 inhibitor (targets gene mutated in Parkinson's disease and, in some cases, is causative). A phase 1 biomarker-focused trial is currently being enrolled, and a backup program is also in the clinic.

One under the radar program is ETV:IDS (enzyme transport vehicle for iduronate 2-sulfatase), whose goal is to get enzymes across the blood-brain barrier. Management has done a solid job of creating a very broad platform with multiple shots on goal, including the Takeda (TAK) partnership for three TV Platform programs. 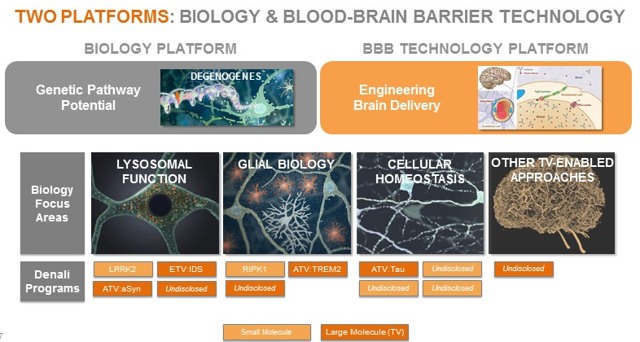 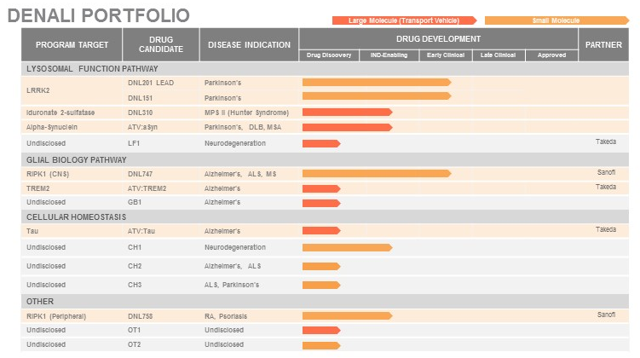 Slide 5 is quite striking, showing relatively little in the way of novel genetic insights until a few years after the turn of the century when a bevy of new therapeutic targets and pathways were uncovered. The company's lofty goal is translating these insights into medicines that work (one fraught with much risk but imagine the reward for these patients should a product candidate make it across goal line).

Moving on to the LRRK2 program, note that this gene was discovered in 2004 and has been demonstrated to be a central pathology of Parkinson's (leads to protein aggregation and death of dopaminergic neurons). The goal of the program is to bring levels back to normal and reverse lysosomal dysfunction (has been achieved in human cell lines). PK data has shown ideal exposure in both brain and periphery and for drug candidate DNL201 dose-dependent inhibition of LRRK2 was shown in a phase 1 healthy volunteer study.

Patient studies are now underway (enrolling both mutation carriers and idiopathic Parkinson's disease), and the objective is to confirm target engagement, assess pathway engagement, and utilize biomarkers to ensure they're on the right track. Keep in mind that earlier studies had originally shown some safety concerns for LRRK2 inhibitors, so despite solid healthy volunteer data, it will be important to keep an eye on safety and tolerability profile in ongoing trials.

As for the RIPK1 program, activation is increased in neurodegenerative diseases and generates a pro-inflammatory response. Inhibition enables selective inhibition of TNFR1 pathway (led to global partnership with Sanofi to advance in psoriasis, MS, and other indications). Denali continues to develop the drug candidate in ALS and Alzheimer's disease. PK data again looks good, as does target engagement even at very low levels administered.

Alzheimer's and ALS studies are now enrolling patients (patients on drug for a month, then placebo for a month, allowing for comparison of biomarkers).

Moving onto the TV platform, Watt starts by highlighting failure of large molecules in the brain (e.g. several disappointments in the Alzheimer field as with Biogen's (BIIB) aducanumab). For the sake of illustration, consider that the concentration of most therapeutic antibodies in the brain is only 0.1% of the concentration in the blood. TV platform technology engineers BBB receptor into binding into an Fc domain. Proof of concept has been achieved in non-human primates, showing 20 to 30 times increased exposure and broad distribution in the brain. Additionally, sustained pharmacodynamic effect was observed for over 10 days. Although perhaps a smaller market opportunity, positive data in Hunter Syndrome would be significant as it would validate this approach on the whole. Enzyme replacement therapies for this indication provide clinical benefit for somatic symptoms but not for CNS symptoms (consider that Shire's (SHPG) Elaprase did $634 million in 2018 sales).

As for moving this asset into clinical studies in humans, GLP toxicity studies are underway, and IND filing could take place by the end of the year (from there, go into patients and achieve biomarker validation using CSF).

Let's take a look at a few recent events that have impacted the bullish thesis.

In January, SIRION Biotech announced it'd signed a license and collaboration agreement with Denali to develop adeno-associated virus vectors to enable therapeutics to cross the blood-brain barrier for application to neurodegenerative diseases such as Parkinson's, Alzheimer's disease, and ALS. Terms of the agreement include development expenses, upfront and contingent milestone payments to SIRION Biotech plus low-to-mid single-digit royalties on net sales. This deal is important as it represents Denali's foray into the lucrative gene therapy arena. Specifically, the goal here is to create new and modified AAV capsids with greater specificity and high efficiency to deliver therapeutic levels of medicines to the brain.

In February, Denali announced initiation of dosing in the phase 1b clinical study of DNL747 in Alzheimer's disease patients (collaboration with Sanofi). The trial is relatively small, as just 26 patients will be randomized to receive DNL747 or placebo in the crossover design trial. Thus, the company is guiding for data potentially as soon as Q4 2019.

In June, Denali announced that the FDA granted Orphan Drug Designation and Rare Pediatric Disease Designation for DNL310 (ETV:IDS for mucopolysaccharidosis II). Consider that the program could provide a significant leap forward by treating neurological symptoms of Hunter syndrome and that two-thirds of these patients suffer from progressive cognitive impairment. Phase 1/2 trial is still planned for 2020 and keep in mind that two additional ERT programs incorporating TV technology are now being moved forward.

For the first quarter of 2019, the company reported cash and equivalents of $583 million as compared to net loss of $39 million. Research and development expenses rose to $37.4 million, while G&A came in at $9.3 million. Given the company's substantial cash position, I wouldn't expect further dilution until the end of 2019 at the earliest or more likely in 2020.

As for future catalysts of note, as observed below, the company is now moving into a phase during which substantial value could be created as the pipeline progresses in the clinic. Biomarker data for lead programs and initiation of mid-stage studies later on could lead to a significant upside move.

For the Sanofi collaboration, in addition to the $125 million upfront payment, Denali stands to receive $1.1 billion in milestone payments ($600 million related to CNS products and $495 million for peripheral products). Profits and losses will be shared equally for CNS products sold in the US and China, with Denali receiving royalties on net sales for CNS products sold outside that area (royalties on global net sales for Peripheral products).

For its LRRK2 small molecule program for Parkinson's disease, the company received it from Genentech (exclusive global sub-licensable license) paying just $8.5 million upfront (could owe up to $315 million in milestone payments, plus royalties on net sales from low to high single-digit percentages.

As for institutional investors of note, Crestline Management owns over 19 million shares. History of substantial insider selling does not inspire confidence.

As for the management team, CEO Ryan Watts served prior as Director of the Department of Neuroscience at Genentech. Quite a few employees came over from Genentech, including COO Alexander Schuth (director and head of Genentech's Neuroscience Partnering).

To conclude, the neurodegenerative disease space is one marked by a history of failure (especially by big pharmaceutical companies pursuing approaches that have come up empty time and again). However, smaller and more innovative firms like Denali Therapeutics and Alector (ALEC) (appeared in a prior article of mine) have taken up the torch, and I hope that they experience a major breakthrough. Key partnerships are in place, preclinical and healthy volunteer data are promising, and a logical clinical plan is in place to progress lead programs forward.

For readers who are interested in the story and have done their due diligence, I consider this stock a Speculative Buy.

For our purposes in ROTY, I'd like to wait until seeing additional data sets and proof of concept achieved to provide that element of derisking we look for.

Take your investing/trading to the next level through being part of a group known for its pursuit of profits, continuous improvement and generous sharing of due diligence & knowledge.

My primary focus is on biotech stocks with high % upside potential within the next twelve months (Runners of the Year or ROTY). These picks typically have multiple green flags, elements of derisking or downside cushion, and other criteria I look for.

Founder of ROTY (Runners of the Year), a 500+ member community of biotech investors & traders focused on the intersection of value and accelerating clinical momentum.