In an effort to create shareholder value and improve their competitive positions, both Raytheon Company (RTN) and United Technologies (NYSE:UTX) agreed the other day to merge in an all-stock transaction. This maneuver by the firms will create a massive player in the defense and aerospace market, placing them second in size among US firms, with only Boeing (BA) ahead of it. Assuming management’s own forecast for the combined firm ends up coming out right, the picture for shareholders here will be positive, for both companies, but the biggest winner, it appears, is undoubtedly Raytheon. The value created for its investors appears to be significant, and investors in the firm should find themselves enjoying the ride moving forward.

A look at the transaction

Collectively, the new firm that will emerge from this merger will be referred to as Raytheon Technologies Corp., and based on forecasts for 2019, sales will come in at $74 billion, up from the $69 billion the combined firm would have generated in 2018. Through a mixture of share buybacks and dividends to shareholders, management has said that it plans to return between $18 billion and $20 billion to shareholders in the first 36 months following completion of the transaction.

Most of this return to shareholders will happen through a mixture of internally-generated cash flow, taking on debt, and possibly (though this has not been announced) selling off assets the enterprise will no longer need. However, another contributor is sure to be the firm’s synergies. According to management, the company will be able to reduce costs (gross, not net) by more than $1 billion on a run-rate basis by the fourth year following the transaction’s completion. Interestingly, an estimated $500 million of these savings are expected to be passed on to its clients in the form of more competitive pricing. 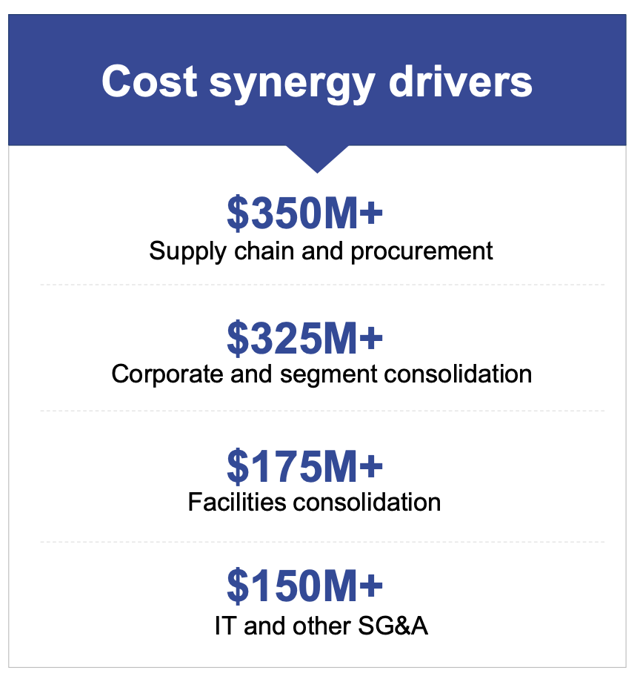 The allocation of synergies is pretty straightforward. According to management, $350 million in savings will come from supply chain and procurement improvements, while $325 million will be attributable to corporate and segment consolidation. The remaining $325 million will be split between facilities consolidation, as well as IT and other SG&A-related expenses. Though management has not made any public announcements yet, it looks to me like the vast majority of these efficiency improvements will come at the expense of rank-and-file employees being let go, which is rather unfortunate. As a result of these changes, the financial picture for the combined firm should be quite appealing over time. This year, for instance, it’s expected for free cash flow of the two entities to be $6 billion. This should grow to $8 billion per annum by 2021. 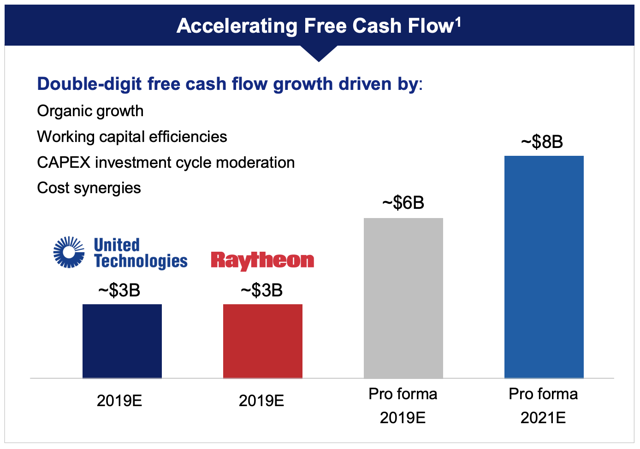 Raytheon is the clear winner here

In the event that synergies can be generated on the scale management asserts, I believe that both Raytheon and United Technologies will be in a better position following the completion of this transaction. That said, the real winners here, in my opinion, are the shareholders who own a slice of Raytheon. Yes, the company’s investors are walking away with a smaller piece of the pie (43% of the stock in the combined firm compared to United Technologies’ 57%), but a look at the numbers illustrates why this is alright.

For starters, let’s begin by looking at contribution to EBITDA. According to management, EBITDA for the combined firm should be around $13.5 billion for 2019. Of this, Raytheon is accountable for $5.4 billion, or about 40.7% of the overall number. Investors here might rightfully point out that EBITDA is not necessarily the best way to look at things from. This is due to the fact that Raytheon’s total debt is only $2 billion on a net basis. United Technologies, on the other hand, and adjusting for its upcoming offloading of Otis and Carrier, carries around $24 billion in net debt. With that elevated debt level, you also have higher interest expense and EBITDA, by its very nature, ignores that.

An alternative lens to look at this through, then, would be free cash flow. This year, Raytheon should generate around $2.8 billion in free cash flow compared to United Technologies’ $3.2 billion. Combined, this implies an aggregate free cash flow of $6 billion, of which Raytheon should account for 46.7% of the pie. This number is higher than the ownership stake Raytheon’s investors are receiving, and it does reflect interest expense, but it also punishes both firms for capital expenditures aimed at growing their operations.

This led me, then, to decide to keep things really simple and look at operating profits minus interest expense. This year, I estimated this for Raytheon to be around $192.5 million, while for United Technologies, assuming a roughly even allocation of debt for it to Otis & Carrier, should incur around $931.5 million in interest expense this year without factoring in said divestiture. In all, this brings us implied pre-tax profits for Raytheon of around $3.31 billion this year, and for United Technologies it should be around $4.87 billion. In all, this translates to Raytheon receiving about 43% of the shares of the combined firm, while only contributing about 40.5% to the combined profit of the enterprise.

Right now, some investors are likely happy about this move, while others are probably upset. I don’t generally take synergies much into account, because companies can’t or don’t always succeed in hitting or even coming close to their targets, but even without those moves it looks to me like Raytheon is undeniably on the better side of the transaction. Some investors may disagree with me here, particularly because of the high debt United Technologies is bringing on, but so long as that debt is being refinanced and not paid does as it comes through, it’s really not the same as investors paying for it. Based on cash flows and profits, I would argue that both firms are likely to come out of this feeling upbeat, but the company I would most side with on this is certainly Raytheon at this time.