Solaris May Not Shoot Up Soon

Solaris Oilfield Infrastructure (NYSE:SOI) provides supply chain management and logistics solutions to the energy industry, including mobile and permanent infrastructure that increases proppant throughput capacity. I do not think the company’s stock price will show positive momentum in the short turn. However, the company continually adapts to the changes in the customer preference by offering innovative products and services, which makes it a steady growth candidate on a medium to long-term.

In Q1, the company has started deploying the mobile chemical management system on trial. Its top line will grow in 2019 if it can accelerate the chemical management systems deployment as planned. It made designs to integrate the Last Mile trucking with the well site rental equipment, which can be its next growth catalyst. Solaris’s margin is expected to improve through the application of the fully delivered systems.

The crude oil price volatility and the decline in the upstream companies’ capex budget can undo some of the progress expected from SOI. The company will not introduce any more mobile proppant system anytime soon, which will help reduce capex in FY2019 to generate positive FCF. It has initiated dividend payment recently, which shows its efforts in making shareholders’ return. 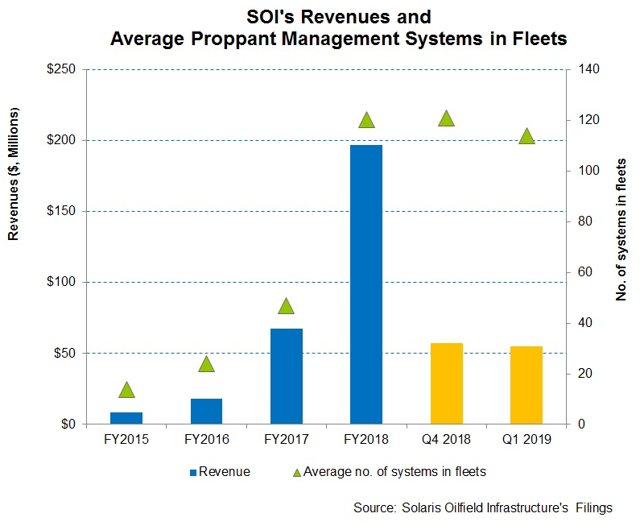 In Q1 2019, Solaris Oilfield Infrastructure’s top line declined 4% compared to Q4 2018. During Q1 2019, SOI removed seven mobile proppant management systems from the fleet. A little insight into the industry tells us that some of the company’s customers had believed during Q4 that they could bring some of the frac fleets back during 2019. However, from Q4 to Q1, the average West Texas Intermediate (or WTI) crude oil price declined by 7.5%, while the completion activity slowdown continued in many unconventional resource Basins. So, these companies ended up keeping the frac count relatively flat early in Q1 2019.

As a result, the company witnessed 6% lower fully utilized systems in Q1 2019 compared to Q4 2018. The metric was down due to the delayed effect of lower industry activity levels resulting from the delayed effects of the company’s monthly rental revenue model in Q4 2018. The Permian, however, is looking to come out of the infrastructure inadequacy issues faced in Q4. Investors may also note that using the fully utilized system count rather than the system count as the metric is more effective because the new parameter takes into account the white space in the calendar. 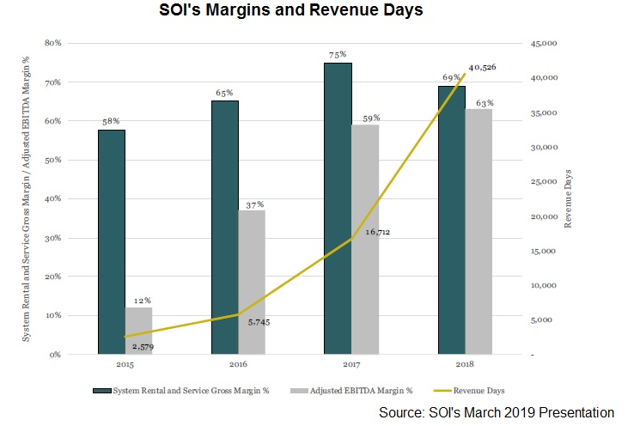 Solaris’s total operating costs and expense decreased more steeply (6% down sequentially) than the revenue’s decline rate, which resulted in a sedate adverse effect on the operating margin. It keeps personnel costs down by renting its proprietary system to the third parties and not operating them. One of the areas where the measure of performance has changed in recent times is sand consumption metric. While earlier it was measured as pounds per stage or pounds per lateral foot, the scale has shifted to pounds per hour now. In recent times, many operators have turned to regional sourcing of sand, which has reduced the need for storage, which, in turn, has lowered operating costs. Many upstream operators have started replacing their existing rental structure for the proppant system by using SOI’s fully delivered solutions. As the sales of the higher-margin fully delivered system increases, the company’s operating margin is also improving.

How Is SOI Delivering Value? 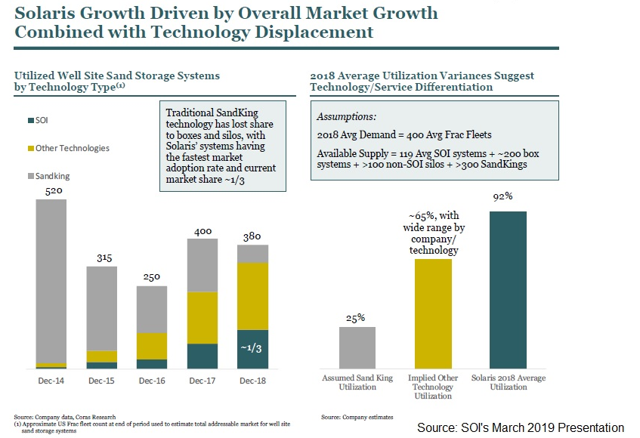 According to the data compiled by the company and Coras Research, Solaris’s proppant management systems have the fastest adoption rate in the market. Currently, it has one-third of the market share. Over the past years, traditional Sand King technology has lost market share to boxes and silos because of the competitive advantages of using the latter. SOI’s fully integrated and automated systems offer increased on-site proppant inventory and increased truck offloading points. The real-time inventory and consumption allow for lower labor requirement and inventory loss savings while maximizing asset utilization. According to the company’s estimates, while the traditional Sand King utilization fell to ~25% in 2018, SOI’s system utilization was as high as 92% during the year.

SOI places strong thrust on selling the Mobile Chemical System. Currently, the company has three systems working on trials with three different operators. It has also introduced Last Mile trucking with the well site rental equipment. The Last Mile system coupled with the company’s Solaris Lens technology can turn out to be a low-cost delivery solution, which can see increased demand in the market. Even if the U.S. hydraulic fracturing activity slips or flattens out, the new service offering could continue to grow.

Digging a little deeper into the Last Mile Solution’s potential scope, the company estimates that a higher amount of revenue is associated with trucking. The order size, when the order includes the Last Mile system, can earn eight times to ten times the revenue relative to the rental revenue. However, the trucking part of the revenue is generally low-margin. So, while the gross margin growth may decline marginally, the cash flow contribution margin per system in that model can increase, leading to an incremental margin.

In 2019, SOI’s most notable product addition is the AutoHopper system. The system is expected to keep operating costs down at the current price, thus improving margin. The company’s fully delivered system allows flexibility of unloading trucks and moving them off the well site through multiple unloading points. Plus, it has recently integrated the Solaris Lens software with third-party trucking software solutions. This is expected to drive down the trucking costs and improve efficiencies by being able to manage the logistics.

SOI’s management believes that it can deploy additional chemical management systems in 2019. Going by the industry trend, there will be increasing usage of zipper fracs and multi-well pads to improve drilling efficiency. Higher efficiency creates a higher demand for the use of chemicals in the systems. In Q2 2019, the company may see 12 to 14 chemical systems deployed. Recently, the company has made some alterations to its systems. It blends some of the components used in the concentrate so that it can deliver higher concentrations of chemicals and acids to reduce the trucking costs. The new chemical systems can also minimize labor requirements across the supply chain.

SOI’s cash flow from operations (or CFO) increased significantly (422% up) in Q1 2019 compared to a year ago, which resulted not only from the organic revenue growth but also from an increase in non-cash and working capital items. Due to such significant improvement, its free cash flow (or FCF) turned positive in Q1 2019. Also, its capex decreased in Q1 following completion of construction of the Kingfisher Facility and a drop in the manufacturing rate of new proppant systems.

In FY2019, the company expects capex to be in the range of $40 million to $60 million, which, at the guidance mid-point, represents a 69% decline compared to FY2018. The slowdown in capex is expected to result in significant FCF in FY2019.

As of April 30, 2019, SOI’s liquidity was $70 million, including $20 million of cash and $50 million availability under the revolving credit facility. In late April 2019, the company amended the facility and increased the revolver size by $30 million. The amendment also includes an accordion feature which could increase total availability under the facility to $75 million.

In March, the company paid a $0.10 quarterly dividend per share, which translates into a forward dividend yield of 2.81%. It initiated the dividend payment in December 2018.

According to data provided by Seeking Alpha, 11 sell-side analysts rated SOI a “buy” in June 2019 (includes “outperform”), while two recommended a “hold”. None recommended a “sell.” The consensus target price is $21.3, which at the current price yields ~41% returns.

However, according to Seeking Alpha’s Quant Rating, the stock receives a “Neutral” rating. Although its ratings are high on growth and momentum, the ratings are moderate-to-poor on value, profitability, and EPS revisions. I agree with Seeking Alpha’s assertion on strongly positive ratings on growth because the company’s revenues and profitability growth have been high in the past year. But in the past four quarters, the adjusted earnings beat analysts’ estimates. So, based on the recent past, my rating on EPS revision is higher than Seeking Alpha. Also, compared to its closest competitors (PUMP, WTTR, and FRAC), its net and operating profit margins were higher in Q1 2019. So, in my opinion, Seeking Alpha’s ratings on the profitability could be too low

What’s The Take On SOI?

SOI faces competition from the traditional proppant and chemical producers and transporters but has gained market share over the years through fully delivered silo-based sand storage systems and large capacity mobile proppant systems. The company has started deploying the mobile chemical management system on trial. Its top line will grow significantly in 2019 if it can accelerate the chemical management systems deployment as planned. It made designs to integrate the Last Mile trucking with the well site rental equipment, which can be its next growth catalyst.

The challenges for SOI are crude oil price volatility and the resulting tightness in the upstream companies’ capex budget. The company has decided not to introduce any more mobile proppant system until the energy market scenario improves. To generate positive FCF, the company plans to reduce capex in FY2019. It has initiated dividend payment recently, which signals the management’s ability to increase shareholders’ return.

Although the lack of proppant management systems deployment will hold back SOI’s top line in 2019, the introduction of the chemical management systems will recover some of the revenue loss. Its margin, however, is expected to improve because of the application of the fully delivered systems. The company’s stock price is not likely to show positive momentum in the short turn. However, SOI’s continuous adaptation of industry augurs well for robust medium-to-long-term growth.

We hope you have enjoyed this Free article from the Daily Drilling Report Marketplace service. If you have been thinking about subscribing after reading past articles, it may be time for you to act.

Good news for new subscribers! In May we are offering a 10% discount off the annual subscription rate of $595.00

Give it some thought, and act soon if you are interested. A 2-week free trial is applicable, so you risk nothing. Hope to see you in the DDR as we look for bargains in the oil patch!