Akero Therapeutics (NASDAQ:AKRO) has filed to raise gross proceeds of $75.0 million from a U.S. IPO, according to an S-1/A registration statement.

The firm is developing a treatment for metabolic diseases with high unmet clinical needs, with an initial focus on non-alcoholic steatohepatitis [NASH].

AKRO has demonstrated very promising trial results for its lead candidate and the IPO funds will likely last the firm through 2022.

San Francisco, California-based Akero was founded in 2017 to develop a therapy for the treatment of NASH, a serious type of non-alcoholic fatty liver disease [NAFLD] caused by chronic excessive caloric intake.

Management is headed by President and CEO Andrew Cheng, who has been with the firm since 2018 and was previously Chief Medical Officer at Gilead Sciences (GILD).

Akero Therapeutics is developing AKR-001, an analog of fibroblast growth factor 21 [FGF21], an endogenously-expressed hormone responsible for the regulation of the metabolism of lipids, carbohydrates, and proteins throughout the body.

According to management, AKR-001 has been tested before in patients with Type 2 Diabetes and has shown substantial improvements in lipid metabolism and insulin sensitivity.

The company has received approval for its Investigational New Drug application by the US FDA in May 2019 and anticipates it will begin screening for potential study participants shortly.

The main factors driving market growth are an increasing caloric consumption by the general population and the expected launches of investigational new drugs.

According to statistics, NAFLD currently affects around 80 million to 100 million US citizens and its incidence is expected to rise by about 63% between 2015 and 2030 while.

It is expected that in the upcoming years, NAFLD is going to become the most prevalent chronic liver disease in relation to Type 2 Diabetes.

Healthcare expenditure in the US attributed to NASH is estimated to be about $5 billion annually and is projected to reach $18 billion by 2030, if the disease is left unchecked.

Major competitors that provide or are developing treatments include:

AKRO’s recent financial results are familiar for development stage biopharma firms going public in that they show no revenue and material R&D and G&A expenses associated with advancing its pipeline through the trials process. 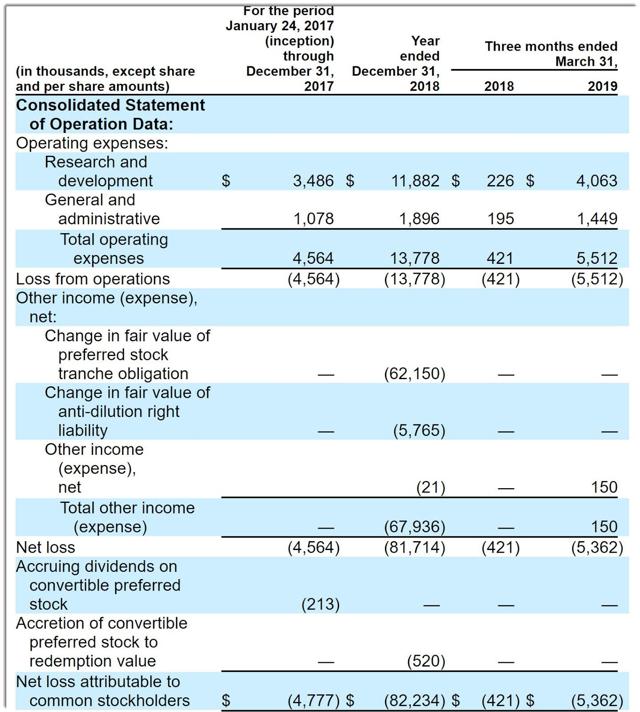 AKRO intends to raise $75.0 million in gross proceeds from an IPO of five million shares of its common stock at a midpoint price of $15.00 per share, not including customary underwriter options.

Existing shareholders have indicated an interest to purchase shares of up to $30.0 million in the aggregate at the IPO price, or 40% of the floatation. This is a positive signal to public market investors.

Assuming a successful IPO, the company’s enterprise value at IPO would approximate $324.6 million.

Per the firm’s latest filing, it plans to use the net proceeds from the IPO as follows:

We intend to use the net proceeds from this offering, together with our existing cash and cash equivalents, for development of our product candidate, AKR-001, including completion of our Phase 2a clinical trial and a subsequent Phase 2b clinical trial, for third-party drug substance and drug product manufacturing, as well as potential pipeline expansion and for working capital and general corporate purposes.

Management’s presentation of the company roadshow is available here.

Akero is a promising Phase 2a trial stage firm seeking $75 million to largely complete Phase 2 trials for its lead candidate to treat NASH.

The results so far are encouraging:

In a Phase 1b clinical trial, it was observed that AKR-001 substantially improved plasma lipoprotein levels, including reductions of up to 69% in triglycerides and 30% in non-high density lipoprotein cholesterol. In these clinical trials, it was also observed that administration of AKR-001 was associated with substantially improved markers of insulin sensitivity, including reductions of up to 37% in C-peptide and 55% in the homeostatic model assessment of insulin resistance. We believe these results indicate the potential of AKR-001 to redirect calories away from the liver, reduce liver fat, alleviate hepatocyte stress, inhibit inflammation and resolve fibrosis in patients with NASH, as well as reduce susceptibility to cardiovascular disease. This belief is also supported by data from Phase 2 clinical trials of other endocrine FGF analogs in patients with NASH, in which substantial reductions in liver fat content and biomarkers of liver fibrosis were observed.

Management has disclosed no commercial collaborations, so is proceeding on its own through the trials process.

There is significant competition in the NASH treatment space, with numerous major and smaller biopharma firms developing improved treatments for this fast-growing condition.

Management is asking investors to pay an enterprise value of $325 million at IPO, which is a reasonable price given the firm’s stage of development and promising trial results so far.

The firm expects the IPO funding to cover operations through 2022, which means the potential for upside catalysts upon completion of successful Phase 2a and 2b trials through that date.

For life science investors with a hold timeframe of at least 18 - 24 months, the IPO may be worth participating in.

Members of IPO Edge get the latest IPO research, news, and industry analysis for all U.S. IPOs. Get started with a free trial!