Editor's note: Seeking Alpha is proud to welcome Aruba Institute of Investment Expertise as a new contributor. It's easy to become a Seeking Alpha contributor and earn money for your best investment ideas. Active contributors also get free access to SA Essential. Click here to find out more »

The realization that economic growth develops in cycles is as old as mankind. Who is not familiar with the seven fat years that were followed by the seven lean years? After the Industrial Revolution, cycles have become more pronounced. In the United States there have been 33 cycles since 1845. The average duration of a whole cycle is 56 months, or 4.5 years. Since 1945, there have been 11 cycles with an average duration of 5.5 years. The longest cycle ever was, until recently, the 10-year cycle that began in March 1991 and lasted until March 2001.

However, that record has already been surpassed by the current cycle, which began in 2009 and continues until today. In the wake of this, the stock market indices rose each year. The next recession has been averted for the time being, but 2018 was the first year since 2008 that the S&P 500 fell on balance. Market conditions are clearly changing.

The world economy is following the U.S. growth pattern, although some economies follow a very different cycle. In Europe, for example, the 2011 euro crisis caused a double dip. Only thereafter did the upward phase really gain traction. On the other hand, Australia has not experienced any recession at all for 25 years.

The Bull Case and the Bear Case

There are strong arguments for expecting the next recession to occur within a number of quarters, but there are also good arguments for it to take another year or two. Let's discuss both arguments.

Arguments for a rapid recession:

Analysts who are expecting a recession soon cite the following reasons:

The U.S. economy has received a great deal of support from recent tax reforms by President Trump. The effect of that support will now fade away. Without the part of extra spending that is financed by increasing debts, economic growth would already have been negative even last year.

Last year, a number of interest rate hikes caused the yield curve to become slightly inverse. The attached graph shows a number of yield curves of important moments prior to previous recessions. The current yield curve, which is shown in yellow, has quite some similarities. To contrast this with the early cyclical phase, the 2011 yield curve is also shown as a steeply rising curve (grey line). An inverse yield curve inhibits spending, because it encourages investors to keep their money short in cash like securities, instead of investing in long term securities that can be used by entrepreneurs.

Many hedge funds, family offices and other smart investors have taken defensive positions for some time now. Incidentally, one of the reasons, that the recovery of stock market indices from last Christmas on was so rapid and fierce, is that much of the smart money had already taken short positions. When the Central Bank in America (the Fed) changed its tune, these short positions had to be hedged or reverted quickly. 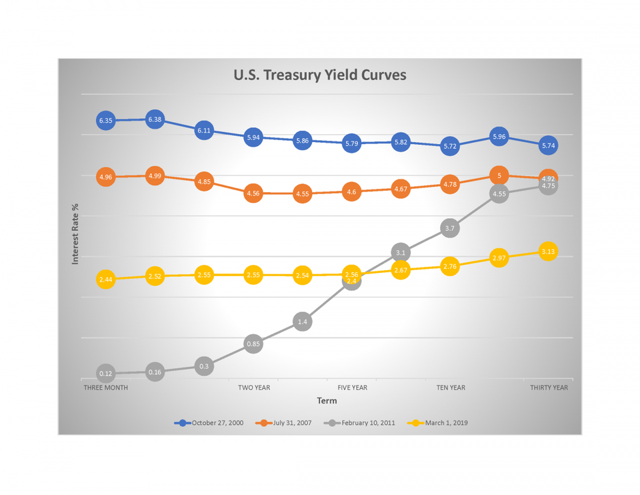 Arguments against a rapid recession:

Analysts who do not expect a rapid recession cite the following reasons:

When the financial markets collapsed in the fourth quarter of last year, the Fed made a 180-degree turn. Earlier announcements that interest rates would be raised were quickly withdrawn. In addition, quantitative tightening, which involves withdrawing money from the capital market, is being phased out. From September on, the balance sheet of the Fed will be kept constant. These policy changes gave a strong impulse to financial markets, and as a result the stock market indices almost completely recovered.

Inverse yield curve not convincing yet

There has been a great deal to do about the inverse yield curve, which would be a prelude to a recession. The three-month rate has indeed been above the five-year and the 10-year rate, but the inversion has not been convincing yet. For the time being, it's more like a flat curve. As a prelude to a recession, the curve must first be reversed deeper and for a longer period of time.

For President Trump, a recession would significantly reduce the chances of his re-election in November 2020. He will use every opportunity to prolong the cycle. There is a good chance that he will get some support from Fed Chair Jerome Powell, who has been appointed by him. However, the chances of the Fed lowering rates before the quantitative tightening has been phased out are very slim. So at the earliest, rates could be decreased in October. Possibly, a trade deal that Trump could close with China would also provide a reason.

Besides China's falling productivity growth and diminishing returns, the increased trade tensions with the U.S. are also beginning to affect China's growth. These tensions will keep raising the risk of a global recession next year if the dispute between the two largest economies is prolonged and escalates further. Negotiations took a turn for the worse on May 10. The U.S. raised tariffs to 25% on almost $200 billion of goods from China and it is expected that levies will be added to almost all Chinese-made products later this year. In response to this, China announced that it will raise tariffs levied on about $60 billion of goods from the U.S. in retaliation for President Trump's decision.

The concern now grows bigger. The risk is that recent events could further reduce investment, productivity and growth.

The Role of China

Aside from the trade conflict, China's role in the next recession will be totally different from that during the previous crisis. In 2008-09, debt in China was still low, which enabled it to make a significant contribution to the recovery of the world economy by increasing debt levels and thus boosting spending. In the next recession, China will not be able to do so, as its debt levels are now at least as high as in Western countries.

Nevertheless, China has taken measures to postpone the next recession for a while. The authorities had previously put a considerable brake on the lending of their state-owned banks. But since the end of last year, all the brakes have been released. One way or another, the country will reach its growth target of 6%. This will give a big boost in the short term, although later it will become evident how inefficient that capital has been allocated.

Whether the next recession comes in a year, two years or maybe even three years, we don't know - but that it eventually will come is a certainty. Investors often expect that the next crisis will be about similar to the previous one, of which they still have a vivid memory. However, history does not repeat itself, although it does often rhyme, as the saying goes. This means that there will not only be similarities, but also many differences. The crisis of 2007-08 occurred very suddenly and caused severe shocks in financial markets. The next crisis will cause less violent reactions because it will not come that unexpected. There seems to be a good chance for a kind of slow-motion crash, which also took place in 2000-02.

Many people think that, just as in 2007-08, the next recession will cause havoc in the financial sector. That too is unlikely. Most banks have considerably strengthened their buffers, supervision has been tightened and risks have been reduced.

Nevertheless, huge debts have been accumulated worldwide in recent years, which can cause problems. However, this accumulation of debt has not taken place in the regular financial sector, nor has it taken place with ordinary families. On the contrary, households have reduced their debts. Groups that have built up a lot of debt are the corporate sector, governments, and specific segments of society such as students who borrowed for their studies.

Large companies have issued corporate bonds on a massive scale, much of which spent by companies buying back their own shares. In the next crisis, the business sector is more likely to be hit hard than households or banks. In addition, the national debt of many countries can also become unsustainable in the long run. This is particularly true for emerging countries that have borrowed in dollars. Weak countries in the eurozone will also face problems, which could lead to the reemergence of tensions within the euro area. Incidentally, Italy is one of the few countries that faced a recession already earlier this yearly, although last month (May) it also recovered again.

In 2016, when economic growth in China fell sharply, many analysts had concerns about a possible recession. Back than, in reaction to this threat, central banks around the world substantially eased monetary conditions, which caused economic growth to pick up again quickly. We see the outline of this same pattern recurring now again. In China and the U.S., the growth forecasts have now been revised up and the dangers seemed to have been averted for a while. Nevertheless, the impact of central bank policies is becoming less and less effective. It is therefore questionable how the market will react if the company's results start to disappoint. This is likely to happen because input costs are rising and the trade conflicts are escalating.

We believe that further upside potential is now limited, while downside risk increases. It is therefore important to position portfolios more defensively. We advise building up a modest cash position of 15%- 25% of the portfolio. At the next dip, part of this liquidity can be put back to work.

In addition, the volatility dropped sharply again from January, making put options relatively cheap. We advise investors to buy combinations of short-term "deep out of the money" options on the SPDR S&P 500 Trust ETF (NYSEARCA:SPY), the S&P 500 index tracker, when good opportunities arise. For example, the SPY September 190 put option costs only 13 cents. It is unlikely that the S&P 500 will fall back to 1900 as early as September, but if the stock market were to fall sharply again during the summertime, volatility will skyrocket, and these options will multiply in value. We recommend to spread the put options somewhat over maturities and strike prices, and to roll them over to the next series in due time.

In addition, adequate diversification of the portfolio remains crucial. Small positions in commodities such as gold or silver are also recommended as these have a low correlation with equities.

Aruba Institute of Investment Expertise
144 Followers
I am an experienced investment professional, who worked at several institutional investment companies. I have worked both in private wealth management and in institutional money management. Currently I am lecturer at the University of Aruba, teaching courses like finance, business valuation and financial markets. Besides I screen and analyse financial markets with the purpose to write investment articles for a wide audience. My focus is global deep value, net net stocks, small and micro caps. Occasionally I also write articles on general economic trends.
Follow

Disclosure: I am/we are short SPY. I wrote this article myself, and it expresses my own opinions. I am not receiving compensation for it. I have no business relationship with any company whose stock is mentioned in this article.