On May 23, 2019, VF Corporation (VFC), which owns brands such as Vans, The North Face and Timberland, completed the separation of its jeanswear business into a separate listed entity. The jeanswear business owns Wrangler, Lee and Rock & Rock and Republic Brands as well as the VF Outlet business. VF corporation holders received 1 share of Kontoor Brands (NYSE:KTB) for every 7 shares of VFC.

KTB does $2.7B in revenue producing $385M of EBITDA and $225M of operating cashflow on a pro forma basis. It's primarily (73%) a U.S. business driven almost entirely by its Lee and Wrangler brands. Wrangler enjoys higher profitability and margins than Lee given its size (see page F-37). 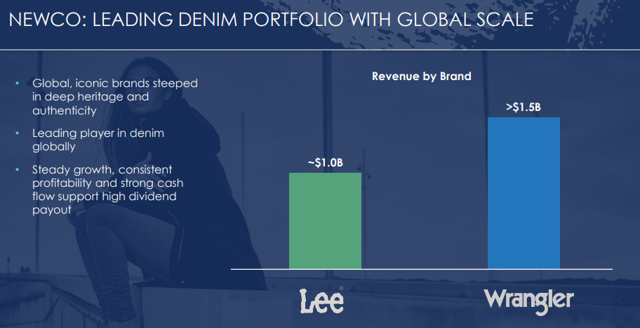 However, it is also worth noting that comparing the slide immediately below shown on 1 April 2019, with the one further below from August 2018. Kontoor's performance has deteriorated on a EBITDA margin basis from "high teen" to "14%." 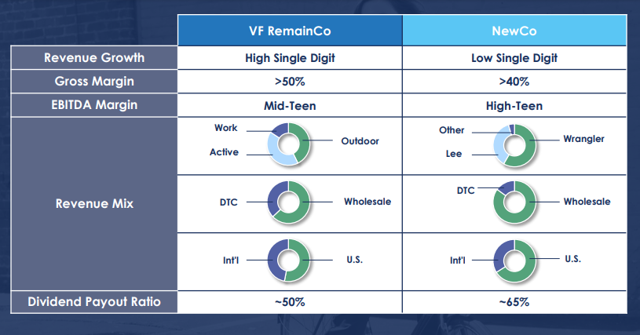 The Market for Jeans - Secular Decline?

Jeans are a big market in the U.S. Over 1 in 4 American men and a little under 1 in 5 women wear jeans everyday, according to a Morning Consult survey. Furthermore, from the same survey Lee and Wrangler both exceed 50% net favorability, above average, though lacking the iconic nature of Levi's with a 70% net favorability rating. That's all positive, but we should also note that the core audience for jeans is 50+ and younger generations are less enamored by jeans. With purchase consideration for Lees and Wrangler at about half the level for the under 35s and the over 50s.

Of course, it remains to be seen whereas younger consumers will grow into the idea of jeans and embrace them as they age, or whether jeans are a fashion trend that will fade as the U.S. population ages.

Kontoor is run by CEO Scott Baxter, who formally ran the U.S. West segment for VF corporation. That's slightly disappointing, since sometimes very senior management going with the smaller spin-off and taking lots of stock in the business can be a positive signal, given they know the opportunity better than anyone. In this case, management appears consistent with the size of the business, but most senior leadership is staying with the larger entity.

At this point we have to deal with pro forma numbers (see page 67 of this SEC disclosure), which carries some risk. Still revenues, operating income and EBITDA have been in general decline from 2014-2018.

However, aside from the sale of trade accounts receivable to VCF as part of the separation transaction in 2018, FCF is has been positive with the company generating substantial positive FCF in 2014-2017 and the cash outflow in 2018 likely entirely due to the spin.

If we consider EV/EBITDA, then we have $350M of EBITDA if we apply a 9x EV/EBITDA multiple, which seems fairly conservative when the admittedly superior business of Levi's trades at 12x. Then we have an equity value of $38/share.

As such, compared with the current price of $27 we have potentially 40% upside.

There are clear risks. Levi and Wrangler appear brands that resonate more with older U.S. consumers at a time when retail is fundamentally changing. It also appears clear that operational leverage is reasonably high, selling one extra pair of jeans is disproportionately profitable, so as we've seen over recent years, soft sales hits profits disproportionately. Furthermore, should the prospect of Mexican tariffs return, that may impact margins. As such, KTB may be a melting ice cube on a longer term view. However, even if it is, it may generate significant cashflow as it does.

For example, assume free cashflow decays at 5% a year for the next 5 years. Then the business still generates sufficient cash to substantially repay its debt in full or to repurchase two thirds of the share count at current prices. This of course, assumes reasonably capital allocation and not frivolous acquisitions.

Waiting for the Fat Pitch

It does seem that KTB should trade higher from these levels as it finds its feet as an independent company and starts to build credibility with the market both on operational performance and capital allocation.

That said, even though we have upside today, given risks to the longer term outlook for jeans in general and a the structural changes in U.S. retail, we chose to wait for the "fat pitch" and would be a buyer of KTB in the low $20s when the risk/reward setup would be more favorable than today.

Rational Expectations
971 Followers
Value-oriented ideas and special situations, generally mid/small cap. Also, orphaned and unfashionable investment ideas, ideally with a catalyst and the prospect of asymmetric upside/downside payoffs. Contrarian tendencies. To some extent I'll go anywhere if it's cheap and I'm more influenced by momentum and quality than I used to be.