NCS Multistage Holdings (NASDAQ:NCSM) provides engineered products and support services. The company’s offerings help optimize energy well completions and field development strategies. I don’t think NCSM’s stock price will produce attractive returns in the short term. But if the crude oil price stabilizes for a sufficiently long period, the well completions activities will kickstart, which can cause the stock price to rebound. These should drive the stock price higher in the medium to long term.

Upstream customers’ budget constraints and stiff competition from peers are keeping pricing for NCSM’s offerings low. In Canada, the sharp fall in the upstream companies’ activities can result in significant revenue loss in Q2. Despite the headwinds, the AirLock casing buoyancy system, products to aid the enhanced oil recovery techniques and the tracer diagnostics products sales in the U.S. will help recover the sales growth. In the international market, NCSM looks to expand business in Argentina in the near-term, while there are a few long term international projects. Its balance sheet is healthy with sufficient liquidity.

NCSM’s primary offerings include the pinpoint stimulation and tracer diagnostics. The trend towards more complex well completions and multi-pad drilling has resulted in increased use of tracer diagnostics services. The company has grown its fracturing systems and well construction business through Repeat Precision and the acquired Spectrum Tracer Services. In the more recent past, NCSM’s primary focus has been the Airlock product sales. The AirLock casing buoyancy system facilitates landing casing strings in horizontal wells. In FY2018, NCSM’s AirLock sales increased by over 80% as compared to FY2017.

In 2019, the company is once again shifting its stance to respond to an environment where the upstream customers are living by their cash flow means and look to mitigate declines from the existing production base rather than investing in new E&P facilities. The enhanced oil recovery (or EOR) techniques including fracking using water, CO2, miscible gas, the injection would improve capital efficiency. The company’s Qumulus Ultimate Recovery system is expected to optimize long-term recovery and enhance oil recovery applications. The combination of the Qumulus Ultimate Recovery systems with other innovative EOR technologies like the Terrus water injection frac sleeve will maximize resource recovery, mitigate declines, and improve financial returns. Not just that, these innovative products can also lead repeat orders for the company’s Purple Seal composite plugs, which was first bought in January 2019.

What Keeps The U.S. Business Ticking? 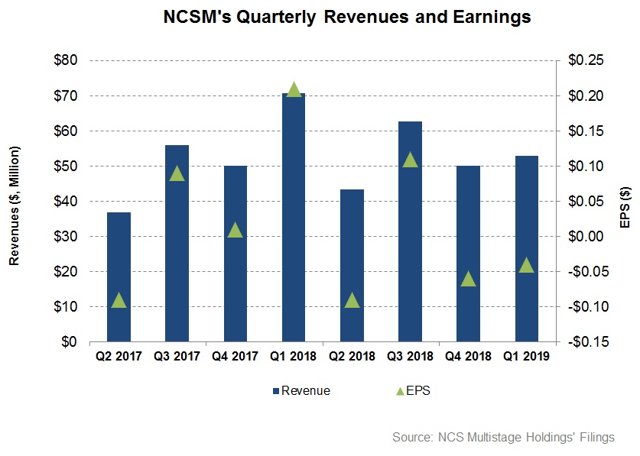 In the U.S., the company’s sale of the sliding sleeve systems, which is used in fracturing systems, has had a sedate year so far in 2019 due to relatively low demand in the completions activities. However, EIA’s data shows that the drilled-but-uncompleted (or DUC) wells have gone up considerably in 2019. Although it did decline in April, the expectation of a completions activity rebound is quite palatable. So, the sliding sleeves can go up in demand in the latter half of 2019.

The company’s plug sales have been steady. The company expects to achieve a higher market share, which will drive the sales growth in 2H 2019. The AirLock casing buoyancy system is seeing increased adoption in the wells. But investors would be wise to consider the fact that the recovery would be slow in the second half unless the indicators turn up the heat. 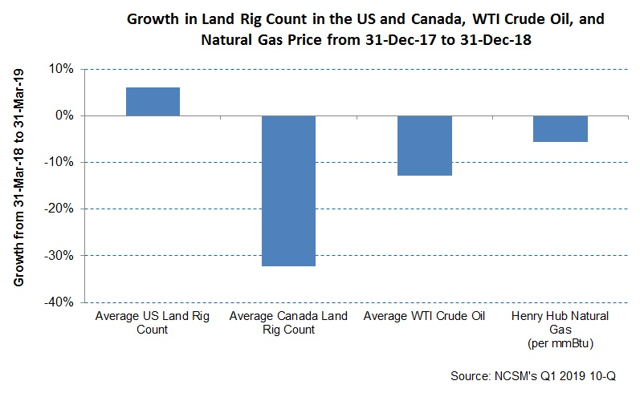 The relative weakness in the industry indicators also caused lower hydraulic fracturing activity in Q1, although the customers using its pinpoint fracturing systems remained nearly unchanged. NCSM’s management expects a modest recovery in the fracking activity in Q2. The tracer diagnostics product, which is one of its key offerings, saw steep pricing discount in Q1. However, in Q2, the company may add some premium due to its ability to offer particulate tracers and the field service and laboratory services quality. 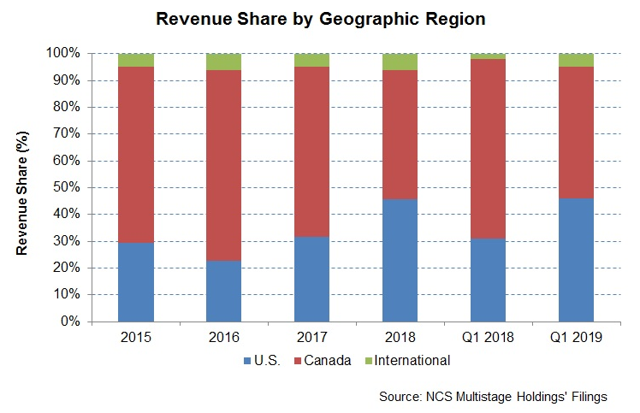 In Canada, the energy environment has remained tight. For the past several years, the well service business in Canada has had structural flaws, which resulted in severely low rates and utilization. The rig count in Canada decreased by 32% in Q1 2019 over a year ago. WCS (Western Canada Select), which tracks heavy oil from Canada, typically trades at a discount relative to WTI (West Texas Intermediate). The lower price reflects quality issues as well as the cost of transport from Alberta to refineries in the U.S. However, the WCS–WTI spread came down significantly during the end of Q1 2019. The differential increased to $10.61 in April 2019. NCSM’s revenues from Canada operations declined by 47% in Q1 2019 compared to Q1 2018.

In Q2 2019, the key industry indicators may see some positive upturn following a stable WCS differential, favorable effect of the exchange rates, and an improved political environment. However, even if cash flows improve, the producers may use the excess cash flows to reduce debt or return capital to shareholders first. So, revenues from Canada may continue to slide for NCSM. Over time, if the crude oil price stabilizes, the Canadian upstream producers’ capital budgets could expand and drilling activity can increase in Q1 2020.

Growth Opportunities In The International Business

In the past year until Q1 2019, NCSM’s revenue growth from the international operations was the most remarkable (66% up). During this period, it expanded the tracer diagnostics customer base in Argentina and shipped its first order to the Middle East. However, the growth was partially offset by some issues with fracturing fluid. In the North Sea in Europe, the company received a multi-year contract with Aker BP that was signed in 2018. The company expects activity to increase in 2020 and 2021 there.

In Q2, NCS Multistage’s management expects the U.S. revenues to remain flat in Q1, while revenues from the international operations may decline marginally. Revenues from Canada can decline by 55% and 65% in Q2, which means the rate of fall can accelerate compared to the rate witnessed in Q1 relative to Q4 2018.

NCSM’s net debt turned significantly positive as of March 31 as a result of its total debt exceeding cash & equivalents. Its net debt was negative in four out of the past eight quarters. Negative net debt is typically a sign of financial strength and stability. Its total liquidity as of March 31, 2019, was $67 million.

In Q1 2019, NCSM’s cash flow from operations was negative. Despite a 25% fall in revenues during this period, there was a reduction in the use of cash due to favorable changes in the working capital requirement in Q1 2019 due primarily to lower accounts receivable balance.

The company plans to spend $8 million to $12 million in capex in FY2019, which would be ~36% lower than FY2018. The company has $21.7 million in debt repayment in the next one-to-three years. With sufficient liquidity, meeting contractual obligations and the capex should not be difficult for NCSM. 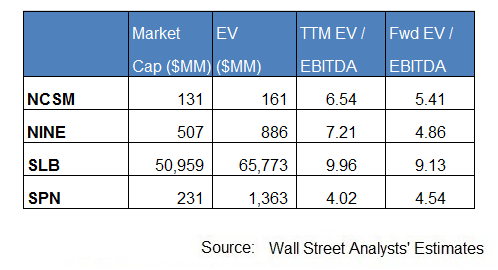 NCSM’s forward EV-to-EBITDA multiple contraction versus its adjusted trailing 12-month EV/EBITDA is steeper than the industry peers’ average multiple compression because the sell-side analysts expect the EBITDA to rise more sharply compared to the peers in the next four quarters. This would typically result in a higher EV/EBITDA multiple compared to peers. The stock’s EV/EBITDA multiple is lower than its peers’ (NINE, SLB, and Superior Energy Services, Inc. (SPN)) average of 7.1x. So, it can be relatively under-valued at the current level. I have used estimates provided by Thomson Reuters in this analysis.

According to data provided by Seeking Alpha, three sell-side analysts rated NCSM a “buy” in June (includes “outperform”), while four recommended a “hold.” None of the analysts rated a “sell.” The consensus target price is $4.7, which at the current price yields ~68% returns.

However, according to Seeking Alpha’s Quant Rating, the stock receives a “Very Bearish” rating. Although its rating is moderate on growth, the ratings are moderate-to-poor on value, EPS revisions, profitability, and momentum. I do not agree with Seeking Alpha’s assertion on positive rating on growth because the company’s revenues and profitability growth were negative in the past year, while its cash flows have been quite low for making any meaningful impact. I also think Seeking Alpha’s grade on value could be too low as its relative valuation could be low at this level. I agree with its low ratings on profitability because of the company’s loss at the operating as well as the net basis. The rating on EPS revisions is also agreeable because of its recent history of EPS misses versus the analysts’ estimates.

What’s The Take On NCSM?

Upstream customers’ budget constraints and stiff competition from peers are keeping NCSM’s pricing low. In Canada, the sharp fall in the upstream companies’ activities can result in significant revenue loss in Q2. However, the energy industry has been facing strategic flaws in Canada for quite some time, and I think the stock price has already discounted the information.

Despite the headwinds, the AirLock casing buoyancy system and the tracer diagnostics products sales in the U.S. will help recover the sales growth. In the international market, NCSM looks to expand business in Argentina in the near term, while there are a few long-term international projects. I don’t think the stock price will produce attractive returns in the short term. But if the crude oil price stabilizes for a sufficiently long period, the well completion and reservoir characterization business will kickstart, which will cause the stock price to rebound. Its balance sheet is also healthy with sufficient liquidity. These should drive the stock price higher in the medium to long term, especially given that the stock can be relatively under-valued at the current level.

We hope you have enjoyed this Free article from the Daily Drilling Report Marketplace service. If you have been thinking about subscribing after reading past articles, it may be time for you to act.

Good news for new subscribers! In June, we are offering a 10% discount off the annual subscription rate of $595.00.

Give it some thought, and act soon if you are interested. A 2-week free trial is applicable, so you risk nothing. Hope to see you in the DDR as we look for bargains in the oil patch!