2019 has already been billed as the year of the mega-IPO. Many of the world's most anticipated unicorns went public this year, including Uber (UBER), Lyft (LYFT), and Pinterest (PINS). Next week, enterprise chat giant Slack (WORK) is slated to go public as well, following in the footsteps of Spotify (SPOT) and opting for a direct listing. But surprisingly, one of the most successful IPOs of the year is a company in the decidedly unsexy business of selling pet food and accessories, Chewy (NYSE:CHWY).

Prior to its IPO, Chewy was a majority-controlled subsidiary of PetSmart; post-IPO, PetSmart will continue to own about four-fifths of Chewy's stock. Hewing off Chewy from its parent allowed PetSmart to sell a rapid-growth story to Wall Street, and it clearly worked - shares of Chewy shot up nearly 60% on its first day of trading relative to the initial IPO price of $22:

Such a bold debut has given Chewy an incredibly large valuation, especially for a company that is essentially a low-margin retailer. Yes, it's true that Chewy is a fast-growing company in an appealing niche category - but despite reaching a ~$4 billion annualized revenue run rate, the company still doesn't produce any profits. This is different than a tech company's inability to make any money: a software or internet company's gross margins are high and its fixed cost base is relatively low, so when it matures into a larger scale, it can produce much higher profits. A retailer like Chewy, on the other hand, has a far more limited ability to scale its profitability with only ~20% gross margins.

We could say that Chewy's overhyped IPO debut indicates that we could be in something of a bubble for recently-minted IPOs (we'll dive into the stock's valuation shortly). Interestingly, Chewy has a defense for this line of thinking - in its IPO materials, the company bills itself as a recession-proof business, noting how the U.S. pet industry continued to add revenues even through the depths of the Great Recession:

Chewy certainly has a point. The company has capitalized on a trend that it has dubbed the "humanization" of pets in the United States, pointing to the increasing average spend per pet among pet-owning households. No matter what happens between U.S. and China in the ongoing trade war, rest be assured that pet owners will still continue to lavish their beloved pets. Despite this, I worry about the fact that Chewy is nevertheless playing in a mature industry, and the rapid revenue growth it has seen in its early years has already begun to taper off.

In short, I'd stay away from this IPO. Chewy has propped itself up with plenty of fluff (no pun intended) to make it seem like an online subscription business with loyal repeat purchasers, but at current levels, investors are likely paying far too much for an old-fashioned business with low margins and plenty of competition, both online and offline.

First, a quick rundown of the final details on the IPO:

And, as is usual for IPOs, Chewy's underwriters also have a 15% "green shoe" option open, leaving the possibility of selling an additional 6.24 million Class A shares (as a conversion from the Class B pool) and raising an additional $137.3 million in gross proceeds. In addition, Chewy insiders are subject to a typical 180-day lockup period expiring in December, during which they cannot sell Chewy shares.

Chewy has notched an excessive valuation

Now we can get into the meat of our analysis. We first have to recognize that, all else being said, Chewy is a phenomenal growth story. The company remains one of the most successful names in online retailing of pet goods, and in a mere eight years, the company has transformed from virtually nothing to a $3.5 billion revenue powerhouse: 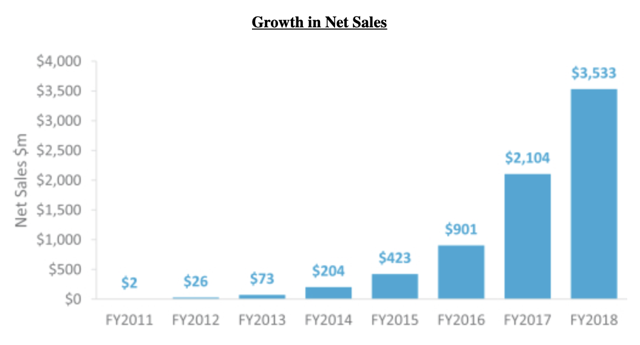 The company grew principally by, in its own words, "offering virtually everything a pet needs." This ranges from food and toys to pet medicine. The company's online store sells over 45,000 unique products. The company prides itself on its ability to create recurring customers - in 2018, the company noted that it notched a 120% net retention rate from customers in the prior year's cohort.

Here's a more detailed look at the last three years of financials; in the most recent fiscal year, Chewy notched a 68% y/y growth rate in revenues, but still found itself with a -$268 million loss:

Yet, we note the two key issues with Chewy - one, its growth rate is fading (which isn't surprising, as all companies tend to see decelerating growth as they scale); and two, it has failed to produce any operating profits to date.

Chewy has not yet published official results for Q1 2019, but the company has included in its S-1 filing an estimate of the first-quarter results. We note that revenue growth has slowed dramatically to $1.11 billion, representing a 45% y/y growth rate - far slower than its full-year FY18 growth rate. 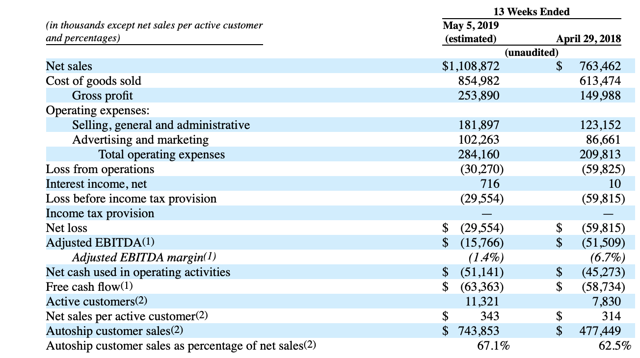 We note also that, despite improvements in operating profits and adjusted EBITDA, Chewy has still failed to produce positive profits. As previously mentioned, Chewy's gross margin is limited (22.8% in 1Q19 estimated results; 20.2% in FY18), so we can't expect the company to become a profit fountain like software/internet names at a larger scale. In addition, the company's free cash flow burn has widened to -$63.4 million.

Note that Chewy isn't exactly flush with cash. As of the end of Q4 2018, the company had just $88.3 million of cash. Even after topping up this cash balance with the ~$111 million that Chewy stands to raise from the IPO, there isn't much liquidity runway left to absorb many quarters of FCF burn. The company may have to turn back to the markets in order to raise more cash to sustain its growth. The market may have loved Chewy in its IPO, but history shows that secondary issuers typically get a frigid treatment.

With a total share count of 398.6 million post-IPO, and with shares now hovering at $35 per share, Chewy now has a giant market cap of $13.95 billion; after netting off the company's $88.3 million of balance sheet cash and $111 million of expected IPO proceeds, its enterprise value stands at $13.75 billion.

Let's generously assume that Chewy can manage a 40% y/y growth rate throughout FY19, giving us an FY19 revenue estimate of $4.94 billion. This puts Chewy's current valuation at 2.8x EV/FY19 revenues.

We note that this is roughly on par with Amazon's (AMZN) forward revenue multiple - while Chewy's growth rate is certainly higher than Amazon's, which last quarter slipped into the high teens, we note also that Amazon has a far higher-margin mix of businesses thanks to software offerings like AWS, as well as the fact that Amazon is also infinitely more profitable:

Viewed from this lens, I see Chewy's valuation as a full one that leaves little room to run. While Chewy is certainly an innovative concept with fresh marketing and an evidently loyal customer base, the company's ability to ramp into a company that is both significantly larger than it is today, as well as one that is able to produce profits and cash flow, is a big question mark. Stay away from this stock until prices come down to more reasonable levels.

Gary Alexander
23.85K Followers
Author of Daily Tech Download
Curated research on high-performing tech; winning trades closed monthly
With combined experience of covering technology companies on Wall Street and working in Silicon Valley, and serving as an outside adviser to several seed-round startups, Gary Alexander has exposure to many of the themes shaping the industry today. He has been a regular contributor on Seeking Alpha since 2017. He has been quoted in many web publications and his articles are syndicated to company pages in popular trading apps like Robinhood.
Follow