Cholestasis is initiated by a reduction or stoppage of bile flow due to obstruction in the biliary tract that leads to bile acids accumulation and ensuing liver toxicity. Disorders of the liver, bile duct, or pancreas can cause cholestasis. Common symptoms include yellowing skin and eye whites and pruritus (intense skin itch).

Bile is a dark green to yellowish brown fluid, produced by the liver, the body's second largest organ. An estimated 400-800 ml of bile is produced daily in a healthy adult, then stored and concentrated in the gallbladder. The liver is responsible for processing what we ingest and removing toxins from the blood. As the epicenter of metabolic homeostasis, the liver performs many functions, including hormone biosynthesis, protein and bile synthesis, drug metabolism, gluconeogenesis, and lipid metabolism.

Bile acids, the major constituent (~80%) of bile with small amounts of phospholipids and cholesterol, are produced in the liver from cholesterol. Bile is released into the small intestine in response to food ingestion to aid the digestion and absorption of dietary fats. Following digestion, bile acids bind to IBAT also known as the apical sodium bile acid transporter, (ASBT), located at the terminal ileum (i.e. end of the small intestine), for transport back to the liver via a portal vein in a process known as enterohepatic recirculation (Fig. 1).

In a healthy individual, increased production of bile acids produces an increase in bile flow. Bile acids also exert hormonal actions throughout the body, via the farnesoid X receptor (FXR). Notably, ocaliva by Intercept (ICPT), the breakthrough therapy for PBC is an FXR agonist. 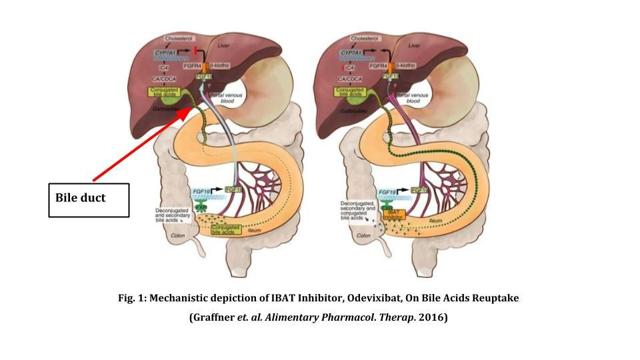 PFIC: Is a progressive chronic genetic cholestatic liver disease linked to mutation in the IBAT gene that leads to a defect in IBAT function. PFIC is characterized by severe pruritus (intense itching), persistent cholestasis and subsequent liver failure. PFIC encompasses a group of autosomal recessive rare genetic disorders involving the liver-biliary tract transporters which are caused by a defect in bile secretion from hepatocyte to canaliculi that clinically manifest as cholestasis in infancy or early childhood, affecting 1 per 50,000-100,000 children born globally. The 3 classes of PFIC are presented in Table 1. 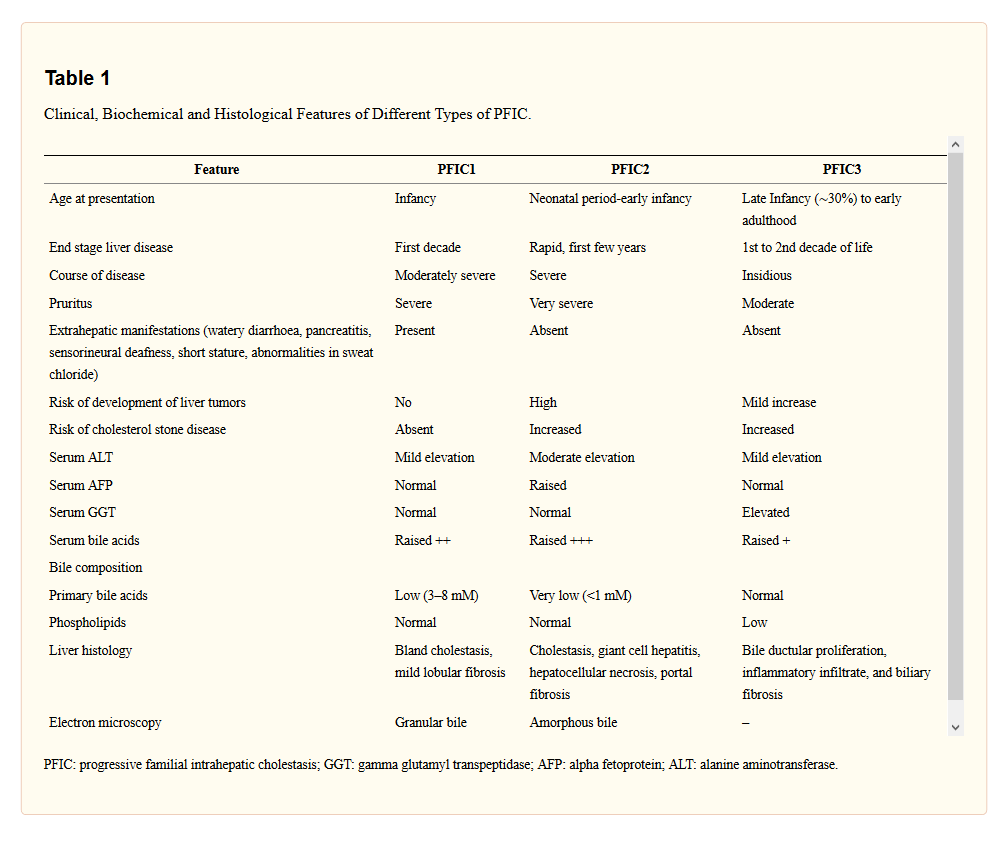 The cause of biliary atresia could be idiopathic during pregnancy or by viral infection acquired after birth. Biliary atresia can only be treated by surgical intervention called hepatoportoenterostomy or Kasai procedure that re-establishes bile flow from the liver into the intestine. Biliary atresia affects about 1:12,000 infants in the United States.

Alagille syndrome: It was first described in France in 1975 by a pediatric hepatologist. The gene that caused Alagille syndrome was identified in 1997. In contrast to PFIC and biliary atresia, Alagille syndrome affects multi-organ systems including liver, eyes, heart, skeletal abnormalities, and characteristic facial features.

Patients with this genetic disorder have fewer number of small bile ducts inside the liver compared to a healthy individual. This leads to bile builds up in the liver causing liver damage. Symptoms and complications of Alagille syndrome are treated with medicines and in some cases surgery based on the specific symptoms that are apparent in each individual. It affects between 1 per 30,000 -45,000 individuals.

As you can see from the description above, these rare pediatric cholestatic liver diseases are different but have a unifying goal of inducing obstruction in bile flow that triggers cholestasis and associated pruritus.

In summary, Odevixibat therapeutically prevents further accumulation of bile acids that induce toxicity, by increasing its colonic excretion while suppressing de novo bile acids synthesis. Albireo's mechanistic approach of blocking the bile acid transporter is very unique because it is like extinguishing the source of fire to dampen its effects.

we submitted a protocol amendment for an additional cohort that would include PFIC patients who have elevated serum bile acids and pruritus that aren't eligible for PEDFIC 1. That includes people with all types of PFIC along with patients over the age of 18, and younger than six months. We anticipate initiation of this additional cohort in H2/2019.

Odevixibat demonstrated marked reductions of up to 92% in serum bile acids levels in the majority of Alagille patients, that also showed improvement in pruritus as measured by three different scales.

On biliary atresia, Albireo highlights that:

It is the only company to generate positive data suggesting an effect on bile acids and pruritus in biliary atresia patients using a pharmacologic approach (such as odevixibat). Odevixibat demonstrated significant serum bile acid reductions of 57.6% and 50.8% in two patients with high baseline bile acids (> 130 μmol/L) and showed improvement in pruritus across two different pruritus scales.

No effect was observed in a third patient with a low baseline sBA. These data, combined with the total dataset of n =24, form the basis for a pivotal development program in a second indication, biliary atresia.

The pivotal Phase 3 trial for odevixibat in biliary atresia will be initiated in H2/2019. Worth pointing out that at present, surgical intervention remains the only therapeutic option for these patients.

The basis for this thesis was the clinical finding from Albireo on odevixibat in the Phase 2 study in PFIC patients. A recent pilot study in a small number of adult PBC patients provided preliminary evidence consistent with odevixibat improving pruritus. Furthermore, published reports that pruritus is initiated by retention of bile salts deposited in the skin.

To the best of my knowledge, there is/are no evidence that Ocaliva by ICPT suppresses circulatory bile acids which may somewhat explain its lack of effect on improving pruritogenic responses. On the other hand, seladelpar, a selective PPAR-δ agonist in development by CymaBay (CBAY) has been associated with some improvement (to be confirmed in Phase 3 study) in pruritogenic responses, but its effect on serum bile acids levels are currently unknown. GS-9674 is an FXR agonist in development by Gilead and it suppressed serum bile acids levels to improve pruritus in the cholestatic liver disease, primary sclerosing cholangitis.

I surmise that effective anti-pruritogenic drug candidates may have a "flushing cleanse effect" on bile acids deposited in the skin due to their effectiveness at suppressing systemic serum bile acids. I reiterate that the skin is the largest body organ, and a minuscle flush of 10% of bile acids from skin is bound to definitely provide some noticeable anti-pruritogenic relief.

Odevixibat has orphan designations in both the U.S. and the EU for biliary atresia and PFIC. I invested in Albireo last year mainly due to the pediatric liver therapeutics clinical program. Pruritus remains the most distressing adverse event associated with cholestatic liver disease in pediatric and adult population. The focus on orphan diseases, pediatric and IBAT function are distinct clinical qualities from adult patients focused biopharmas.

Albireo recently initiated a NASH program on elobixibat, an IBAT inhibitor. I recently reviewed the NASH program and not as enthused on that as I am on the rare diseases program. Elobixibat is licensed exclusively to EA Pharma for the treatment of gastrointestinal disorders in Japan and other select countries in Asia (excluding China). Albireo retains commercial rights to elobixibat in the United States, Europe, China. In Q2/2018, Albireo was granted a patent for using elobixibat to treat NASH in both the U.S. and Europe.

The last word from CEO Ron Cooper on biliary atresia:

The unmet need in biliary atresia is significant, data suggest is for number one cause of the transplants in the pediatric population. 80% of those patients require a liver transplant within their first couple of decades of life. So we hope to be able to make a difference with these patients.

I think we're going to be excited to provide some initial data in PFIC and then additional data and other indications to build a very strong brand and a strong pediatric liver franchise with odevixibat.

Presently, the two clinic drugs, ursodeoxycholic acid (UDCA) and ocaliva approved by FDA are used for the adult patients with cholestasis. Making the pediatric patients with orphan and non-orphan cholestatic liver diseases an underserved patient population.

Abireo's forte on therapeutics for pediatric orphan liver diseases should capture a sizeable share of the addressable market due to clinical efficacy and exclusivity. Drugs for orphan diseases are highly priced especially if they are the only effective therapeutic option apart from surgical intervention.

The full-length article was discussed in more depth with members of my private investing community, Liver Therapy Forum

Visit my Landing Page to subscribe to the low price of $32/month or $325 annually.

First Genesis Consulting
2.29K Followers
Starting August 26-2021 I am no longer a Seeking Alpha Contributor.  Please do not follow since there will be no future publication. Thanks for reading!
Follow

Disclosure: I am/we are long ALBO. I wrote this article myself, and it expresses my own opinions. I am not receiving compensation for it (other than from Seeking Alpha). I have no business relationship with any company whose stock is mentioned in this article.

Additional disclosure: As always, my articles are meant to facilitate your understanding. Readers are expected to form their own trading plan, do their own research and take responsibility for their own actions. Investing in common stock can result in partial or total loss of capital. Please implement due diligence and invest wisely.