Covering a company I have never heard of

Being a nutrition and health research junkie for over 25 years and a consultant in funding for fundamental and applied research in health and food (among other areas) for over 7 years, I looked at the statements and numbers of LifeVantage Corp. (NASDAQ:LFVN) with a real curiosity and even excitement. In the end, if the company was last time covered in Seeking Alpha in 2016, it might be worthwhile to clean the dust and look at it from another perspective. Not going to praise or condemn "MLM" programmes here, everybody has their own opinion. Those who were shorting Herbalife (HLF) can only attest that making moral pronouncements does not always make money. So, I dove into reading LifeVantage 10-K, charting, browsing National Center for Biotechnology Information ("NCBI") database, and blogs about bio-hacking. Decision about swallowing this investment pill (pun intended) always belongs to you and shall follow your own due diligence.

The history of the company goes back to 1988, when they incorporated as Andraplex Corporation, changed name in 1992 to Yaak River Resources, Inc., changed it again in October 2004 to LifeLine Therapeutics, Inc., by 2005 bought all of the outstanding common stock of Lifeline Nutraceuticals Corporation, and at last, in November 2006, the final name became LifeVantage Corporation (LifeVantage US). In 2008, their business model shifted from retail to direct sales.

The offer consists of:

Sales of Protandim and TrueScience constitute over 77% of their total revenues.

Among Asia/Pacific and Europe sales, Japan is the biggest market, amounting to 81% of these sales.

Bio-hacking can be considered as a type of activity which aims improving one's biology through supplements, physical and mental practices, equipment supported procedures or self-monitoring. That topic could be a full separate article with dozens and dozens and companies selling pills, liquids, armbands, and apps. What is important to retain for the purpose of this article is that dietary supplements market is not to sneeze at. According to the Grand View Research report on dietary supplements market and forecasts till 2025, the global market size was estimated at $115.06 billion in 2018 and expected to expand at a CAGR of 7.8%. 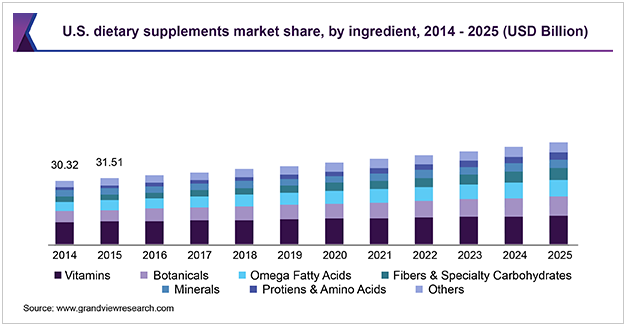 Those who want to achieve a better sports or study performance, or simply lower the chances for some civilization diseases like coronary failures or diabetes, understand very well the need for a miraculous over-the-counter supplement that could somehow protect you, cure you, turn you into a superman/superwoman.

LifeVantage's main product Protandim is marketed as a blend of different compounds, many of herbal origins, that are supposed to activate NRF1 and Nrf2 factors:

"Nuclear Respiratory Factor 1 or NRF1 is a transcription factor that contributes to the expression of many genes required for the maintenance and function of the mitochondria", while

'Nuclear factor (erythroid-derived 2)-like 2, also known as NFE2L2 or Nrf2, is a transcription factor that in humans is encoded by the NFE2L2 gene. Nrf2 is the master regulator of the antioxidant response, which is important for the reduction of oxidative stress." (source: company's 10-K for 2018)

To skip the painful jargon: these factors act on cellular level to make our cells stronger and live longer by more efficiently fighting consequences of unbalanced cellular metabolism, specifically tissue damage caused by reactive oxygen species, which in medical literature is called "oxidative stress". NCBI database has over 350 thousand results mentioning oxidative stress, back to the year 1888.

How effective is their product? Not many reviews found online. However, on Clinicaltrials.gov we can read the updated (Feb. 2019) results of the study of "The Effect of Protandim Supplementation on Oxidative Damage and Athletic Performance", with participation of 19 subjects. Summary says,

"The use of Protandim, a nutritional supplement containing 5 botanicals (Bacopa extract 150 mg; milk thistle 225mg; ashwagandha 150 mg; green tea 75 mg; turmeric 75 mg) has shown promise in an earlier study by reducing oxidative stress and increasing the amount of the anti-oxidant enzymes in the blood."

Online, we can find some heavy criticisms of their another study from 2017 on 46 participants, mostly due to the methodology of testing the effectiveness of Protandim and overall sloppy presentation of results (read an article by a medical doctor Why I was wrong about Protandim).

LifeVantage has patented Protandim® Nrf2 Synergizer, protection lasting until 2025. In 2018, they received another composition patent for additional products within TrueScience line of skin care products, valid until 2036. Of course, the main risk for the company is a huge competition, especially from the big players in pharmaceutical, cosmetics, and food industry.

LifeVantage is a rather small cap, a bit over $160 million. Their stock chart shows many bumps, and it would be difficult to say that it outperforms the market, even though there happened a few short periods of outperformance in comparison to SPY. In the last 10 years, the stock returned 186% vs. SPY's 213%. It translates to 11% of annual return and lots of nails biting.

There happened a couple of events that could explain the ups and downs on the chart. For example, in December 2012, the company had to recall some lots of Protandim Nrf2 Synergizer because there were concerns that some tablets included small metal fragments. They discovered these small metal fragments in certain batches of turmeric extract, an ingredient in Protandim Nrf2 Synergizer, purchased from third-party suppliers.

In 2015, they launched the PhysIQ line, but did not foresee a high demand, which resulted in insufficient inventory. This looks like some weak operational management. Then, in September 2016, an independent audit related to the distribution of products into countries outside the U.S. started. Upon its conclusion, the management admitted:

"... We had a material weakness in our internal control over financial reporting related to our business policies, practices, monitoring and training governing our international business operations, including the sale and distribution of our products in international markets" (source: company's 10-K for 2018).

On top of that, in April 2017, they received a warning from FDA regarding possibly false claims on their website. Upon the response from the company, FDA considered the issue solved. Also, by January 1, 2020, the company will have to re-label their products to comply with FDA's final rule updating the Nutrition Facts label for packaged foods and the Supplement Facts label for dietary supplements (rule from May 2016).

Since the company reached in 2013 level of over $200 million sales, they managed to keep it at a stable level, with an exception for a blip in 2016, as the chart of TTM revenues shows below.

We can also see that they are increasing Book Value Per Share (brown line), despite keeping number of outstanding shares (purple line) pretty stable for the last 5 years. 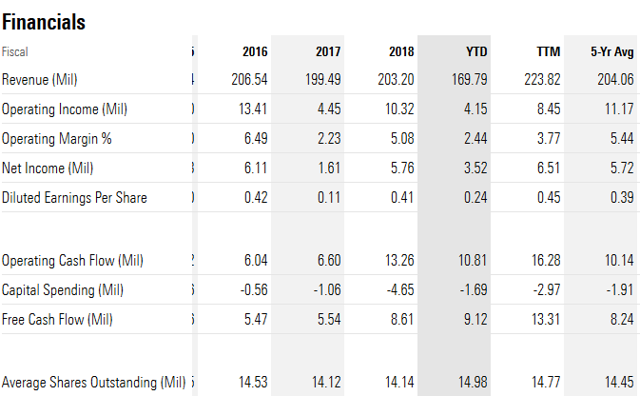 When it comes to the ratios, LifeVantage trades cheaper to its 5-year averages on basis of price to book value and price to cash flow, which are 7.14 and 11.18, respectively, vs. their averages of 15.09 and 12.43, respectively.

This stock popped up on two of my screens at once. So, in the end, it is a mix of EPS growth (272.73% year over year, but with negative growth rates for past 3-5 years), Piotroski F score and low price to sales, which is currently 0.78 (Source: Finviz LFVN LifeVantage Corporation Stock Quote).

If we look at LifeVantage as a business, it looks like a small-cap on the way of turnaround. And, if to believe the decades of financial research which provided us with tools like scores, the company looks pretty good or at least neutral:

How much is LifeVantage worth?

Applying various formulas gives us a huge amplitude of possible fair values, from $1.55 (Tangible book) to $26.38.

I used the Margin of Safety calculator from Phil Town's website RuleOneInvesting.com to calculate how much LFVN should cost now to reach my assumed return. I used the EPS growth forecast of 12% (from Finviz), and I required annual ROI of 10% for next 5 years. The sticker price I received was 10, which is below current stock price. I might be recommending to rather consider entering at dip to 10 or slightly below, as long as fundamentals are not dropping.

I understand that, with dietary supplements, it is really difficult to show investors a tangible value proposition. Improvement of our molecular health is quite difficult to grasp. But we need to understand that searching for the fountain of youth is in our nature, and people pay for these sorts of promises, even though the benefits are probably rather a result of an overall healthy-ish lifestyle than of one supplement. I am not saying that this or another scientific back-up behind a supplement is better or worse. The warning from FDA must have shaken the management up a bit too, at least to mind your words in claiming the benefits. But if we look objectively at the recent results of LifeVantage, we should consider the opportunity laying in the further expansion of international sales. I would consider only a small position in LifeVantage due to dependence on two lines of products and possible headwinds related to food and drug regulations in various markets.