Just six months ago, in December, a similar five-year TIPS reopening went off with a real yield of 1.129%, a whopping 98 basis points higher than Thursday's result.

In light of these uncertainties and muted inflation pressures, the Committee will closely monitor the implications of incoming information for the economic outlook and will act as appropriate to sustain the expansion ...

The Fed's statement Wednesday has caused a quick decline in both real and nominal interest rates. The yield on a nominal 10-year Treasury today fell below 2.0%, 66 basis points lower than where it began the year.

So for investors, today's TIPS auction had to be a disappointment, with the real yield (meaning yield above inflation) dropping from about 0.35% last week to 0.152% today.

A TIPS is an Treasury investment with a coupon rate that is well below that of a nominal Treasury of the same term. But with a TIPS, the investor's principal balance is adjusted up (or sometimes down) each month to match U.S. inflation. The "real yield" of a TIPS indicates the amount investors will earn above inflation.

CUSIP 9128286N5 carries a coupon rate of 0.50%, which was set at the originating auction on April 18. So, because today's auctioned real yield was well below the coupon rate, investors had to pay a sizeable premium, an adjusted price of about $102.96 for about $101.27 of principal, after accrued inflation is added in (This TIPS will carry an inflation index of 1.01271 on the June 28 settlement date).

This chart shows the dramatic decline in real yields in 2019 for a full-term five-year TIPS, as estimated by the U.S. Treasury. Note, however, that today's auction result was much lower than reflected in the June 18 closing data for this chart (0.152% versus 0.34%, a drop of nearly 19 basis points).

Here is the year-to-date trend for the five-year inflation breakeven rate, showing the dramatic decline in inflation expectations in recent months. This chart's data doesn't include the uptick after the Federal Reserve's announcement Wednesday.

The "traditional" view is that monetary easing by the Federal Reserve, along with any sort of stimulus measures, are bullish for TIPS, because they spur fears of future inflation. That's why TIPS ETFs and funds had a booming performance from 2011 to late 2015, before the Fed began backing off from stimulus. I think investors will be more wary this time around, because the 2011-2015 easing had little effect on U.S. inflation. Nevertheless, I'd expect inflation expectations to rise off today's very low levels.

Reaction to the auction 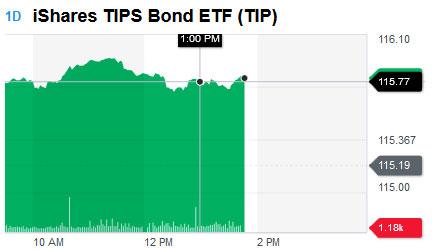 The TIP ETF - which holds the full maturity range of TIPS - had been trading higher all morning in the aftermath of the Fed's statement Wednesday. Its price barely budged after the 1 p.m. close of this five-year TIPS reopening. So it appears that the lower yields had already been priced in, and the auction went off as expected.

The Treasury market overall, however, appears to be in turmoil. I said in my preview article on this auction that it would "reset" the market, and the market is clearly pointing to lower yields ahead. But is the sudden decline in yields an overreaction to a future move the Fed has been signaling for several months?

Falling yields have caught nearly everyone by surprise. In January, none of the 69 economists surveyed by The Wall Street Journal predicted yields would fall below 2.5% by June. The average forecast was about 3%, indicating bonds would have a modest selloff by now. Instead, the Treasury yield, which moves inversely to prices, was recently at 1.98%, the lowest since late 2016.

Here are the results for all four- to five-year TIPS auctions since 2014, showing several auctions with real yields below zero: 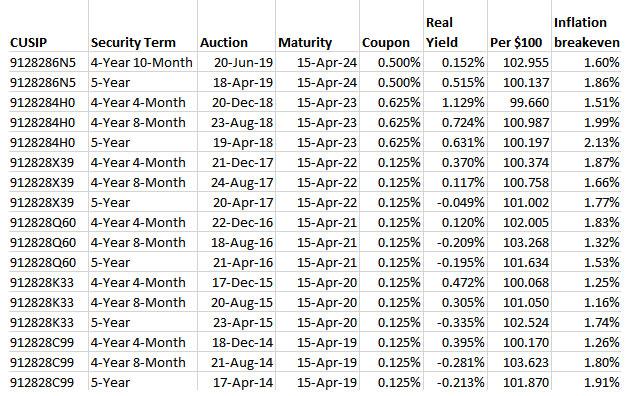 Additional disclosure: David Enna is a financial journalist, not a financial adviser. He is not selling or profiting from any investment discussed. The investments he recommends can be purchased through the Treasury or other providers without fees, commissions or carrying charges.