Tuesday June 25: Five things the markets are talking about

Global equities were under pressure in the overnight session, along with US stock futures as geopolitical events continue to fester ahead of this week's main event, the G20 sit down in Osaka, Japan. The 'traditional' safe haven trade strategy continues to dominate - sovereign yields are lower while gold and yen remain better bid.

The recent G7 central bank market rally is stalling as the market does not seem that confident of a Trump/Xi Jinping trade break through at this week's G20 gathering. Coupled with Iran suggesting that Trump's new sanctions, delivered Monday, has closed off any diplomatic solution to their dispute has managed to push gold prices to new eight-year highs, US 10-year yields towards +2% and yen again a favorable trade.

Expect the market to closely watch Fed Chair Powell today at 1:00 pm ET, who is due to speak about the economic outlook and monetary policy at the Council on Foreign Relations, in New York. Audience questions are expected.

Déjà vu, Boris Johnson, the favorite to become the next UK PM, said he will seek a new Brexit deal with the EU, but if they refuse his demands then he will lead the UK out without agreement on Oct. 31.

On tap for this week: The Group of 20 summit is in Osaka, Japan on Friday and Saturday. Reserve Bank of New Zealand (RBNZ) monetary policy announcement (June 25).

In Japan, equities retreated overnight on the back of a stronger yen (¥106.77) trading at six-month highs outright and geopolitical worries. The Nikkei ended the day down -0.43%, while the broader Topix was -0.27% lower.

Down-under, Aussie shares closed slightly lower overnight in thin trading as caution prevailed ahead of a meeting between Trump and Xi Jinping this week. The S&P/ASX 200 index slipped -0.11%. In S. Korea, the Kospi stock index shed early gains to end lower as investors kept to the sidelines ahead of Sino-US trade talks.

In Europe, regional bourses trade mostly lower in a quiet session thus far, tracking a mixed session in Asia and slightly lower US futures. Geopolitical tensions remain to the fore. 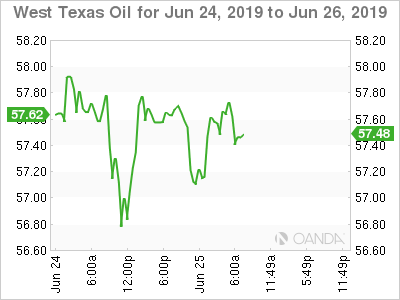 Oil prices are feeling the "push, pull factor" - concerns over declining crude demand are being offset by risks to supply linked to new US sanctions on Iran.

Crude 'bears are finding support from a number of sources, first, a comment from a senior US official indicating that US President Trump was "comfortable with any outcome" from the US/China G20 trade talks this weekend. Also, helping their cause is weak manufacturing data released yesterday by the Federal Reserve Bank of Dallas.

However, the crude 'bulls' point to the geopolitical risk premium in the Middle East to support higher crude oil prices.

The market is also waiting for the OPEC+ meeting where members will decide whether to extend a supply reduction pact that ends this month. Last week, OPEC agreed to move its next meeting to July 1, followed by a meeting with non-OPEC allies on July 2, while the joint technical committee will meet June 30.

Ahead of the US open, gold prices have climbed to a six-year high overnight, as the 'big' dollar slipped to a multi-month low across the board and geo-political Middle East tensions lifted the appeal for the safe-haven metal. Spot gold is up +0.9% at +$1,431.93 per ounce and is heading for a sixth consecutive session of gains and has rallied nearly +10% in June. US gold futures have jumped +1.3% to +$1,436.20 an ounce. 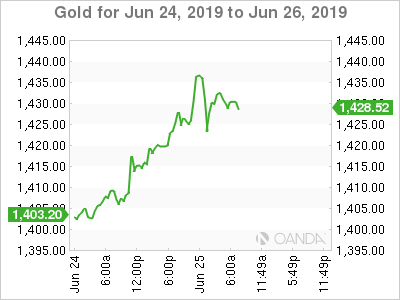 3. Yields on the move lower again

Already this month, dealers' expectations that the European Central Bank (ECB) will embark on a rate cut in the coming months have driven German and other eurozone government bond yields to or near record lows.

The markets focus now shifts to today's speech by Fed Chair Powell (1:00 pm ET), who is coming under strong pressure from US President Donald Trump to cut rates sharply. The market is looking for signs on how much US policymakers will cut rates by next month, particularly now that Trump has upped his criticism of the central bank, saying it "blew it" in June.

Note: Currently, the market is pricing in a -25 bps cut by the Fed, and will be keeping an eye on a possible -50 bps cut. 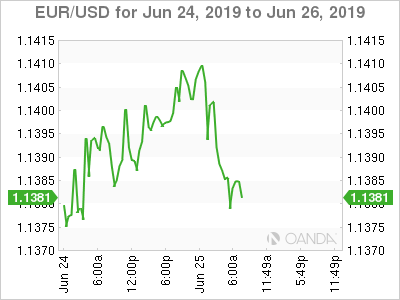 EUR/USD earlier rose to its highest in nearly five months at €1.1415, having shrugged off Monday's weak German Ifo data. The techies say a rise above €1.1450 with some conviction should open the way for the 'single' unit to break above €1.15 handle. Currently, USD 'bulls' require some unexpected and very strong US data to help their plight - US fixed income dealers are pricing a +100% probability of a rate cut at each of the remaining Fed meetings in 2019.

JPY has been the main beneficiary of safe-haven flows with USD/JPY testing new five-month lows below the ¥107 level at ¥106.77

And Bitcoin (BTC) is on the rise again, breaking back above $11,000 and printing new 2019 highs - it's up +47% from its lows earlier this month. BTC's rally has gained steam in recent weeks as excitement builds about Facebook's upcoming launch of its own cryptocurrency called Libra. Investors are optimistic it will be the first digital currency to truly go mainstream. 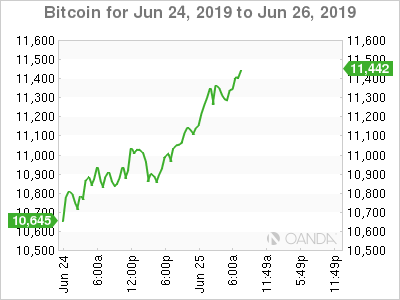 Boris Johnson, the favorite to become the next UK PM, said he will seek a new Brexit deal with the EU, but if they refuse his demands then he will lead the UK out without agreement on Oct. 31.

Johnson's pledge to leave the EU without a deal could provoke a standoff with the British parliament which has indicated its opposition to a 'no-deal' exit.

Note: A 'no-deal' scenario means there would be no transition period so the exit would be abrupt - this would be the nightmare scenario for many business leaders and the dream for hard Brexiteers who want a decisive split.

In an interview with BBC, Johnson said he did "not want a no-deal Brexit, but that it was necessary to put it on the table so that Britain could get the result it wanted." 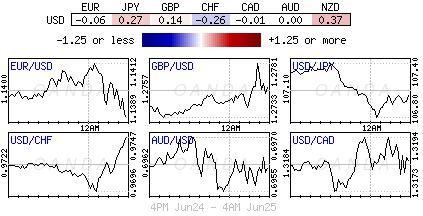