MedMen Enterprises (OTCQB:MMNFF) has for months seen its narrative dominated by talks of its impending death, and its zeitgeist characterized by extreme negativity not applied to other companies in the space. However, the company's latest results signify the start of a new dawn as it finally shows a clear route to the operational leverage increasingly demanded by cannabis investors.

MedMen is not building the Apple of cannabis; it is building the MedMen of cannabis. A brand that will come to possibly dominate the North American cannabis market. As investors increasingly realize US cannabis retailers will be where the most value is created in the coming years, and that MedMen is taking on heavy early losses to build the foremost cannabis retailer, I'd expect the sentiment towards the company to improve. It is still early days in the buildout of its fledgling moat, but tomorrow is sure to be brighter than today.

What we do know as fact is MedMen is one of the highest revenue-generating companies in North America. The company's recently released results for the third quarter of its 2019 fiscal year show the replacement of its ex-CFO as a prudent decision. Michael Kramer, MedMen's new CFO, has ambitions to slash costs and move the company to a more sustainable path. 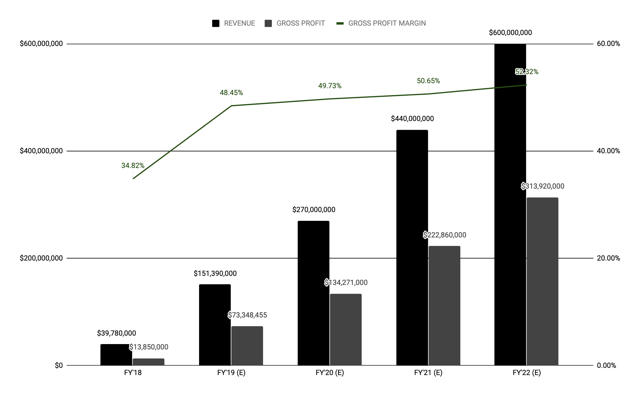 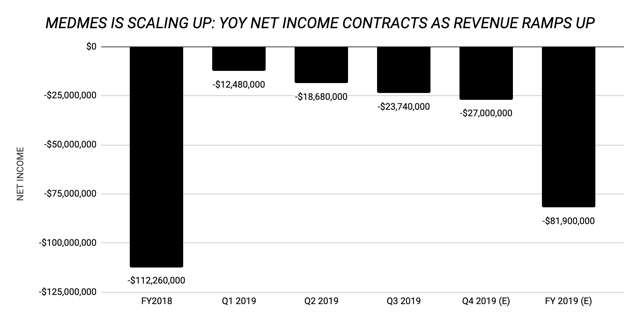 I expect MedMen's net loss to contract from the $112 million realized in FY2018 to $81.9 million in FY2019. While still high, the decrease in net loss as a percent of revenue shows MedMen is increasingly becoming cognizant of the need to show its ability to scale.

There is currently a substantial differential in valuation between the Canadian LPs and US cannabis retailers. The reason for this is two-fold. Firstly, the Canadian companies are listed on official US exchanges with wider investor bases compared with the OTC and CSE listing of MedMen. Secondly, while the Canadian cannabis market is far smaller than the US, the Canadian LPs have done a great job at branding themselves as global cannabis companies. 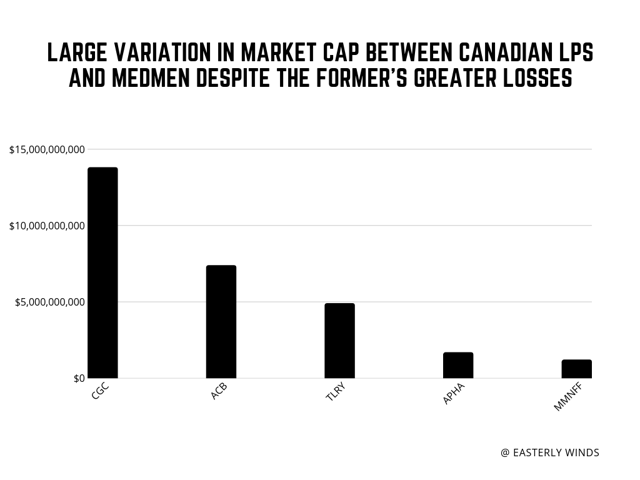 MedMen is the lowest valued company despite losing less money and despite generating significant revenue which saw a QoQ increase of 22% and YoY growth of 155%.

The arguments that MedMen deserves to trade lower because it loses money either has to be extended to the Canadian LPs or it begins to have less weight.

While I expect the bullish narrative presented in this article to come to represent MedMen's future, it does face some risk. Indeed, in my open letter to MedMen, I mention the negative impact cumulative lawsuits have had on the company. That is the lawsuit from its ex-CFO, the Inception Companies (an early MedMen investor), and a further lawsuit from former MedMen employees.

MedMen will need to crush this tripartite to further realize the improved sentiment needed for its shares to move higher.

One of three was addressed a few weeks ago when the Inception Companies dropped its lawsuit against MedMen. As a result, the specter of a negative material financial impact on MedMen is removed.

MedMen now needs to move to crush the last two lawsuits preferably before year-end to shape 2020 as one where it truly becomes the New Normal.

Not Just A Flex

MedMen offers the best cannabis brand in an industry where every other incumbent flexes their "leading brands" in name only. The company's concentration of stores in great locations, first mover marketing spend, and rollout of its higher-margin own brand products has placed it on a path to having a significant and perhaps profitable presence in California and the USA, the largest and most important global cannabis markets.

The potential from this is tremendous; future international franchising opportunities at marginal cost in the decade ahead if and when new international markets open up, as well as a greater command of price inelastic international tourists visiting the Golden State. 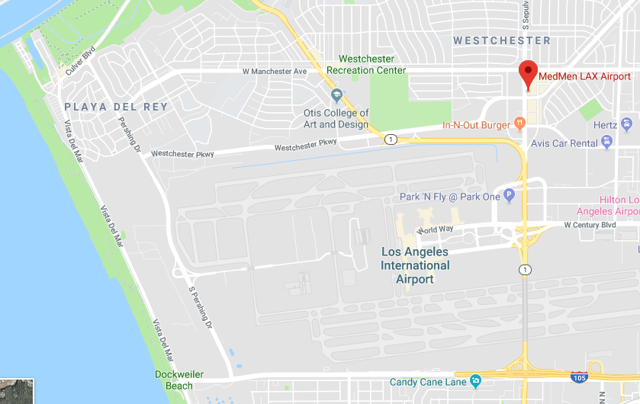 MedMen undoubtedly had a torrid start to its future. This stemmed from the combination of lawsuits, high cash burn, and a deluge of negative coverage. However, the current MedMen zeitgeist stands at the cusp of disruption. A narrative that for far too long has been controlled by the bears is about to collapse and give way to one of fledgling optimism of a bright possibly MedMen dominated future.

Leo Imasuen
4.95K Followers
The equity market is an incredibly powerful mechanism as daily fluctuations in price get aggregated to incredible wealth creation or destruction over the long term. These two polarising forces lay at the core of my stock coverage. The aim is to avoid wealth destruction and embrace wealth creation. Not an easy feat, but one achieved from my radical obsession with achieving superior financial returns and built on my background in finance, accounting, and economics.
Follow

Disclosure: I am/we are long MMNFF. I wrote this article myself, and it expresses my own opinions. I am not receiving compensation for it (other than from Seeking Alpha). I have no business relationship with any company whose stock is mentioned in this article.