About four months ago, I published my last article on CVS Health Corp. (NYSE:CVS). The stock was trading at a similar level as right now. In the months before, the stock dropped pretty quickly from about $80 to $52 and is since then trading more or less at that level and even positive quarterly results didn't lead to a turnaround in the stock price.

For several months, CVS traded in a very small range between $52 and $57 and impulses to drive the stock price higher again (or maybe even lower) have been missing. Before CVS will report its quarterly results next week (on July 8th) and might get impulses again, that will lead the stock higher or lower, we will take a closer look at the company and the stock.

As I have already written in the last article, I think CVS is severely undervalued. The main reasons for the depressed valuation, in my opinion, are the high levels of uncertainty and the high debt levels CVS has to deal with (among some other aspects).

A big concern right now for CVS is US District Judge Richard Leon in Washington, that must finally authorize the decision under the Tunney Act and the judge signals broad anti-trust concerns. The Justice Department demanded that Aetna already divested its Part D business before approving the merger last year, but there are still concerns that CVS might become too powerful and end up in a position where it can set prices because of missing competition.

CVS Health - along with Express Scripts (ESRX) and Optum - is controlling 70% of the Medicare prescription drug market nationally, and we, therefore, have three very powerful players in the healthcare sector: Optum is owned by UnitedHealth (UNH) and Express Scripts is owned by Cigna (CI) - two large companies and big players in the United States healthcare market. Currently, there is a huge concern that further concentration might lead to higher prices as well as premiums the customers have to pay. Diana Moss, the president of the American Antitrust Institute, testified that "premiums will increase as a result of consolidation" and expressed concerns about the CVS and Aetna merger. She also advised that it is sometimes most effective to block a merger. Dr. Neeraj Sood, an economist that testified for the American Medical Association also expressed significant competitive concerns as a consequence of the merger. He also explained that there would be far less competition and the pressure - especially on low-income patients - could be immense. 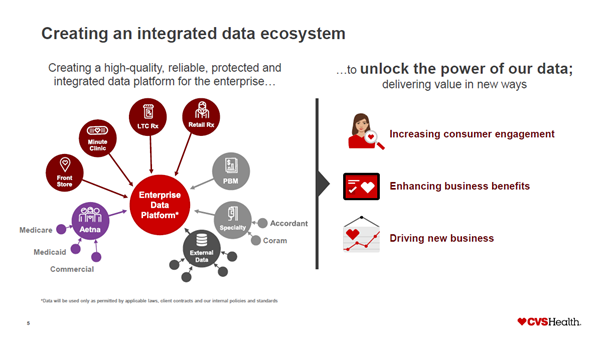 It is true that CVS is creating an integrated data platform and an integrated data ecosystem and is combining front stores, MinuteClinics, and the retail business, with pharmacy benefit management, external data, and also Aetna's business. From the standpoint of an investor, this is positive as it creates a powerful moat around the business.

But it remains unclear if the judge can actually stop the CVS-Aetna deal as the two companies are already operating as one company for several months. CVS has already sold the assets the Justice Department required it to divest. There are several voices claiming that the merger can't be blocked anymore, but the uncertainty remains and it probably will be a huge relief for CVS and its investors when there is finally a decision.

The same day, judge Peon held his hearings, CVS held its annual investor day and provided information on how CVS will transform in the next few years and reach double-digit growth again. CVS wants to create the most consumer-centric health company, which has not only a recognized and trusted brand but also a deep local footprint and which will become a powerful healthcare decision-making engine informed by data and analytics. Management wants to achieve medical cost savings, membership growth, expanded use of CVS's assets (like the pharmacy or MinuteClinic), and open platforms and new businesses (based on data and analytics products). 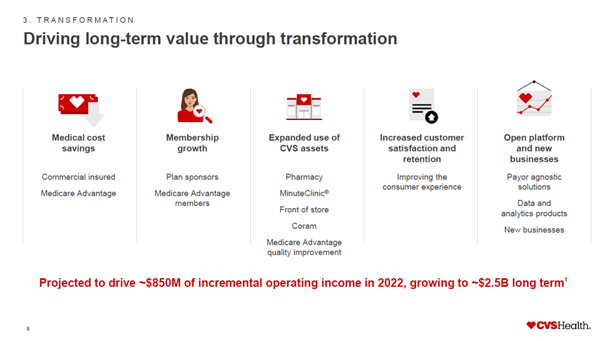 CVS sees itself uniquely positioned among managed care peers as the company not only offers medical and pharmacy benefits but also retail pharmacies as well as retail clinics. And while CVS will not really expand its HealthHubs in 2019 (so far, CVS is testing the concept in three stores and is expecting to expand to four HealthHubs at the end of 2019), management is expecting that it will have opened 1,500 locations by the end of 2021. According to surveys by CVS, the customer satisfaction and customer experience improved by the HealthHubs. When looking at the numbers, CVS is certainly well positioned and was growing much fast than the industry. In 2018, CVS grew about three times faster than the industry, and over the last few years, CVS has increased its pharmacy retail share from 23.5% at the beginning of 2017 to 26.3% right now. 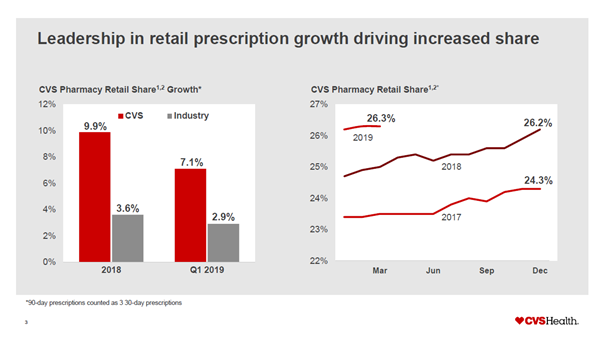 CVS also seems to be on track to reduce the levels of outstanding debt, and for 2019, management expects about $9.8-10.3 billion in net cash provided by operating activities and about $4.2-4.6 billion should be available for debt repayment. As originally planned, the leverage ratio should be between 3.0 and 4.0 in 2021, and in 2022, the leverage ratio should be close to 3. CVS is also expecting to save about $900 million in integration synergies and about $1.5-2.0 billion in savings from enterprise modernization (i.e. technology enhancements or productivity improvements) from 2022 going forward.

Over the long term, CVS assumes that from 2022 going forward, there will be about $10-12 billion in cash available annually for enhancing shareholder value in the long term. In 2022, earnings per share should be at least $8.00 (according to different estimates) and when the company would pay out about 30% of its earnings as dividend (as it did in the past), a 20% dividend increase could be possible. And as the company currently only needs $2.6 billion for dividend payments, there is a lot of room to not just increase the dividend but also restart the share buyback program. 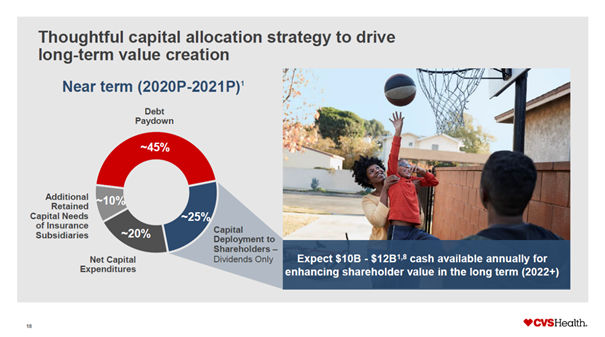 When looking at the daily chart and the price action during the last few months, we see that the stock sold off pretty quickly after the merger between CVS and Aetna was completed in November 2018 and dropped from $80 to about $52. The stock price seems still well supported around $52, but the stock also hasn't managed to break out to the upside. And considering the lower highs the stock has set since March 2019, it would not surprise if CVS would break through the support level once again and we see stock prices below $52.

I also assume that the next major move (upwards or downwards) might be news-driven. We will either see a break-out above the declining trend line (dotted green) or a further decline breaking through the red line. If Judge Leon should block the merger, I wouldn't be surprised if the stock sees a major one-day drop and a close below the red line. In my last article, I suggested it might be possible that the stock will drop to $48 or maybe even to $40. Although the last number might seem rather unrealistic, it could happen for example if the ruling of Judge Leon catches investors on the wrong foot or in case of a short-term panic.

But the stock behavior in the short-term doesn't matter much. Over the long term, I am confident we will see higher prices as the stock is deeply undervalued right now - probably because of the high levels of uncertainty surrounding the stock and the company. In my last article, I calculated an intrinsic value of $52, and for that calculation, I assumed that CVS won't be able to grow its free cash flow ever again (using a 10% discount rate). And although CVS expects only moderate growth for the next three years, it seems totally unrealistic that CVS won't be able to grow its revenue and free cash flow in the future years. For 2022 and the following years, CVS is even expecting double-digit adjusted EPS growth again. 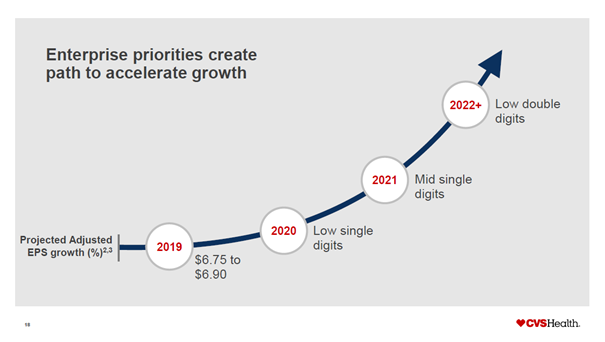 CVS is presenting an astounding asymmetry: Almost everybody (i.e. management or different analysts) is confident that the company can report high growth rates over the long term (maybe even double digits), but the stock is trading at very depressed levels and doesn't reflect the growth expectations at all.

In July, there are two important dates where the stock might gain momentum, and we see a news-driven break-out of the current range. On July 8th, the company is reporting quarterly earnings and either a surprise or a disappointment might move the stock. And finally, somewhere near the end of July, the judge ruling might also move the stock quite a bit.

In my opinion, investors might win either way. If the merger is blocked, it will be messy for CVS for a few quarters, and we really don't know what will happen, but as CVS is extremely undervalued and will be able to restructure or repay the massive amounts of debt (which is a major concern), it might also be positive for the company. And when the merger is approved, one major uncertainty has gone away limiting the reasons to give CVS such a depressed multiple right now.

If you enjoyed the article and like to learn more about wide moats, please check out my marketplace service: Moats & Long-Term Investing.

Subscribers get access to extensive background information on wide-moats, at least weekly exclusive research, a watchlist of wide moat companies and a chatroom where members can ask questions and exchange opinions about long-term investing and companies with a competitive advantage.

For investing in companies that can beat the market over the long term and create a portfolio with companies you can (almost) hold forever, please check out my marketplace service. You can also take advantage of a free trial offer.

Daniel Schönberger
10.23K Followers
Part-time investor and contributor for Seeking Alpha since 2016. My analysis is focused on high-quality companies, that can outperform the market over the long-run due to a competitive advantage (economic moat) and high levels of defensibility. Focused on European and North American companies, but without constraints regarding market capitalization (from large cap to small cap companies). My academic background is in sociology and I hold a Master’s Degree in Sociology (with main emphasis on organizational and economic sociology) and a Bachelor’s Degree in Sociology and History.I also write about investing, economy and similar topics on Medium: https://medium.com/@danielschonberger

Disclosure: I am/we are long CVS. I wrote this article myself, and it expresses my own opinions. I am not receiving compensation for it (other than from Seeking Alpha). I have no business relationship with any company whose stock is mentioned in this article.