Shares of ArQule (NASDAQ:ARQL) have risen by over 50% since my last update piece stated it remained a Buy with substantial upside ahead over the long term. Readers may be tempted to take full profits on the name considering the high appreciation that's taken place recently. However, when thesis strengthens substantially as it has here, a case can be made that patience leads to maximizing profits.

My present goal is to revisit the name given that I still believe significant upside potential exists in the near to medium term. 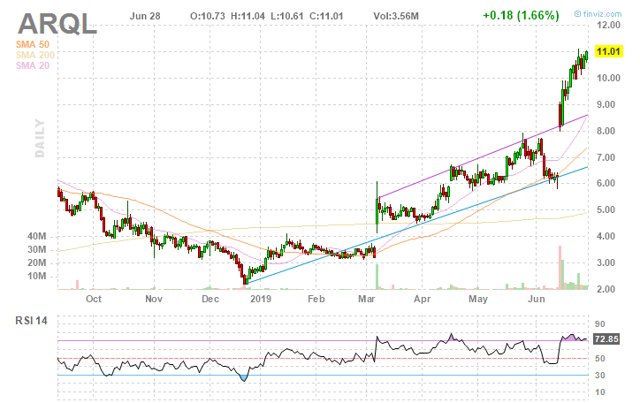 When looking at charts, clarity often comes from taking a look at distinct time frames in order to determine important technical levels to get a feel for what's going on. In the above chart (daily advanced), we can see June's gap up after very promising news for noncovalent BTK inhibitor ARQ531 was reported at EHA (European Hematology Association) annual meeting. In ROTY's Live Chat (and on Twitter), I pointed out that the stock's strength into and after the secondary offering at $9.75 was a green flag, a buy signal showing substantial demand for shares and near term upside still in the cards.

In recent update article, I touched on the following keys to the bullish thesis:

On June 14th the company announced preliminary results from the dose escalation study for ARQ531, its dual inhibitor of both wild type and C481S-mutant Bruton's tyrosine kinase or BTK. Robust, dose-dependent, anti-tumor activity was observed. ORR of 66% was observed in heavily pretreated R/R CLL patients, all with the BTK-C481S mutation, from cohort 7. A partial response was observed in the first patient with Richter's Transformation, who had progressed on ibrutinib and R-CHOP, suggesting that ARQ 531's distinct MOA is amenable to target this unmet medical need (quick path to market). A Follicular Lymphoma patient remains a confirmed PR and has been on therapy approximately two years, providing initial insights into long- term safety as well as durability of response. 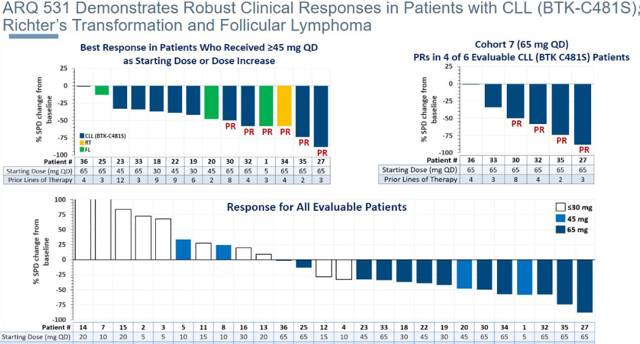 I also thought that an Evaluate article on the company's turnaround was well-written, reminding us that AbbVie paid $21 billion for 50% rights to Pharmacyclics ibrutinib. ArQule increasingly looks like a valuable bolt-on acquisition due to ARQ531's potential in patients who relapse on Imbruvica or Calquence with the C481S mutation. Additionally, I hadn't considered the possibility of all patients eventually being started on a non-covalent drug.

When the investment thesis strengthens substantially like it has here, I remain patient as it plays out.

The company also announced that it presented preliminary results from its phase 1/2 study of pan-AKT inhibitor, miransertib (ARQ 092), in patients with PIK3CA-related Overgrowth Spectrum (PROS) and Proteus syndrome (PS) in an oral presentation at the European Society of Human Genetics Conference. Recommended initial dose for registrational study was defined as 15 mg/m2 QD with subsequent maximum dose increase to 25 mg/m2. Safety profile appeared solid with mostly Grade 1 or 2 adverse events (in patients as young as 2 years old). Improvement in diseases related symptoms and performance status (measured by Karnofsky/Lansky scale) was reported in the majority of patients, with most demonstrating improvement or no disease progression extending beyond 1 year on treatment.

Later in June the company pulled off a great financing with secondary offered at a very slight discount (suggests strong demand). The financing consisted of 9.25 million shares sold at $9.75 per share for gross proceeds of $90.2 million (plus underwriter allotment of 1,387,500 shares). I pointed out in ROTY Live Chat and on Twitter that the lack of selling pressure spoke volumes in regards to near term upside (a significant green flag).

In the associated regulatory filing, the company confirmed that patient 30 from cohort 7 (one of 4 CLL patients with C481S-mutation who responded), received a second scan and was confirmed as a responder after five cycles of treatment. 5 patients have been enrolled in the 8th cohort (75 mg QD), with the first one (DLBCL) achieving a partial response and remaining on therapy. Clinical activity data is awaited on the remaining patients (4 of 5 were dose reduced to 65 mg QD or Cohort 7 dose due to grade 2 adverse events). One of five patients discontinued treatment and was not evaluable.

Near term, the company will establish a recommended phase 2 dose and begin enrolling expansion cohorts with registrational intent in patients with C481S mutation and potentially those with Richter's Transformation if further data supports it. The company will also be going after other indications where irreversible BTK inhibitors are not highly effective.

As a reminder, for the first quarter of 2019 the company reported cash and equivalents of $92 million as compared to net loss of $10.2 million. Research and development expense rose to $7.4 million, while G&A rose to $4.3 million. Management was guiding for year end cash balance of around $60 million. However, now that they've conducted a successful secondary offering the operational runway has been extended significantly.

To conclude, the thesis continues to strengthen for this targeted oncology idea as clinical results presented at EHA confirm the efficacy and safety of ARQ531 along with its potential in treating patients with C481S mutation and potentially those with Richter's Transformation. The burden of proof is on the company at this point in regards to duration and successfully running expansion cohorts to replicate data in a larger number of patients. Other value drivers such as its rare disease program and AKT inhibitors (data coming 2H 2019 for miransertib phase 1b cohorts and ARQ751 phase 1b cohorts) provide us additional reasons to positive on this name.

For readers who are interested in the story and have done their due diligence, I suggest initiating a pilot position and accumulating dips.

Time Frame For Upside is 6 months, as we get updated data at ASH in December for ARQ531 and updates on other assets in the pipeline.

Risks include setbacks in the clinic (all eyes will be on durability and tolerability profile for ARQ531), disappointing data, negative regulatory feedback regarding pathway to approval and competition (other noncovalent BTK inhibitors in the clinic such as Sunesis Pharmaceutical's vecabrutinib and Eli Lilly's LOXO-305). Dilution in the near term does not appear likely given current burn rate and recent financing.

I greatly appreciate you taking the time to read my work and hope you found it useful. Consider clicking "Follow" next to my name to receive future updates and look forward to your thoughts in the comments section below.

As a reminder to all my readers, changes to pricing for ROTY will take place July 8th. Please see my related post for specifics and to decide whether it makes sense for you to take advantage of legacy pricing before.

We are a unique 500+ member community of experienced biotech investors, profitable traders, industry veterans and novices. Our group is known for its pursuit of profits, continuous improvement and generous sharing of due diligence & knowledge.

Founder of ROTY (Runners of the Year), a 600+ member community of biotech investors & traders focused on the intersection of value and accelerating clinical momentum.

Disclosure: I am/we are long ARQL. I wrote this article myself, and it expresses my own opinions. I am not receiving compensation for it (other than from Seeking Alpha). I have no business relationship with any company whose stock is mentioned in this article.