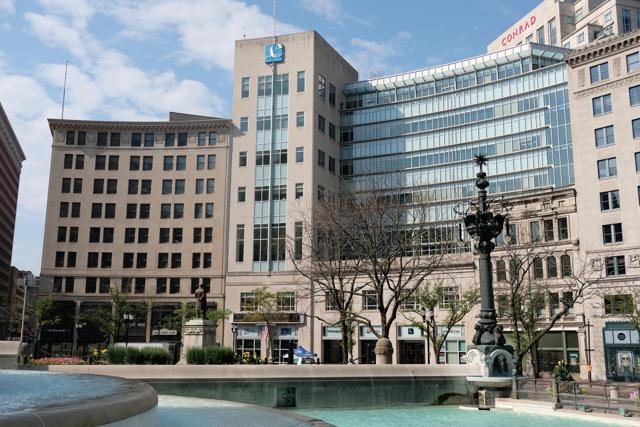 Emmis Communications (OTC:EMMS) has seen the writing on the wall. Terrestrial radio (over the air) is in a slow secular decline with the proliferation of streaming and other music services such as Sirius, Spotify, Apple Music, Pandora and many others. Over the past two years Emmis has been selling off its radio stations. Surprisingly, prices received have been well above expectations, often at 10x or more times cash flow. For a full background on Emmis, its management, and a prior sum-of-the-parts (SOTP) calculation please read Tim Stabosz's article from September 2017.

Tim estimated a sum-of-the-parts calculation at $11-12. Since then, most of the radio stations have been sold or placed under contract to sell at prices well above his estimates, which were conservative. A listing of these sales is below.

(1) Includes a 23.7% interest in Mediaco valued in the next table. Source: Emmis news releases and 8-K filings.

The company has not purchased anything with the proceeds yet but plans to redeploy the money received into new undefined ventures. After the pending sales it will have significant net cash on its books. It has six radio stations remaining, 4 in Indianapolis and two in New York City. I expect them to keep the Indy stations. My reason for this is they signed an agreement to manage the New York stations just sold indicating they want to keep a reduced exposure to the radio business and Indy is their home town. I expect the two New York City stations to be sold. One is leased to ESPN for about $10 million a year through 2024. This makes it very marketable due to the income stream that could bring in non-radio investors. I expect it to be sold as it is more of an investment than an operating asset. The final station is a small New York City AM station.

I have performed a sum-of-the-parts calculation below based on the pending sales, the expected ESPN station sale and the remaining assets. 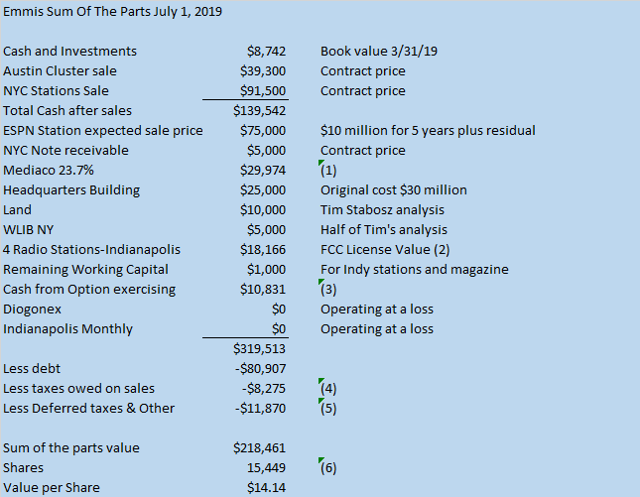 Based on the calculations above, I expect Emmis to have $125 million in cash after paying off all debt, once the two pending sales and the ESPN station is sold. This is in addition to the Mediaco asset (23.7% of WBLS and WQHT of New York City) management plans to sell to shareholders. Emmis is also trying to sell the land and WLIB but that may take longer. Fortunately, taxes on the sale of the assets expected to be sold is low due to their large, mostly intangible, carrying costs. Note the Mediaco asset could be less if it has debt.

The biggest risk here is management does bad deals in acquiring into new industries they have little experience with. However, with a current market cap of $74 million on July 1, 2019, the deals would have to be really bad.

Another risk is they receive less than $75 million for the ESPN station but I believe my value is conservative based on the $10 per year scheduled to be received from ESPN the next five years.

It should be noted that after the pending and expected sales, the company will likely be operating at a small loss until the cash is redeployed. Operating assets will be down to the four Indy stations, a money losing magazine, Diogonex a small but growing business which also loses money, and the small New York AM station.

Emmis is mostly through changing itself from a radio station company to a blank check investment company. It should have at least $125 million in cash to invest plus significant real estate and smaller operating assets. In addition, shareholders will receive 23.7% of Mediaco, a to be publicly traded operating company consisting of two of New York City's most popular radio stations. An additional large cash dividend is also very possible. More money may come in if they can sell the land and the New York City AM station. I don't expect them to sell their headquarters but that is always possible. It is located on Monument Circle, the best possible address in Indianapolis, and cost $30 million to build 21 years ago.

A sum-of-the-parts calculation generally shouldn't be given much weight. However, when a company is actively monetizing its assets it becomes the most important valuation metric. As of July 1, 2019, Emmis had a market cap of $74 million or $5.67 per share. The SOTP shows a value of $14.14. Since companies tend to trade at a discount to SOTP values, my price target is $11.

Jeremy Blum
6.92K Followers
I was the Credit Manager for a mid-sized publicly traded bank and retired early in 2013. Despite never working in the industry, I took and passed the CFA Level 1 exam. I usually only write about companies that are my best ideas and I have a position in. I traditionally have invested in and written about small and micro cap deep value stocks. As an investor you can get an edge in researching and talking to management of small and micro cap companies that have little or no analyst coverage. About 50-75% of my portfolio are deep value stocks, primarily microcaps. That is historically where I have had the best returns.  Tipranks.com currently has me ranked in the top 1% of all Seeking Alpha and similar sites writers.

Disclosure: I am/we are long EMMS. I wrote this article myself, and it expresses my own opinions. I am not receiving compensation for it (other than from Seeking Alpha). I have no business relationship with any company whose stock is mentioned in this article.