What is increasingly like a housing bust now has residential construction spending falling at near-double digit rates for the first time in almost ten years.

Dating back to last November, mortgage rates, like bond yields, have been steadily falling.

The employment market - at least by way of tax receipts and home building - is not, cannot be, at all what the unemployment rate says.

This is serious economic distress being indicated by some fundamental economic properties, and that's why it wouldn't matter what the mortgage rate was or was doing.

It was supposed to be the Chinese government that was going to rescue the global economy. Once the rationalizations ended and officials around the world realized there was serious economic weakness building at the end of 2018 instead of a globally synchronized inflationary recovery, the green shoots of 2019 were going to be in one big part a fiscal stimulus boost.

It didn't happen over in China. From PMIs to FAIs, the Communist government remains largely absent. That's the difference with "managed decline."

With the Chinese on the sidelines, other governments are picking up the pace. In this one case, there is no obvious reason why. I doubt it is intended stimulus. Regardless, US state and local governments are absolutely binging, spending on construction projects at a breakneck pace. 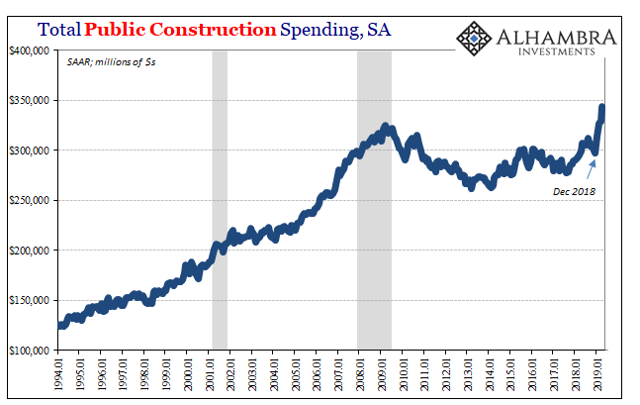 Perhaps local officials are more optimistic than the bond market, taking cues from the NYSE. Then again, if tax collections are an indication, you'd think they would be more cautious (more on this later).

In the end, though, it may not matter why. For all the euphoria among municipal construction projects, it is nowhere near enough to offset growing weakness in the private economy. Total construction spending is heading lower. 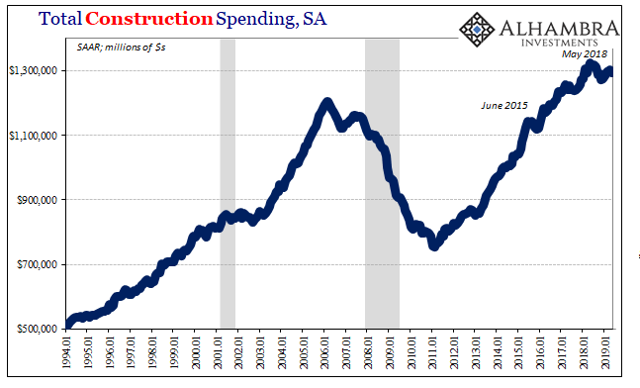 It only starts with capex. Though the economic condition has been described as some kind of boom (if not epic boom) for several years, for reasons no one in the financial media appears willing to investigate, companies just haven't spent like that was ever the case. Private non-residential construction spending has been largely sideways this whole time.

In a non-linear world, sideways is contraction. 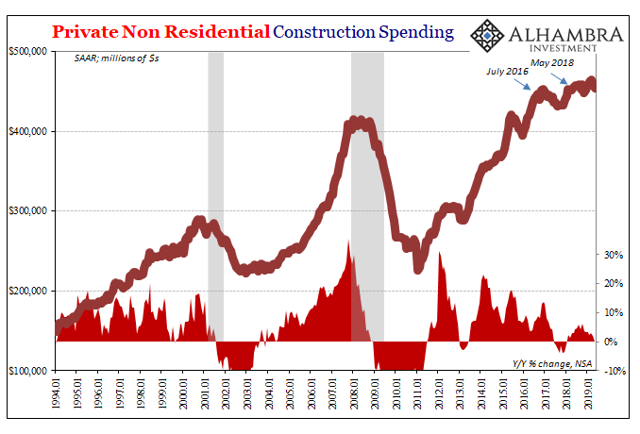 After a brief rebound at the beginning of 2018 (tax cuts?), capex spending has stagnated at best. This goes back to last May. During this May, 2019, construction was down 0.1% (unadjusted) year over year, the first contraction since 2017.

It isn't likely coincidence that businesses have struggled in this crucial supply-side activity dating back to the same month which contained May 29. Financing is an integral factor behind construction. Credit conditions are highly relevant here as one of the more direct channels.

Should liquidity be an issue in, say, a global dollar shortage, that can become a big one for real economy participants seeking to borrow and fund building programs.

The same is also true for residential construction. Not only do prospective home owners have to borrow for what will be built, the builders themselves are exposed to funding conditions, too. Homebuilding is a highly leveraged process.

No surprise, then, how residential construction has really fallen off dating back to the same point last May. What is increasingly like a housing bust now has residential construction spending falling at near-double digit rates for the first time in almost ten years. Construction in this category was down 9.6% (unadjusted) year-over-year during May 2019, following a revised 10.3% drop in April.

Even Jay Powell will be paying close attention.

This has been attributed to mortgage rates. In the same way the clear drop-off in global trade is being blamed on "trade wars," what is now a full-scale housing market retreat is being pegged as a "policy error." The Fed got too far ahead of its projections, raised rates too much, pushing the mortgage rate up beyond the capabilities of even a robust economy. 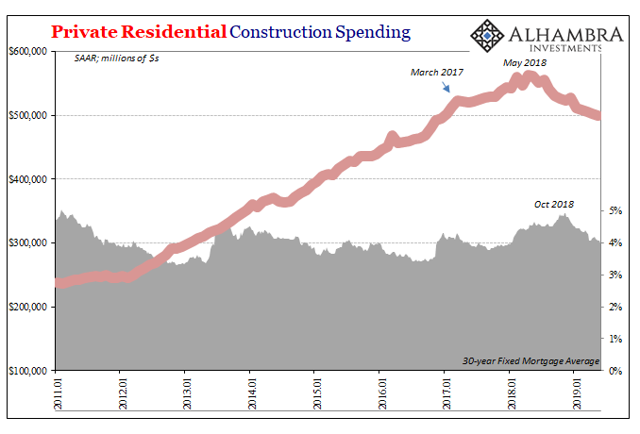 It is a nice (sounding) story in which only some parts are actually true. Contrary to popular belief, the Federal Reserve does not set the mortgage rate. These are actually derived from the US Treasury market. As a result, despite the Fed's "rate hikes," mortgage rates never really rose all that far to begin with.

Furthermore, like bond yields, they peaked starting around October 2018. Dating back to last November, mortgage rates, like bond yields, have been steadily falling. In terms of the construction figures up to May 2019, that's six straight months of both dropping simultaneous to each other; mortgage interest costs and yet residential construction, too.

This would suggest factors beyond the mortgage market, those like funding issues for home builders combined with the negative macro implications of an economy less strong than advertised (the unemployment rate) hitting a landmine at the end of last year.

Lower mortgage rates aren't going to do much in the face of these other considerations.

Though it may not ultimately matter, at least as far as construction spending is concerned, we are still left with the government puzzle. State and local tax collections are now way off their reflationary pace. In fact, overall taxes on this level actually contracted by 0.8% year over year in Q4 2018. During Q1 2019, they were up by just 2%.

More concerning, it has been a sharp drop in individual income tax receipts which is responsible for this municipal situation. Even though corporate taxes have been through the roof over the last year, this far larger category of taxation directly related to the overall employment condition and jobs market is suggesting more than the usual weakness. 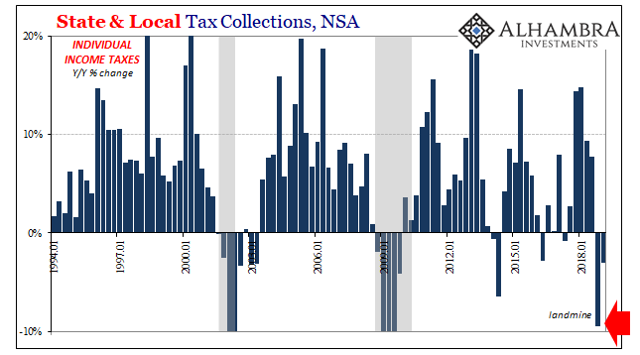 In the same quarter as the bond market landmine, Q4 2018, the Census Bureau estimates that state and local governments saw nearly 10% fewer dollar receipts than they did during Q4 2017. This decline continued in Q1 2019 with another 3.1% contraction.

Those were, obviously, the same two quarters in which residential construction spending really started to reverse. All of which adds the macro factor back into the mix; meaning, the employment market - at least by way of tax receipts and home building - is not, cannot be, at all what the unemployment rate says. This is serious economic distress being indicated by some fundamental economic properties, and that's why it wouldn't matter what the mortgage rate was or was doing.

Since state and local government officials get their economic projections from the same place as everyone else, it isn't too hard to imagine them seeing this landmine in their tax collections and writing it off as a transitory factor like Jay Powell says. Instead, they are spending on construction projects like the unemployment rate is at a 50-year low. Which it is.

That's a huge problem because everything else suggests Euro$ #4, and more than that how Euro$ #4 may be nastier than perhaps the two which have preceded it. How does Jay Powell get to a rate cut at the end of this month? Finding out the landmine actually was a real thing, in global money as well as domestic economy, would be one way.

Arguably even more than the stock market, everyone knows the Federal Reserve is highly sensitive to housing. 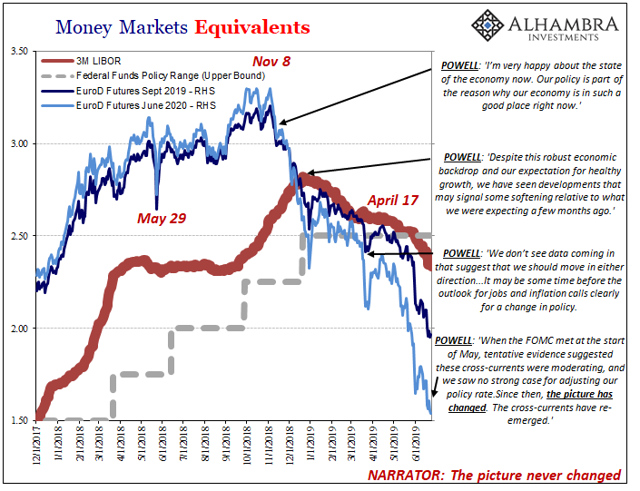