Wednesday July 3: Five things the markets are talking about

With volumes low and markets skittish, global sovereign bonds have managed to extend their month's gains ahead of July 4 celebrations stateside tomorrow on the back of weaker economic data. Equities have traded mixed in the overnight session as US ten-year Treasury note yields fall to their lowest yields in three-years on fading hopes over the Sino-US trade deal and the possibility of fresh tariff hostilities with Europe.

Providing strength to the markets 'dovish' tone is the nomination of Christine Lagarde to take the reins of the ECB later this year with many believing that she is willing to provide further market stimulus.

Expect today to be a very quiet day stateside with US private hiring, factory orders and the services sector being delivered before an early close. The highlight of this week will be this Friday's non-farm payroll (NFP) report.

Elsewhere, oil has come off its lows after an industry report showed a contraction in US crude stockpiles last week and gold rallied to print a one-week high helped by a 'subdued' dollar as renewed concerns over global trade encourages safe-haven demand.

On tap: US markets will close early today and all day tomorrow. US and Canadian job reports are due Friday.

In Japan, stocks fell overnight, pressured by a stronger yen (¥107.70) and profit taking among exporter stocks ahead of July 4th celebrations and jobs data. The Nikkei share average ended -0.5% lower while the broader Topix dropped -0.7%.

In Europe, regional bourses are trading higher and are happy to continue with their positive momentum on the back of record low yields across the region. 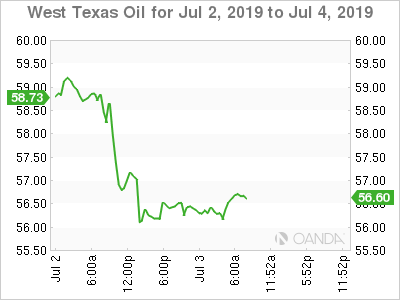 2. Oil steady on US stockpile drop

Oil prices are steady after yesterday's steep fall, supported by extended output cuts by OPEC+ and this despite concerns that a slowing global economy could hurt demand. Global prices are also supported by US data showing a larger-than-expected drawdown in inventories.

Note: Both benchmarks fell more than -4% yesterday on investor worries about a slowing global economy.

OPEC+ agreed Tuesday to extend oil supply cuts until March 2020 as members overcame differences to try to prop up prices.

API data yesterday showed that that US crude inventories fell by -5M barrels last week, more than the expected decrease of -3M barrels. Expect investors to take their cues from today's API report at 10:30 am.

Ahead of the US open, gold prices have climbed over +1% in the overnight session to hit a one-week high, helped by a subdued 'big' dollar on renewed concerns over global trade which have encouraged safe-haven demand. Spot gold has rallied +1.1% at +$1,433.50 per ounce, while US gold futures are up +2.1% at +$1,437.7 an ounce. 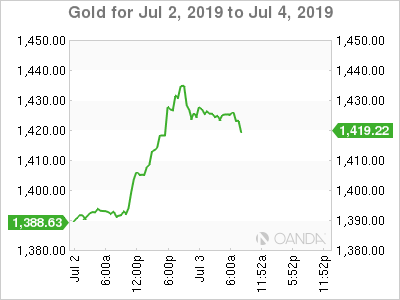 The market is anticipating that Lagarde will oversee further quantitative easing, following her statement after the G-20 meeting that "the global economy has hit a rough patch, with trade as the primary risk."

Other bond yields are also under pressure across Europe as the market bets on more interest-rate cuts and bond buying as the region is expected to suffer low growth and low inflation rates. Italy's 10-year bond yields have fallen to +1.741%.

Earlier this morning, Sweden Riksbank left interest rates unchanged and reiterated its forward guidance that it expected to raise rates at the end of this year or the beginning of next year. 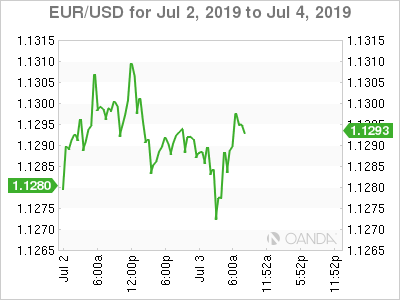 4. Dollar in demand ahead of break

EUR/USD (€1.1270) remains on "soft" footing as ECB would likely loosen monetary policy in the coming months after announcements that IMF's Lagarde was set to succeed Mario Draghi as the ECB's President. Dealers noted that Lagarde was likely seen to continue the ECB's easy-money policy stance.

GBP/USD (£1.2574) is softer by -0.2% in the aftermath of Bank of England's (BoE) Governor Carney cautious comments on growth yesterday. PMI Services data (see below) for last month also missed expectations and barely stayed in expansion territory. Markets are currently pricing in a BoE rate cut by August 2020.

EUR/SEK (€10.5158) is lower after Sweden's Riksbank maintained its forward guidance that the next rate move would be higher despite concerns of the global economy. The policy statement also reiterated that inflation was close to +2% target and if conditions changed then monetary policy would be adjusted. 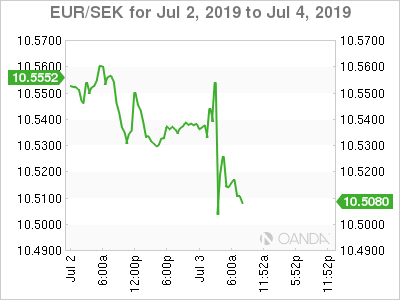 Data this morning showed that the UK economy slowed sharply in the three-months through June as businesses remained uncertain about when and how the country will leave the EU.

The UK Purchasing Managers Index (PMI) fell to 50.2 in June from 51.0 in May, pointing to stagnation.

Note: Surveys for manufacturing and construction released earlier this week signaled declines in activity in both sectors during June.

IHS Markit said the readings across all sectors point to a slight contraction in the economy. "The latest downturn has followed a gradual deterioration in demand over the past year as Brexit-related uncertainty has increasingly exacerbated the impact of a broader global economic slowdown," said Chris Williamson, chief business economist at IHS Markit. 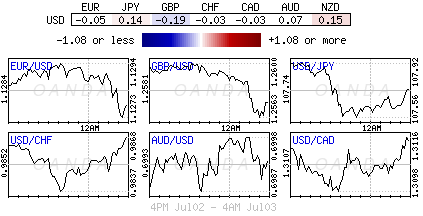