Shares of Corvus Pharmaceuticals (NASDAQ:CRVS) have lost over half their value in the past three years and are in the red by 40% over the past 12 months. The company has lost a third of its market capitalization since I introduced this one in ROTY in August last year, noting they had an ace under their sleeve with a preclinical program that caught my attention.

Recently, the stock has seen some insider buying, including multiple purchases by OrbiMed Advisors and a couple directors. One of the latter, Richard Miller, was co-founder and CEO of Pharmacyclics (led the initial discovery and development efforts for ibrutinib, whose success led to the sale of the company for $21 billion to AbbVie (ABBV)).

When looking at charts, clarity often comes from taking a look at distinct time frames in order to determine important technical levels to get a feel for what's going on. In the first chart (daily advanced), we can see the sickening downtrend in 2H 2018 as successive data updated for lead clinical programs failed to excite Wall Street. From there, July's impressive bounce appears to have legs as insider buying foreshadows important catalysts in the second half of the year (especially initial data at ASH for ITK inhibitor CPI-818).

In my initial article, I touched on the following keys to the bullish thesis:

Let's take a look at what's changed since to determine if there's a near-term opportunity for readers to take advantage of.

CEO Richard Miller's presentation in early June was quite insightful, with a few key takeaways I wish to share:

- Miller starts by stating that the company remains the leader in the field (adenosine axis), treated over 300 patients on various clinical trials with various adenosine modulators.

- Miller skips to data recently presented at ASCO for CPI-006 (anti-CD73 antibody), noting that it blocks catalytic activity (conversion of adenosine) and also stimulates immunomodulatory activity on CD73 positive cells. The ongoing phase 1 trial in patients with advanced cancers utilizes a 3 by 3 design, including a single agent arm as well as a combination arm with ciforadenant and a third arm combo with pembrolizumab (not opened yet). 12 patients received monotherapy, 8 received combination, and median prior therapies was 4. There were no dose limiting toxicities observed so far, and maximum tolerated dose not reached yet. Not much effect is observed at lower doses, but at higher doses, we can see signs of improved disease control. Certain case studies were encouraging, including a 72-year-old patient with end stage prostate cancer with decrease in target lesion upon receiving 6 mg/kg of study drug (treatment ongoing through 11 cycles). Slide 18 shows that Corvus' antibody is the only one with effects on immune function.

- Interestingly enough, a series of 8 genes induced by adenosine (adenosine gene expression signature) were observed in all renal cell cancer patients who responded to treatment with ciforadenant. Having such a marker to predict response should prove very helpful going forward (adenosine in tumor, treatment adenosine antagonist makes sense). Genentech data in over 400 RCC patients identified a myeloid signature associated with lack of response to PD-1 or PD-L1 (has been confirmed by other companies, a negative predictor). Hypothesis means that presence of adenosine could explain why these patients are not responding to PD-1/PD-L1 (sets stage for study using this signature to treat patients with checkpoint inhibitor plus adenosine antagonist). The signature is also present in quite a few other cancers (renal cell cancer 50% positive for this signature, colon cancer seems to be high, gastric cancer, and others). This could be exciting as certain cancers haven't been treatable with immunotherapy approach, so this could offer a way to make inroads.

- As for ITK inhibitor CPI-818, Miller reiterates that the team responsible for BTK inhibitor ibrutinib is the same one that discovered this asset and is progressing it forward. This drug blocks ITK and is in phase 1 trial for T cell lymphomas (dose escalation, find maximum tolerated dose, PK/PD, then open expansion cohorts).

- As of March 31, the company had $105.8 million with cash burn forecast of $43 million (Miller feels they've been efficient with cash use). Net loss for the quarter fell to $11.6 million, while research and development expenses totaled $9.4 million.

- As for near-term milestones, Miller notes they tend to present at almost every major meeting. More data for lead programs will be interesting, but I remain most interested in data for CPI-818 in T cell lymphoma (uses language later this year or early next year, meaning they might not have it ready for ASH in December). 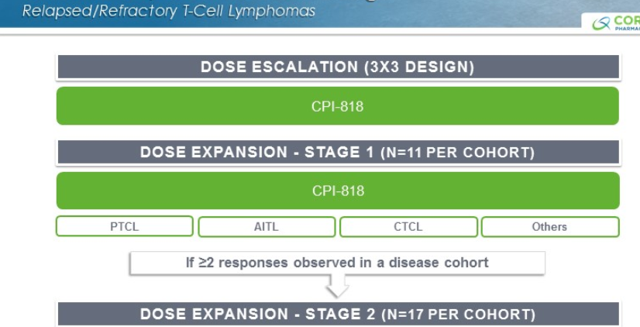 To conclude, it's becoming increasingly evident that a turnaround could be in the works for this small oncology company. Data for a key asset (CPI-818) will be forthcoming toward the end of this year or early 2020, and pedigree of management team lends more credibility to the story despite previous poor performance for the stock. Insider buying and identification of an important biomarker for lead program that could open up new opportunities for innovative trial design are also encouraging.

For readers who are interested in the story and have done their due diligence, I suggest establishing a pilot position in the near term and patiently accumulating dips.

Risks include disappointing data for CPI-818 and lead programs at upcoming medical meetings, setbacks in the clinic, substantial competition in certain spaces targeted such as renal cancer and disappointing regulatory guidance.

For our purposes in ROTY, I'd prefer to receive more concrete guidance on when exactly we can expect initial data for CPI-818 (and possibly wait for initial efficacy data to get that element of derisking/downside cushion we search for).

As a reminder to all my readers, July 8th is the deadline to lock in legacy pricing for ROTY before our price increase (see my blog post).

We are a unique 500+ member community of experienced biotech investors, profitable traders, industry veterans and novices. Our group is known for its pursuit of profits, continuous improvement and generous sharing of due diligence & knowledge.