With the trade war in full swing and the USA attacking many of its trading partners over perceived unfairness in trade relationships, what would happen if Brazil dumped its considerable holding of Treasuries into the secondary market or chose not to buy any more Treasuries and let the remainder roll off into cash?

A knowledge of reserve banking shows that this would have little to no effect on anything other than market sentiment.

You could do the same thing to punish your bank by moving your savings to your checking account, and it would have the same effect on you. You would earn no interest on your dollars.

Many market commentators and conspiracy theorists are postulating that angry international trading partners might dump their rather significant holdings of US Treasuries as revenge for US trade tariffs, boycotts, bans, and sanctions.

The chart below shows the amount of Treasuries held by foreign countries at present.

Brazil has over $300B. These Treasuries came into being as a result of Brazil's export income from international trade with America. It represents the dollarized monetization of decades of imports from Brazil shown in the chart below.

What is it that the USA is importing that has led to such a large stock of Treasury savings in the Brazilian account? The chart below provides an idea. 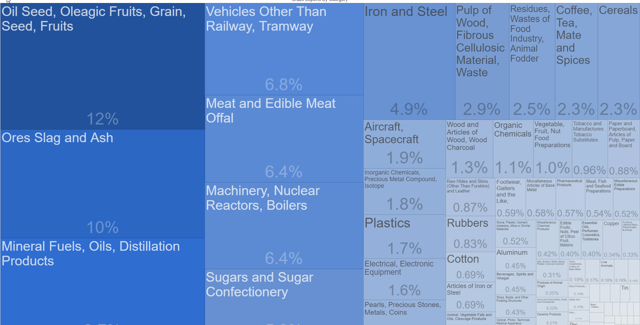 External trade has a small influence on the Brazilian economy as this report shows. Foreign trade is less than 1% of GDP each year and is in overall deficit, meaning that it is gaining the real benefits of real goods and services in its private domestic sector rather than building up paper claims on wealth in other countries. The USA, for example, is similarly not so dependent on trade and the external balance represents only about 2% of GDP as this report shows.

The Brazilians have sent real goods and services to America for decades and are happy to save the income as dollars at the Fed and place them in Treasury accounts to earn interest.

The thousands of businesses that export to America all have an account with a US bank that in turn has an account at the Federal Reserve Bank (Fed). In these American bank accounts, the dollars accumulate as goods and services from Brazil are bought and paid for by domestic Americans. The dollars move from a local American's bank account to a US bank account in the name of a Brazilian entity. The Fed groups the bank accounts under a sub-account for Brazil.

In theory, the Brazilian entity could spend those US dollars and buy anything offered for sale in US dollars. The dollars could re-enter the US domestic economy in return for US goods and services or assets, or move to another foreign dollar holder in exchange for something else.

The point to remember is that the dollars never leave the Fed's spreadsheet. All that happens is that they change ownership in exchange for goods and services. The Fed marks accounts up and down to track the dollar movement like a referee keeping the score at a football game. Just like a referee, the Fed creates dollars out of thin air as required in the same way a referee makes points.

US law prevents the Brazilian and other foreigners from buying anything significant for sale in US dollars (more than 5% of shares in a company and strict absolute dollar limits) and have little choice but to put 95% their excess dollar holdings into a savings account and earn some interest. Foreigners are encouraged to buy US Treasuries (that accrue a coupon payment like a term deposit savings account) with their surplus dollars rather than keep the dollars in their checking account earning no interest. A checking account at the Fed is known as a Reserve account. (Checking = Reserve and Saving = Treasury in Fed terminology, Reserves = Money, the Federal Reserve System could alternatively be named the "Federal Money System" and lose some of its mystique).

Since 1960 the United States has drawn on world resources through a novel monetary process: by running balance-of-payments deficits that it refuses to settle in gold, it has obliged foreign governments to invest their surplus dollar holdings in Treasury bills, that is, to relend their dollar inflows to the U.S. Treasury. - (Hudson, Michael. Global Fracture: The New International Economic Order (p. 17). Pluto Press. Kindle Edition.)

At the moment the Brazilian export earnings are in a savings account known as a Treasury instead of dollars in a checking account earning nothing. If they move their dollars from savings to checking, they get no interest earnings on their dollars, just like you at your bank.

Here it gets tricky and departs from your knowledge of banking and enters the world of international reserve banking that practically nobody outside of the industry understands.

If the Brazilians, en masse, moved their Treasuries (savings) to reserves (checking), the US primary dealer bank that holds their US bank account for them would then have excess reserves and buy Treasuries with them, and so the interest income would go to the primary dealer bank where the Brazilians have their bank account. The interest income would go into the private domestic sector via the interest on excess reserves or interest on Treasury deposits bank income channel. The interest income becomes income for the private domestic sector (the banks) as the flow diverts from an external entity to a domestic entity.

No sensible country with knowledge of reserve banking would choose to hold their dollar export earnings in cash rather than interest-earning Treasuries.

There would be no sudden interest rate change. The Fed's mandate is to maintain its Federal Funds target Rate (FFR) by buying and selling Treasury bonds. If the Brazilians exited Treasuries, the excess liquidity would be immediately mopped up with a bond sale to whichever bank held the excess cash. If the Fed did not do this, the excess bank reserves sitting in the banking system would push the interest down below target.

There would be no exchange rate implications as the number of dollars and Treasuries on issue remain the same. All that happens is a portfolio swap - paper assets for cash, a wash.

The most likely thing to happen from the Brazilians, or any other primary holder of US Treasuries, exiting their Treasury holdings would be a brief market panic brought about by news headlines informing the public of the event and drawing the wrong conclusions from it and adding to the fear and misinformation.

So it is not going to happen, and if it does, it does not matter.

The worst thing that can happen is that the rest of the world decides to no longer send real goods and services to the US in exchange for dollar credits on the Fed's computer. Then we will have to make them ourselves. This would import jobs, pollution, and inflation given that the reason we import those things in the first place is that they are cheaper to make and produce overseas (generally because of the lower environmental and labor protection standards). Not importing means buying the more expensive domestic offering using resources that might have been better employed on some other more efficient tasks.

So one can comfortably buy US Treasuries in the knowledge that they remain a risk-free income-producing asset (TLT) (TBT) (IEF) in the largest and most liquid bond market in the world.

Alan Longbon
2.36K Followers
My investment approach is very simple. I find countries with the highest and strongest macro-fiscal flows and low levels of private debt and invest in them using country ETFs and contract for difference (CFDs)I use functional finance and sectoral flow analysis of the national accounts of the nations I invest in. This is after the work of Professors Wynne Godley, Micheal Hudson, Steve Keen, and William Mitchell. Roger Malcolm Mitchell, Warren Mosler, Robert P Balan, and many others.One can analyze a country in seconds with four numbers as a % of GDP and these are G P X C where[G] Federal spending.[P] Non-Federal Spending.[X] Net Exports[C] CreditOne can then derive a set of accounting identities that are correct by definition.GDP = G + P + XAggregate Demand = G + P + X + C or GDP + Credit.GDP = GDIG and X are regularly reported in official national account statistics and one can work out P as follows:P = G + XAsset prices rise best where the macro-fiscal flows are strongest and where the private sector balance is highest.The 20-year land/credit cycle identified by Fred Harrison and Phillip Anderson is also a key investment framework that I take into account.
Follow