Shares of Acacia Communications (NASDAQ:ACIA) have remained rangebound over the past few months as the company as a whole has been going through a phase of transitory slowdown. But things may change for the optical networking company and its shareholders in the months ahead. Acacia has a number of catalysts lined up for the next few quarters – speed upgrades and demand resumption – which can bolster its financials and its share price going forward. 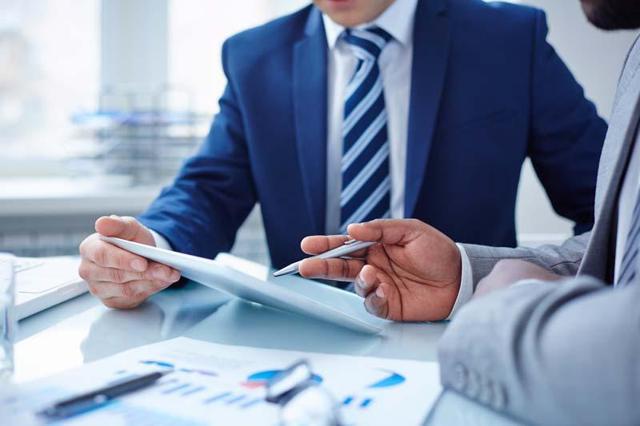 Let’s start with the risk factor first. Acacia Communications has a significant exposure to China. It provides a segregation of its revenues based on the ship-to-locations of its customers, or their contract manufacturers, and the company actually generated about 41% of its revenues from China in the last quarter. Needless to say, fluctuations in the Chinese market stands to impact Acacia’s financials to a significant degree. 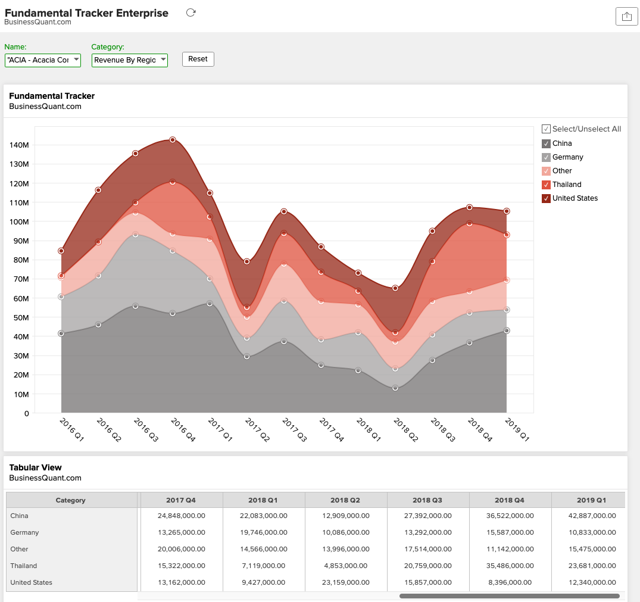 Its exposure to China is actually one of the reasons why the stock got hammered recently. US regulators blacklisted Huawei along with over 70 other companies back in May. Acacia’s stock fell shortly after because it has a trade relationship with Huawei. The former later clarified that the relationship amounted to only about 1.5% of its overall revenues in FY18 but its shares have remained distressed ever since.

Acacia’s management didn’t mention any of its other customers in their press release which suggest that the direct impact of this blacklisting order on the company was limited to just about that. But the indirect risk factor for Acacia here is that if geopolitical tensions between US and China continue, there could be an industry-wide slowdown of network-related capex in China which can hurt Acacia and other such companies financially.

With that said, readers and investors should note that the networking industry, including both platform providers and components manufacturers, is approaching an inflection point. Several telecom companies are deploying 5G networks internationally to remain competitive in the cutthroat wireless space.

This isn’t a switch where we push a button and networks get upgraded from 4G to 5G overnight. Rather, actual hardware upgrades and months of architectural planning is needed. Lightcounting estimates that telecom companies will drive the demand for port shipments in the coming years. 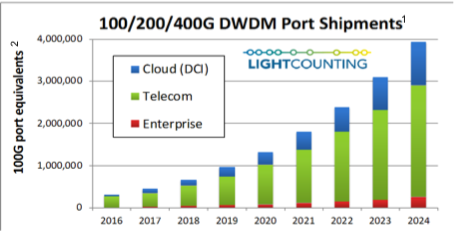 Note that the demand trends aren’t erratic or abrupt. Lightcounting is estimating sustained demand increase in port shipments and that too in meaningful quantities over the years to come. This is one aspect that’s bound to benefit companies such as Acacia that help in powering up networking infrastructure.

The Data Center Interconnect space would see a demand increase as well, although to a lesser extent. 5G will be enabling more wireless applications and it should ideally result in more data or content creation. If datacenters don’t keep up with network upgrades, they could risk network saturation/bottlenecks.

Fact of the matter is that Acacia is actually seeing healthy demand trends from China as well. From their Q1 FY19 earnings call:

[Our] NEM customers as well as service providers in China are telling us that they are continuing to see progress on tender activity in preparation for capacity upgrades to service providers existing backbone networks.

So, what does this mean for investors?

Investors who believe trade tensions between US and China will ease and their bilateral trade will normalize in the coming months, should consider buying into Acacia while its shares are still distressed. Industry tailwinds can bolster its financials over the coming quarters and also the management is actively working towards releasing new products to ensure Acacia remains competitive – as discussed in the next section of this article.

Now Acacia isn’t relying solely on industry tailwinds to drive its growth going forward. Its engineering teams and management have actively worked towards rolling out modules with significantly higher bandwidth specifications and they're now looking to capitalize on their invested efforts.

For instance, Acacia began the mass production of its AC1200 coherent modules in Q4 FY18. It’s replacing AC-400 embedded modules which had been announced back in March 2015. It’s not a rebranding of some sorts; Acacia actually overhauled the modules to tackle today’s networking challenges.

Although financial specifics pertaining to AC1200 aren’t available in the public domain, the company notes that “AC1200 supports transmission speeds of up to 1.2 Tbps in a footprint which is 40% less than the size of a 5” x 7” module supporting 400 Gbps today [AC-400]. The versatile AC1200 will support multiple network applications, including Cloud/DCI, metro, long-haul and submarine.”

The company also has 400ZR and 400ZR Plus products in the works. They’re currently being sampled, so I suppose their mass production would begin in about a year from now. But overall, these 400G pluggable modules replace 200G CFP2 DCO modules that were announced back in December 2017.

Once its product portfolio is refreshed, I believe Acacia will be ready to meet the growing networking challenges for another next 2 years at least. 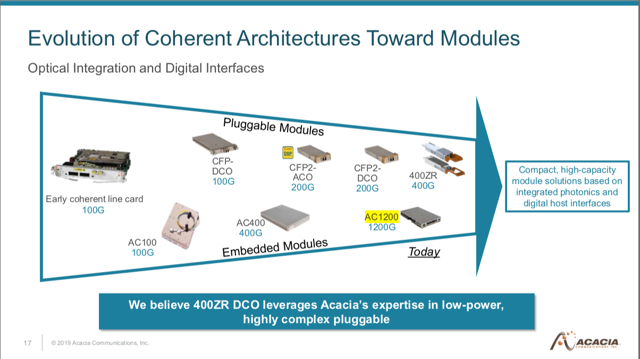 These architectural upgrades are meaningful for Acacia because:

I wouldn’t deny, Acacia’s revenue exposure to China would make it a volatile investment over the short to medium term time horizon. A further escalation of trade-related tensions between US and China might as well hurt global supply chains and force impacted manufacturers to relocate production facilities.

This is where readers and investors need to make a call. If you believe that trade tensions between the two economic giants will ease, and bilateral trade will normalize, then investing in Acacia makes a lot of sense. The company is doing well operationally and its new products only stand to bolster its financial growth for the next couple of years at least. This chain of thought essentially suggests that Acacia is a buying opportunity as and when its shares fall further due to geopolitical tensions.

On the other hand, if you’re of the opinion that the trade-war will continue for several more months, or even quarters, then you might want to avoid investing in the company altogether due to its heavy exposure to China and deploy that cash elsewhere.

Author’s Note: I’ll be writing another report on Acacia Communications later this month, you can click the “Follow” button at the top of this page to stay updated. Thanks!

Business Quant
23.12K Followers
Business Quant is a comprehensive investment research platform. It hosts KPI data, financial data and analytical tools to help you become a better investor. You don’t have to go through boring SEC filings to keep a track of AT&T’s subscriber count, Apple’s revenue from iPhones or Disney’s revenue by region. Our Granular KPI Data tool does that for you and it does so much more. Get an edge over the market, from day one. Watch Business Quant in action here.